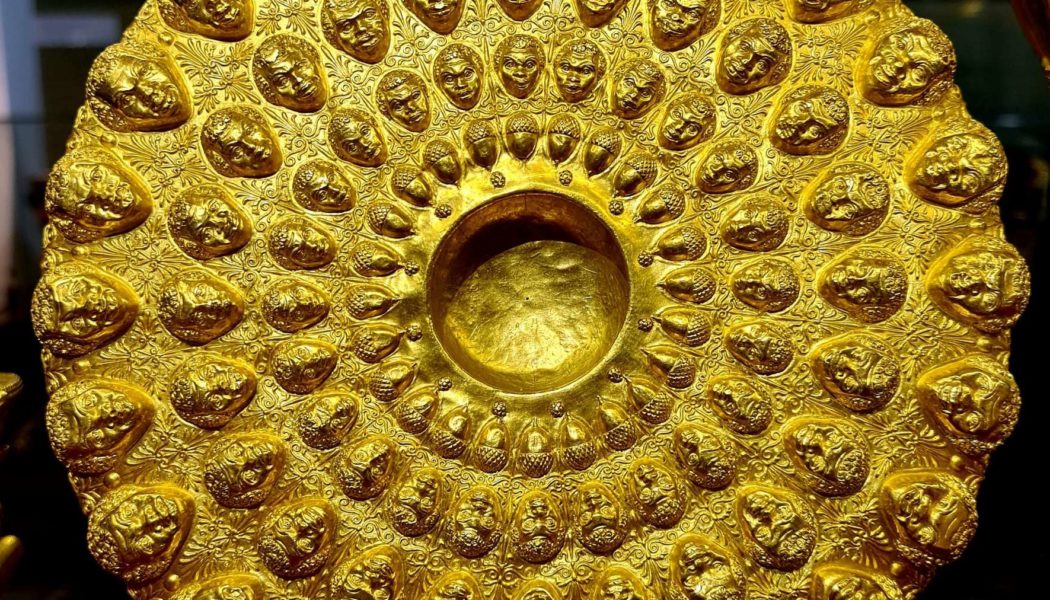 Metal detectorists have uncovered some of history’s most exciting hoards: caches of coins, jewels, and precious metals that were sometimes hidden in the ground in times of trouble. The people who buried their treasures usually expected to go back later and retrieve them, but the hoards featured here were never picked up by their owners. As a result, many hundreds of years later, metal detectorists and archaeologists experienced the excitement of unearthing these ancient treasures. Here’s what they found in 11 of the most dazzling hoards ever discovered.

In 2009, in a field in Staffordshire, UK, amateur metal detectorist Terry Herbert uncovered the largest hoard of Anglo-Saxon gold and silver ever found. The artifacts came to be known as the Staffordshire Hoard, and experts hailed it as “one of the greatest finds” in British archaeology.

The treasure is believed to have been buried around 600-650 CE when the Anglo-Saxon kingdoms of Britain were at war with one another. The hoard represents only objects used by male warriors, indicating that the items had high status. It includes over 500 gold sword pommels—which researchers say suggest that warriors as well as kings carried such valuable weapons into war—as well as nearly 9 pounds of gold objects, 3 pounds of silver, and many fine garnets. Herbert and the owner of the field where it was discovered shared a £3.3 million payment from the museum that acquired it.

A medieval coin was found in a field in Sluskow, Poland, in 1935. Several decades later, local archaeologist Adam Kędzierski decided to see if there could be more. To his delight, he unearthed a trove of over 6000 pieces of medieval treasure in early 2021.

The hoard, estimated to be more than 900 years old, had been stashed inside linen pouches and buried in a pot. The treasure included Czech, Danish, Hungarian, and German coins, plus a number of jeweled rings. One of the gold rings was inscribed in Cyrillic with the words, “Lord, may you help your servant Maria.” Kędzierski speculated that this ring could have belonged to a local princess, pointing the way for future research on the tantalizing trove.

Not all hoards are significant because they’re large hauls. Some prove to be of special interest due to the rarity of finds within them. The Watlington Hoard, discovered by detectorist James Mather in Oxfordshire, UK, in 2015, is a prime example.

For years, metal detectorists had been finding coins scattered in the same field on the Channel Island of Jersey—and in 2012, Richard Miles and Reg Mead discovered a much larger object. Archaeologists were called in, and after two days of excavation, they uncovered an enormous mass of over 70,000 coins, fused together by corrosion.

Further investigation revealed that the coins were of a silver-copper alloy made by the Coriosolites, a tribe of Celts from nearby France, around the 1st century BCE. Over many years, archaeologists worked to disassemble the hoard piece by piece, revealing that it contained not only coins but glass beads, gold torques (metal neck rings), and silver bracelets. The huge cache was purchased by the government for £4.25 million and will remain in Jersey.

Metal detectorist Ole Ginnerup Schytz stumbled onto a hoard of 22 gold objects, weighing more than 2 pounds and dating from the 6th century CE, in Vindelev, Denmark, in 2021. Among the objects were beautifully decorated gold discs, known as bracteates. The bracteates feature runic inscriptions, the profile of a man’s head, and different birds and animals.

Researchers think that the hoard was originally buried underneath an Iron Age longhouse and the value of the objects suggest that their owner was of high status. Scholars have speculated that the treasure may have been buried after the catastrophic volcanic eruption in the region in 536 CE, which caused widespread famine and turmoil.

6. The Vale of York Hoard

One of the most important Viking-related hoards in Britain was unearthed in 2007, when metal detectorists David and Andrew Whelan discovered a cache of Nordic treasure in Yorkshire. Most of the objects were found inside a beautiful silver vessel likely made in France or Germany in the 9th century CE, which may have been looted from a monastery.

The hoard offers a fascinating glimpse into the Vikings’ international connections: It contained items from Afghanistan, Ireland, Russia, and Scandinavia. Archaeologists think the hoard was buried by an elite Viking in 927 CE, just after Anglo-Saxon King Athelstan conquered the Viking stronghold of Northumbria. The treasure was valued at the time at over £1 million.

This hoard of Roman coins was found by metal detectorist Brian Malin in Oxfordshire in 2003. He took the pot full of corroded coins to specialists at the British Museum, who then very carefully began to clean and separate the coins. It was only after they had extracted the roughly 5000 pieces that they realized they had found one very intriguing specimen—a coin featuring the head of the virtually unknown Roman emperor Domitianus.

Another coin featuring Domitianus had been found in France a century earlier, but because historians weren’t aware of the emperor, the find was dismissed as a hoax. The discovery of the second coin confirmed that the French coin was legit. The extreme rarity of the piece and the scant written references to this “lost” emperor suggest that he may have held the title only for a short time during a period of crisis in the Roman Empire.

The Galloway Hoard, discovered by metal detectorist Derek McLennan in southwest Scotland in 2014, includes a huge amount of silver and gold objects. Aside from the dazzling metals, the hoard’s most interesting quality was the rarity of some of the objects, which cast new light on the Viking age in Scotland. Some of the more memorable items in the hoard were a gold bird-shaped pin, unique Anglo-Saxon brooches, a rock-crystal flask, and a silver pectoral pendant cross.

A Christian cross is an especially unusual artifact to find in a Viking context. Archaeologists have speculated that it may have been kept for melting down into ingots; there were several silver ingots in the hoard. The treasure was buried in around 900 CE, making it the earliest Viking hoard ever found in Scotland. It was valued at nearly £2 million.

Historian and metal detectorist Jim Bailey uncovered a small hoard of coins, musket balls, and a shoe buckle buried in a fruit orchard in Middletown, Rhode Island, in 2014. When he examined his finds more closely, he was astonished to realize that one was a Yemeni coin called a khamsiyat, minted in 1693.

Since then, more detectorists across New England have unearthed Arabian coins, leading researchers to suggest that they represent remnants of pirate booty. In 1695, notorious pirate Captain Henry Every raided the Ganj-i-Sawai, a ship owned by an Indian emperor. Every made off with a huge booty, including many coins. The Arabian pieces found in New England may be evidence of the pirates landing in the area and spending their spoils locally.

In December 1949, brothers Pavel, Petko, and Michail Deikov were digging in the grounds of a ceramic factory near Panagyurishte, Bulgaria, gathering clay to make bricks. They stumbled upon an astonishing find: a cache of beautifully crafted gold objects. Archaeologists excavated the treasure, and declared that it represented items from the 3rd and 4th centuries BCE.

Some of the hoard may have belonged to Thracian king Seuthes III for use as ceremonial objects. The hoard included an embossed circular gold dish, ritual goblets made in the shape of animals, and a double-handled gold amphora. Today the treasure is often on display at the National Museum of History in Sofia, Bulgaria.

Metal detectorist Eric Lawes had been tasked with finding a lost hammer in a field in Suffolk, but instead uncovered nearly 60 pounds of late Roman gold and silver objects. The haul, unearthed in 1992, represented the largest hoard of Roman treasure found in Britain with over 15,000 coins, numerous silver spoons, and 200 objects made of gold. The cache was valued at around £1.75 million at the time of discovery.

Archaeologists were able to carefully remove the items from the ground, which meant they were preserved in excellent condition. One of the most engaging items discovered was a silver pepper pot in the shape of a woman, which revealed that the Romans in Britain were trading with India to source their peppercorns.

This list of outdoor gift ideas includes anything from eco-friendly sunscreen and lip balm to packable blankets and coats. Disclaimer. It perfectly represents my vision, as a fun, welcoming, and friendly brand.