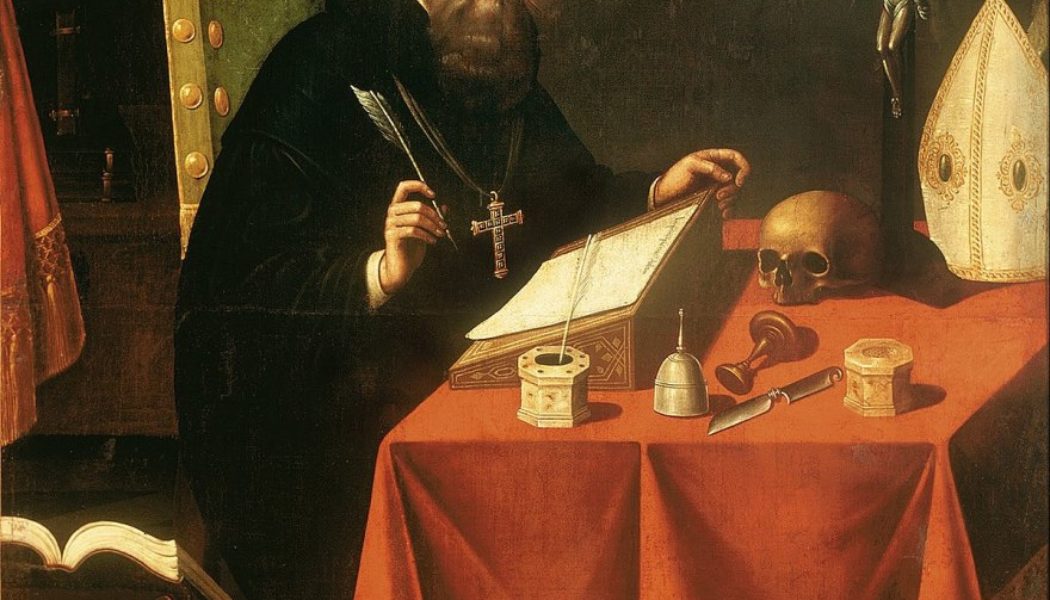 Today, we celebrate one of the great Doctors of the Church and most popular saints in all of Catholicism – Saint Augustine of Hippo. His influence on the Catholic Church has spanned the ages, 1600 years of encouraging faithful Catholics to study and know their faith. He has also brought countless sinners to the faith with his amazing conversion story chronicled in his book, The Confessions. If you have never read it, I would highly encourage it.

The quotes below come from the book, Living the Mysteries – A Guide for Unfinished Christians by Scott Hahn and Mike Aquilina. It is a book that I use to give to the people in the RCIA program when I worked in parish ministry. It is a perfect book to read during the Mystagogy period, the stage after the Easter Vigil – a time when our new Catholics have recently come into the Church. This book dives into the mysteries of the Catholic faith – the elements of the Church that the faithful receive through the sacraments.

The quotes I am about to share with come from the section – On the Church. I hope you enjoy them and will purchase the aforementioned text.

“What you see on the altar, you saw last night. But what it was, what it meant, what a great thing the sacrament contained you had not heard. What you see is bread and a chalice. That’s what your eyes tell you. But your faith demands instruction. The bread is Christ’s body; the chalice, Christ’s blood. It’s said briefly, and maybe that enough for faith. But faith desires understanding.”

Speaking on Conversion, St. Augustine says, “When you were catechumens, you were temporarily kept under the observation in the granary. Then you were named on the list. Then began the process the grinding, through fasts and exorcisms. Afterward, you came to the water: You were sprinkled, and you all were made into one dough. You were baked by the heat of the Holy Spirit, and you became the Lord’s bread.”

It’s as if he wrote this today – “Don’t be surprised at the multitude of bad Christians who fill the church, who go up to the altar for Communion, who make a big deal of praising the bishop or priest when he speaks about good morals…They can be with us in the Church at this time, but, after the resurrection, they will be unable to remain in the congregation of saints. The Church of this time had good mixed with bad. It is like a threshing floor, where grain is mixed with chaff, good members mixed together with evil.”

“The Church, then, begins its reign now, with Christ, in the living and the dead. For, as the apostle says, ‘To this end Christ died and lived again, that he might be Lord both of the dead and the living’ (Rom 14:9) …But we should take part for the whole and understand this passage to include all others who belong to the Church, which is the kingdom of Christ.”

“These are great and mighty sacraments! Do you want to know how they are commended to us? The apostle says, ‘Whoever, therefore, eats the bread or drinks the cup of the Lord in an unworthy manner will be guilty of profaning the body and blood of the Lord’ (1 Cor 11:27). What is receiving unworthily? To receive a joke, to receive in contempt. Don’t belittle the sacrament just because you can look upon it. What you see passes away; but the invisible, the thing that is signified, does not pass away, but remains.”

Saint Augustine of Hippo…Pray for Us.