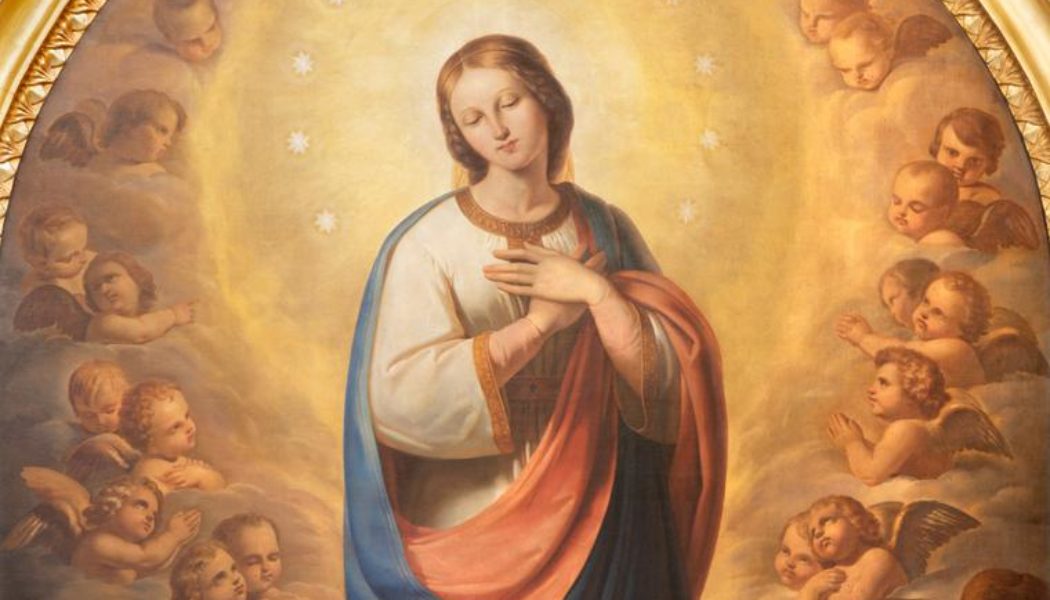 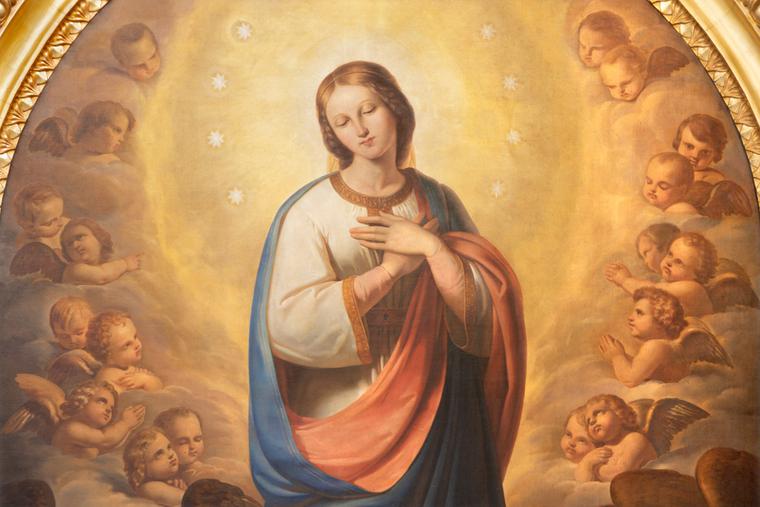 December 8th marks the feast of the Immaculate Conception. It celebrates an important point of Catholic teaching, and it is a holy day of obligation.

Here are 8 things you need to know about the teaching and the way we celebrate it.

1. Who does the Immaculate Conception refer to?

There’s a popular idea that it refers to Jesus’ conception by the Virgin Mary.

Instead, it refers to the special way in which the Virgin Mary herself was conceived.

This conception was not virginal. (That is, she had a human father as well as a human mother.) But it was special and unique in another way. . .

2. What is the Immaculate Conception?

The Catechism of the Catholic Church explains it this way:

490 To become the mother of the Saviour, Mary “was enriched by God with gifts appropriate to such a role.” The angel Gabriel at the moment of the annunciation salutes her as “full of grace”.  In fact, in order for Mary to be able to give the free assent of her faith to the announcement of her vocation, it was necessary that she be wholly borne by God’s grace.

491 Through the centuries the Church has become ever more aware that Mary, “full of grace” through God, was redeemed from the moment of her conception. That is what the dogma of the Immaculate Conception confesses, as Pope Pius IX proclaimed in 1854:

The most Blessed Virgin Mary was, from the first moment of her conception, by a singular grace and privilege of almighty God and by virtue of the merits of Jesus Christ, Saviour of the human race, preserved immune from all stain of original sin.

3. Does this mean Mary never sinned?

Yes. Because of the way redemption was applied to Mary at the moment of her conception, she not only was protected from contracting original sin but also personal sin. The Catechism explains:

493 The Fathers of the Eastern tradition call the Mother of God “the All-Holy” (Panagia), and celebrate her as “free from any stain of sin, as though fashioned by the Holy Spirit and formed as a new creature”.  By the grace of God Mary remained free of every personal sin her whole life long. “Let it be done to me according to your word. . .”

4. Does this mean Mary didn’t need Jesus to die on the Cross for her?

No. What we’ve already quoted states that Mary was immaculately conceived as part of her being “full of grace” and thus “redeemed from the moment of her conception” by “a singular grace and privilege of almighty God and by virtue of the merits of Jesus Christ, Saviour of the human race.”

The Catechism goes on to state:

492 The “splendour of an entirely unique holiness” by which Mary is “enriched from the first instant of her conception” comes wholly from Christ: she is “redeemed, in a more exalted fashion, by reason of the merits of her Son”.  The Father blessed Mary more than any other created person “in Christ with every spiritual blessing in the heavenly places” and chose her “in Christ before the foundation of the world, to be holy and blameless before him in love”.

508 From among the descendants of Eve, God chose the Virgin Mary to be the mother of his Son. “Full of grace”, Mary is “the most excellent fruit of redemption” (SC 103): from the first instant of her conception, she was totally preserved from the stain of original sin and she remained pure from all personal sin throughout her life.

5. How does this make Mary a parallel of Eve?

Adam and Eve were both created immaculate, without original sin or its stain. They fell from grace, and through them mankind was bound to sin.

Christ and Mary were also conceived immaculate. They remained faithful, and through them mankind was redeemed from sin.

Christ is thus the New Adam, and Mary the New Eve.

494 . . . As St. Irenaeus says, “Being obedient she became the cause of salvation for herself and for the whole human race.” Hence not a few of the early Fathers gladly assert. . .: “The knot of Eve’s disobedience was untied by Mary’s obedience: what the virgin Eve bound through her disbelief, Mary loosened by her faith.”  Comparing her with Eve, they call Mary “the Mother of the living” and frequently claim: “Death through Eve, life through Mary.”

6. How does this make Mary an icon of our own destiny?

Those who die in God’s friendship and thus go to heaven will be freed from all sin and stain of sin. We will thus all be rendered “immaculate” (Latin, immaculatus = “stainless”) if we remain faithful to God.

Even in this life, God purifies us and trains us in holiness and, if we die in his friendship but imperfectly purified, he will purify us in purgatory and render us immaculate.

By giving Mary this grace from the first moment of her conception, God showed us an image of our own destiny. He shows us that this is possible for humans by his grace.

In contemplating this mystery in a Marian perspective, we can say that “Mary, at the side of her Son, is the most perfect image of freedom and of the liberation of humanity and of the universe. It is to her as Mother and Model that the Church must look in order to understand in its completeness the meaning of her own mission” (Congregation for the Doctrine of the Faith, Libertatis conscientia, 22 March, 1986, n. 97; cf. Redemptoris Mater, n. 37).

Let us fix our gaze, then, on Mary, the icon of the pilgrim Church in the wilderness of history but on her way to the glorious destination of the heavenly Jerusalem, where she [the Church] will shine as the Bride of the Lamb, Christ the Lord [General Audience, March 14, 2001].

7. Was it necessary for God to make Mary immaculate at her conception so that she could be Jesus’ mother?

And hence they [the Church Fathers] affirmed that the Blessed Virgin was, through grace, entirely free from every stain of sin, and from all corruption of body, soul and mind; that she was always united with God and joined to him by an eternal covenant; that she was never in darkness but always in light; and that, therefore, she was entirely a fit habitation for Christ, not because of the state of her body, but because of her original grace. . . .

For it was certainly not fitting that this vessel of election should be wounded by the common injuries, since she, differing so much from the others, had only nature in common with them, not sin. In fact, it was quite fitting that, as the Only-Begotten has a Father in heaven, whom the Seraphim extol as thrice holy, so he should have a Mother on earth who would never be without the splendor of holiness [Ineffabilis Deus].

8. How do we celebrate the Immaculate Conception today?

In the Latin rite of the Catholic Church, December 8th is the solemnity of the Immaculate Conception. In the United States and in a number of other countries, it is a holy day of obligation.

When December 8th falls on Saturday, the precept of attending Mass is still observed in the United States, even though it will mean going to Mass two days in a row (since every Sunday is also a holy day of obligation). See here for more information.

Finding the ideal gift for someones garden can be challenging because no two gardens are the same. Example of inserts changing colour. , home office concept and setup (in berlin).