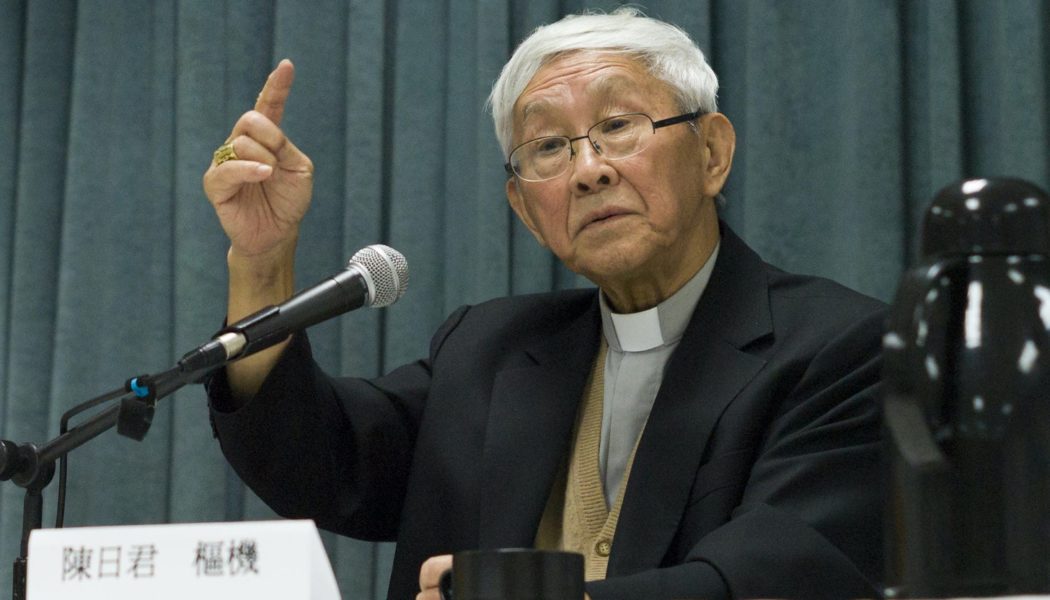 Cardinal Joseph Zen Ze-kiun, SDB, has been arrested. The 90-year old emeritus Bishop of Hong Kong was detained by authorities on Wednesday evening, over charges related to a non-profit group of which Zen is a trustee.

The cardinal’s arrest came months after state-owned Chinese media signaled that he would likely be targeted by security forces for his pro-democracy advocacy.

Zen, 90, was arrested by national security police May 11, along with Margaret Ng Ngoi-yee, a pro-democracy former member of Hong Kong’s Legislative Council, and Denise Ho Wan-sze, a well known singer. All three were arrested on charges of colluding with foreign powers, under the terms of Hong Kong’s National Security Law, which came into force in July, 2020.

The charges relate to the work of the 612 Humanitarian Relief Fund, a charity that helps political arrestees in Hong Kong defray their legal expenses. Zen, Ng, and Ho are all trustees of the charity.

After his arrest, Cardinal Zen was released Wednesday night on bail. For the latest, read here.

Catholics in Hong Kong have voiced concern about the possible arrest of Zen in recent months, since the cardinal was targeted by pro-government media earlier this year.

The government newspaper pointedly associated Zen with Jimmy Lai, the jailed Catholic newspaper publisher, and accused Zen of using his status as a clergyman to “disrupt” life in Hong Kong while lamenting that “it is difficult for the government to regulate or eliminate these religious groups or individuals, despite the fact that they have committed many crimes.”

Zen’s arrest comes just three days after John Lee Ka-chiu, a Catholic, was declared the winner of a ballot to select the new head of the Hong Kong Government. Lee was the only candidate for chief executive considered by the special administrative region’s Election Commission, following electoral reforms imposed by Beijing requiring that all candidates for public office be “patriots.” Lee will assume office later this summer, succeeding Carrie Lam, another Catholic.

Thousands of riot police were deployed over the weekend to ensure there were no public demonstrations against Lee’s election. The new chief executive previously served as security minister for Hong Kong, and was responsible for attempting to pass a controversial extradition law in 2019 which would have allowed political prisoners to be extradited to the mainland — that bill triggered nearly a year of protests which brought Hong Kong to a standstill and led to the mainland government imposing a new National Security Law in 2020, criminalizing many forms of free speech and political dissent.

Zen, along with Lai, is now one of several prominent Catholics to be arrested in Hong Kong, including Agnes Chow, the Catholic pro-democracy activist who was released from jail in June last year after serving a six-month prison sentence for attending an “unlawful” assembly in 2019.

Zen’s arrest places enormous pressure on the Holy See to break its silence on the humanitarian crisis in China and the crackdown on civil liberties in Hong Kong.

Despite the fracturing political and security situation in Hong Kong, the Holy See’s Secretariat of State has previously said it would not speak out about the crackdown on civil liberties in Hong Kong because it did not see the point in doing so.

“Obviously Hong Kong is the object of concern for us. Lebanon is a place where we perceive that we can make a positive contribution. We do not perceive that in Hong Kong,” Archbishop Paul Gallagher, who heads the Secretariat of State’s section for diplomatic relations, said last year.

“One can say a lot of, shall we say, appropriate words that would be appreciated by the international press and by many countries of the world, but I — and, I think, many of my colleagues — have yet to be convinced that it would make any difference whatever.”

The arrest of the nonagenarian cardinal comes just months before the Vatican is set to renew its controversial agreement with the Chinese government on the status of the Church in China, and follows the reassignment of the Vatican’s diplomatic head of station in Hong Kong in February, when Monsignor Javier Herrera Corona was made apostolic nuncio to the Congo and not replaced.

The Vatican-China deal, the terms of which remain unpublished, was first agreed in 2018 and hands the Communist government a role in the approval of episcopal appointments on the mainland. Additionally, Catholic clergy are required by the government (and encouraged by the Vatican) to pledge loyalty to the Communist Party and to join the state-sponsored Chinese Patriotic Catholic Association.

Those that have refused have been subject to harassment and detention, and in some cases disappeared.

The Vatican-China deal, which was renewed for a further two years in October 2020, was meant to end the schism between the Communist state-sponsored church and the Vatican, and provide a measure of stability for loyal Catholics on the mainland.

Instead, China watchers have flagged escalating persecution of faithful Catholics and clergy, and Beijing has appeared to announce its own episcopal appointments without previous Roman approval.

While the Diocese of Hong Kong is not believed to be included under the terms of the Vatican-China deal, the appointment process for a new Bishop of Hong Kong took several years and was the subject of tense negotiations between the government and the Vatican.

In December, Bishop Stephen Chow, SJ, was installed as the new leader of the diocese and, in an interview earlier this year he noted that “culture can be subversive,” and touted the importance of the Church’s education mission and work in schools — which have already come under government pressure following the 2020 National Security Law.