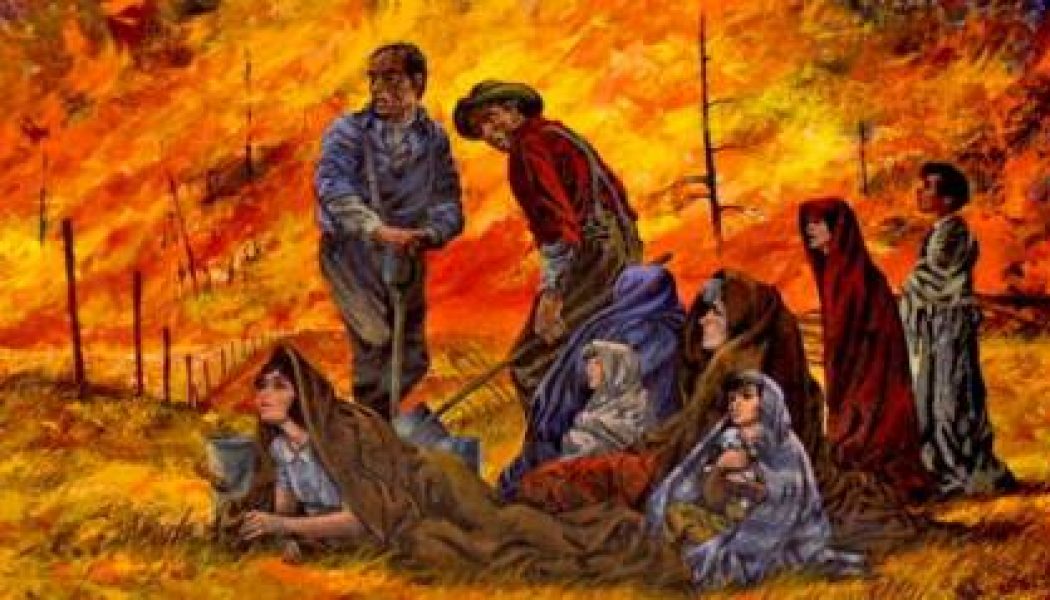 On October 9th, 1859, the first Marian apparition in the United States (since approved by the Catholic Church as “worthy of belief – although not obligatory”) occurred near Green Bay, Wisconsin. Adele Brise, a 28-year-old Belgian immigrant, was walking eleven miles home from Sunday Mass when she saw a beautiful lady with long, wavy, golden hair wearing a crown of stars and clothed in a dazzling white dress with a yellow sash around her waist.

Adele fell to her knees and asked, “In God’s name, who are you and what do you want of me?” The Blessed Virgin Mary replied, “I am the Queen of Heaven, who prays for the conversion of sinners, and I wish you to do the same. You received Holy Communion this morning, and that is well. But you must do more. Make a general confession, and offer Communion for the conversion of sinners. If they do not convert and do penance, my Son will be obliged to punish them. … Gather the children in this wild country and teach them what they should know for salvation…”

Adele was faithful to her mission, teaching the Catholic Faith to the young and praying for sinners’ souls. However, almost exactly twelve years to the day after Mary’s message, Eastern Wisconsin experienced the worst forest fire (both in terms of acres burned and lives lost) in our nation’s history. Flames of the vast Pestigo Fire surrounded the shrine built upon the apparition site, but all who fled to this ground dedicated to Mary survived. Consider: is our present time and culture somehow less deserving of divine punishment than theirs?

Another disaster afflicted our land a century ago. From 1918 to 1920, a deadly flu plagued Europe and the U.S. but wartime censors suppressed news reports from many nations besides the World War One neutral country of Spain. The Spanish Flu, as it came to be called, would go on to kill an estimated 675,000 Americans and at least 50 million people worldwide. This largely-forgotten history has been on my mind as the Coronavirus pneumonia outbreak has spread forth from Wuhan, China. There are strong indications that the dictatorial Chinese government is under-reporting how many of their people are infected or have died from this highly-infectious disease, and new cases are being reported day-by-day around the world. Earlier this month, in a effort to contain the spread of the disease, the Hong Kong government asked its citizens to stay at home and the cardinal of their Catholic diocese has suspended public Masses. Could we experience a deadly pandemic here? The U.S. Centers for Disease Control says “the potential public health threat posed by [Coronavirus] is high.” Therefore, it is wise to be prepared.

I urge prudent preparation on two fronts. First, materially speaking, if an emergency were declared and schools and businesses sent everyone home, could your family be able to shelter at your house away from others for two or three weeks until the crisis passed? What food and water would you have if your electric power went out? Building non-perishable food reserves is easy now while store shelves remain fully stocked. And if no disaster ever comes (as may well be the case) you can simply cycle through these pantry supplies over time; so nothing is lost. The second, more important front in your disaster preparedness is: are you spiritually ready?

If you knew this Lent might possibly be your last, how would that change your spiritual focus? What vices would you cut and which virtues would you grow? How would you commit to prayer and prepare your soul? For many, times of great crisis or the end of their lives arrive unexpectedly and people face them unprepared. As Jesus once observed, “In [the days of Noah] before the flood, people were eating and drinking, marrying and giving in marriage, up to the day that Noah entered the ark. They did not know until the flood came and carried them all away.” Mark’s Gospel recalls one occasion when the Pharisees came forward and began to argue with Jesus, seeking from him a sign from Heaven to test him. Jesus sighed from the depth of his spirit and said, “Why does this generation seek a sign?” The Pharisees had heard Jesus’ teachings and known his mighty works but they still obstinately refused to change. Why do we put off the Lord, refusing to listen and respond, postponing our conversion until it might be too late?

Once, after a tower collapse in Jerusalem ended eighteen lives, Jesus asked, “Do you think they were more guilty than everyone else who lived in Jerusalem? By no means! But I tell you, if you do not repent, you will all perish as they did!” Will the Coronavirus become a devastating American disaster like the Pestigo Fire or the Spanish Flu? Hopefully not. I pray to God it will not be so and ask that you do the same. Yet even if this crisis never comes to your community, why not prepare? Stocking-up your pantry, regularly washing your hands, instilling our Faith into your children, and deepening your own relationship with Jesus Christ are wise decisions you won’t regret.

This entry was posted on February 20, 2020 at 12:20 am and is filed under Blessed Virgin Mary, Jesus Christ, Last Things, Reflection, Repentance, Wisdom. You can follow any responses to this entry through the RSS 2.0 feed. You can leave a response, or trackback from your own site.