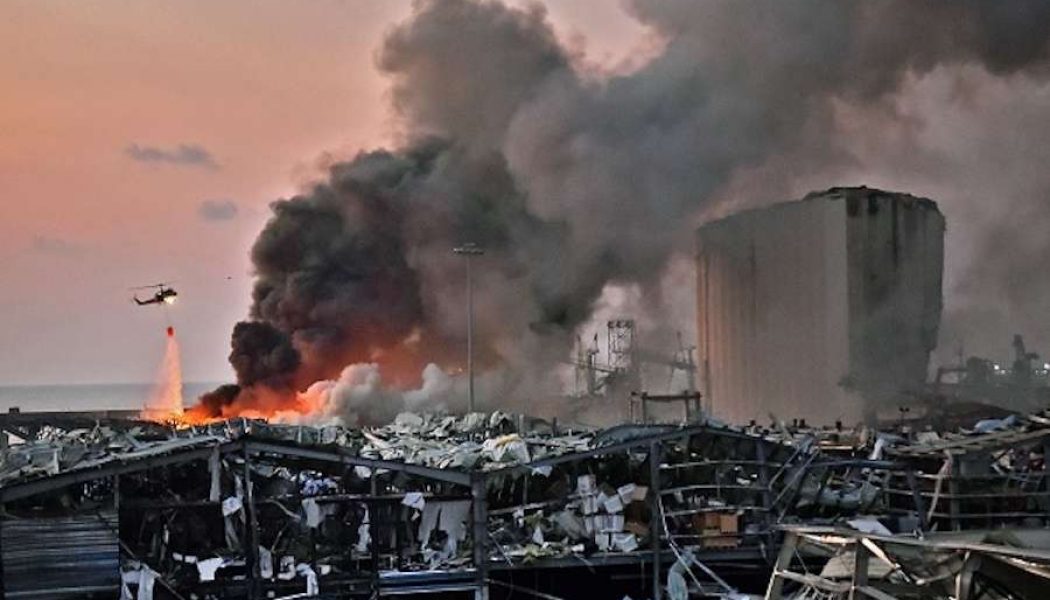 At least one massive explosion rocked the Lebanese capital of Beirut Tuesday afternoon, which ignited fires and destroyed buildings in the city’s port area, caused damage across the city, and has reportedly flooded hospitals with casualties.

Some local news sources are reporting that at least 10 people are dead, and videos have emerged online showing cars overturned in city streets and buildings with shattered windows and crumbled balconies.

The cause of the explosion is not yet clear, but Christian leaders in Lebanon and around the world have called for prayer, and Lebanon’s Prime Minister Hassan Diab announced that Wednesday will be a day of mourning across the country.

Sixty percent of Lebanon’s people are Muslim, evenly split among Sunni and Shia, and nearly 35% of the country’s population is Christian, most of whom are Maronite Catholic Christians. In the wake of the explosion, Christians will likely turn to St. Charbel, Lebanon’s patron saint, who is also revered by many of Lebanon’s Muslims.

Raymond Nader, a Maronite Catholic and a fierce devotee of St. Charbel, told CNA Tuesday he would turn to the saint’s intercession, adding that ”the situation is catastrophic in Beirut.  Hundreds of people killed and wounded and buildings destroyed.”

St. Charbel Makhlouf lived from 1828 to 1898, spending much of his life as a monk and hermit. He is known in Lebanon for the miraculous healings of those who visit his tomb to seek his intercession – both Christians and Muslims.

“St. Charbel has no geographic or confessional limits. Nothing is impossible for [his intercession] and when people ask [for something], he answers,” Fr. Louis Matar, coordinator of the Shrine of St. Charbel in Annaya, Lebanon, told CNA in 2018.

Speaking in Arabic with the help of an interpreter, Matar said the shrine, which encompasses the monastery where the Maronite Catholic priest, monk, and hermit lived for nearly 20 years, receives around 4 million visitors a year, including both Christians and Muslims.

Matar, who is responsible for archiving the thousands of medically-verified healings attributed to the intercession of the Maronite priest-monk, said that many miraculous cures have been obtained by Muslims.

Since 1950, the year the monastery began to formally record the miraculous healings, they have archived more than 29,000 miracles, Matar said. Prior to 1950, miracles were verified only through the witness of a priest. Now, with more advanced medical technology available, alleged miracles require medical documents demonstrating the person’s initial illness and later, their unexplainable good health.

One of the miracles documented by Matar in December 2018, when he spoke to CNA, was that of a 45-year-old Italian woman. Suffering from a neurological disease, she was hospitalized after it was discovered she had tried to commit suicide by consuming acid.

In the hospital, the doctors discovered that the damage to her esophagus and intestines was so extensive, “the last way possible to cure her was believing in God and praying,” Matar commented.

The woman’s parents began to pray, inviting others to pray with them. A religious sister of the Maronite Catholic Church heard about the prayer request and gave them holy oil from St. Charbel’s shrine. After her parents spread the oil on the suffering woman’s stomach, chest, and head, the woman was cured.

This was just one of seven miracles archived in December, Matar said, calling each one “a phenomenon.”

The Shrine of St. Charbel consists of the Monastery of St. Maron, where the saint lived for 19 years with great devotion to prayer, manual labor, and contemplative silence; and the nearby hermitage where he lived a rigorous asceticism and profound union with God for the last 23 years of his life.

At the monastery, pilgrims can visit a church built in 1840, a small museum with artifacts and relics from the saint, and the site of his first grave. St. Charbel’s tomb, since 1952, is located inside a special cave-like chapel built into the property.

Even while he was alive, Charbel’s superiors observed God’s “supernatural power” at work in his life, and even some Muslims knew him as a wonder-worker.

Deeply devoted to God’s Eucharistic presence, he suffered a stroke while celebrating the Divine Liturgy of the Maronite Catholic Church on December 16, 1898, dying on Christmas Eve of that year. He was canonized in 1977 by St. Pope Paul VI.