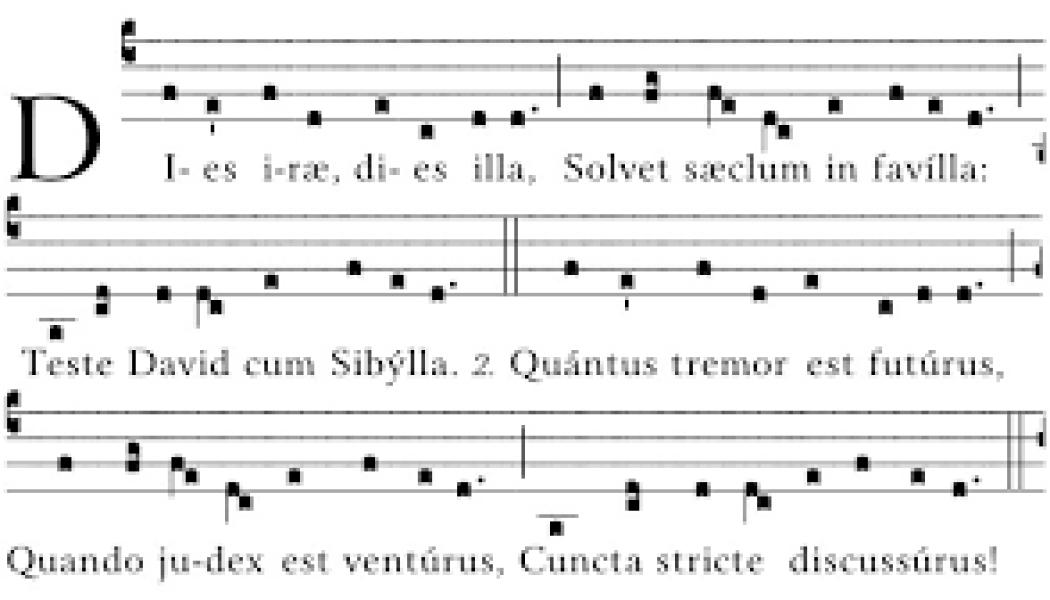 I am certainly not the first one to make note of the fact that the Sequence, Dies Irae, for All Souls’ Day appears to have made a profound and far ranging contribution to American Culture.

From blockbusters like Star Wars to Lion King to It’s a Wonderful Life to The Hobbit to Jurassic Park to Ground Hog Day and to who knows how many other movie sound tracks, the sublimely doleful tune, reminiscent of the last things, has touched untold millions.

Of course, the musical “quotations” or allusions, sometimes subtle sometimes obvious, are only recognizable to those with a passing familiarity of the original; nonetheless the presence of the chant in these movies makes them all the more substantive and powerful.

Now, I am certain there are others who are able to make a solid case for the influence of Gregorian chant in western civilization. Students at conservatories and music schools everywhere are taught the significance of the Solfege Scale and the significance of Gregorian chant in the foundations of the music of western civilization. I am not the one to make this case with the compelling clarity that it deserves.

Nor do I intend to make any attempt to launch a more scholarly treatise manifesting the enormous impact that Gregorian chant had on the great musicians of the Renaissance, like William Byrd, Thomas Tallis and Giovanni Pierluigi da Palestrina. I will not attempt to trace the influence of chant in the music of the Baroque period, in the music of, say, Bach and Mozart. Such an attempt far exceeds the level of my musical literacy. That Gregorian chant is foundational in western music, and is therefore foundational in the consciousness (perhaps subconsciousness) of the western mind, is, nonetheless, indubitable.

The task of demonstrating the profound impact that Gregorian chant has had on civilization is far, far above my power!

But isn’t it interesting how the timeless strains of a melody composed by some anonymous Catholic monk in the thirteenth century is still used to stir the minds and hearts of those in the twenty- first?

I will simply suggest the truth of my thesis based on the first four notes of the Dies Irae, and rely on the compelling case it has made in It’s a Wonderful Life when George Bailey makes his ultimate choice on that bridge!

Or perhaps my point is really about the principles of western civilization. Sometimes enormous things arise out of very small beginnings. Think of the oak! Likewise, think of the relative simplicity of the eight notes of the Solfege Scale (i.e. the Do Re Mi Scale) and the mere four notes that begin the Dies Irae.

Just so, the principles of Christian civilization arise out of relatively few principles: twelve articles of faith and two laws of charity.

Or perhaps we might say that Christian western civilization arises out of the contemplation of the four last things; when we remember death, judgement, heaven or hell. Civilization arises from the “memento mori.”

Catholic civilization is the basis for all civilization and even four simple notes surely inspired by the grace of God are able to give us a glimpse of the transformative power of His grace in our world.