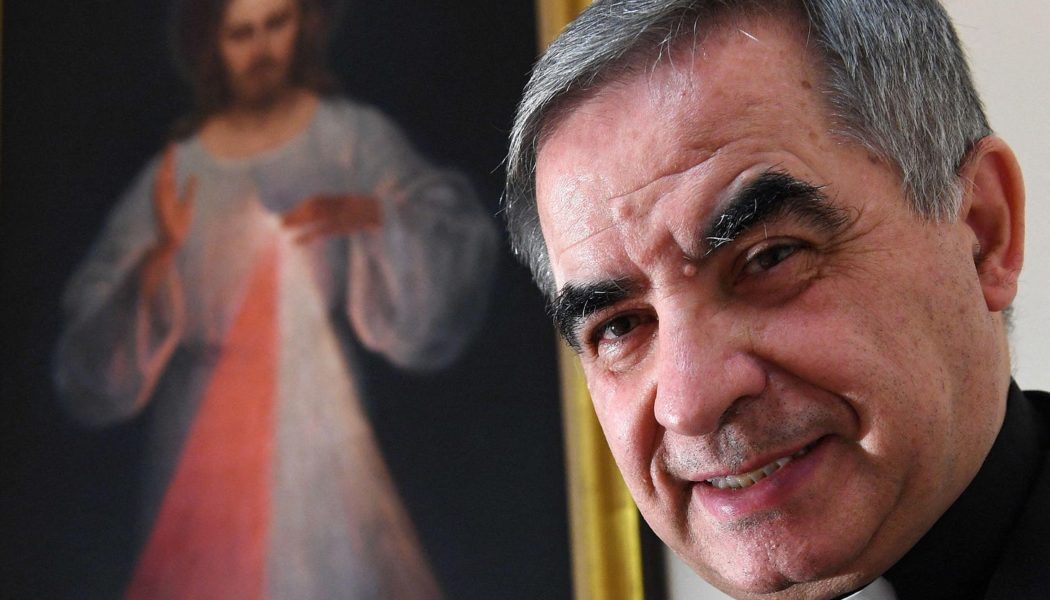 Cardinal Angelo Becciu said Sunday that he has been invited to attend an upcoming consistory for the College of Cardinals, claiming that Pope Francis told him his rights and privileges as a cardinal will be reinstated.

Becciu was sacked from his curial positions in September 2020, and forced to resign his rights as a cardinal, after Vatican prosecutors met with Francis and laid out possible evidence of criminal financial activity by the former papal chief of staff.

“On Saturday the pope telephoned me to tell me that I will be reinstated in my cardinalatial functions and to ask me to participate in a meeting with all the cardinals to be held in the next few days in Rome,” Becciu told the congregation at a Mass he was celebrating in his native Sardinia on Sunday, according to Italian media reports.

“For this reason, next Sunday I will not be able to be present at Mass since I am busy in Rome,” the cardinal reportedly said, adding that he was “very moved by this gesture of the pope,”

“I thank him from my heart and I reconfirm my full communion with him,” Becciu reportedly said.

Becciu’s words were first reported by the local newspaper Uninione Sarda, and shared on Facebook by the cardinal’s brother, Mario Becciu. The Holy See has not yet commented on Becciu’s statement, or clarified the cardinal’s status.

If Becciu’s claim is true, the pope’s decision would mark a dramatic reversal of fortune for the cardinal, who is the former sostituto at the Secretariat of State and was prefect of the Congregation for the Causes of Saints until 2020.

Becciu is currently on trial in Vatican City on charges of embezzlement and abuse of office, conspiracy, and subornation of witnesses. Those charges were announced in July last year, when prosecutors filed a several hundred page indictment against Becciu and nine other former officials or advisors to the Secretariat of State.

The trial is taking place in ordinary Vatican City court; Pope Franics made legal changes in 2021 that stripped cardinals of the right to be tried only by a special tribunal of the Apostolic Signatura.’

Becciu and his family have previously indicated that the cardinal expected to be rehabilitated by Pope Francis before the conclusion of his criminal trial,

In 2021, Pope Francis celebrated a private Holy Thursday Mass in Becciu’s Vatican apartment, a move widely interpreted by media, and by Mario Becciu, as an indication the cardinal was about to be reinstated by the pope. The Vatican subsequently clarified that the visit was a private act of pastoral mercy towards the cardinal, and not a step towards his rehabilitation.

Since then, Becciu has appeared in court several times to answer questions about several of the charges he faces.

On his first appearance before the judges, Becciu insisted he was wholly innocent of all charges and had his “head held high” as his attempted to refute evidence that he used his Vatican office to funnel hundreds of thousands of euros to members of his own family in Sardinia.

When asked about his involvement in controversial Secretariat of State business, including the department’s 200 million euro investment with the Anglo-Italian businessman Raffaele Mincione, which led to the London property scandal, and the alleged use of a “private spy” Cecelia Marogna, Becciu claimed he was prevented from answering by the pontifical secret.

In March, Pope Francis dispensed the cardinal from the pontifical secret, clearing the way for him to answer more questions.

In subsequent court appearances, Becciu told the judges that Francis himself was ultimately responsible for many of the final transactions which led to the trial, and depicted himself as essentially a functionary operating between the pope and his own officials, but with little understanding of what was actually going on in the department he oversaw.

Becciu also blamed Pope Francis personally for the June 2017 sacking of Libero Milone, the Vatican’s first auditor general, who was detained by Becciu and threatened with criminal prosecution if he did not resign, telling the court that Francis personally ordered Becciu to sack Milone.

The cardinal said at the time that Milone had been threatened with prosecution and that Milone “went against all the rules and was spying on the private lives of his superiors and staff, including me.” “If he had not agreed to resign, we would have prosecuted him.”

Milone said that he and his team were targeted by the Secretariat of State because they were uncovering financial misconduct in the department, and had their offices and computers bugged. “We had come across something we shouldn’t have seen,” Milone said.

In court in May, Becciu said that he had not previously discussed Francis’ role in Milone’s ousting out of “love for the pope,”

The Vatican trial stands in recess until September, after several sessions scheduled for July were canceled. When the court last met, chief judge Giuseppe Pignatone noted that prosecutors and defense lawyers had planned to call as many as 200 additional witnesses as the process enters its second year.

Cpanel. As a live chat support agent, you can work from anywhere as long as you have an internet connection. How to wholesale real estate step by step: the complete guide to newbie-friendly wholesaling.