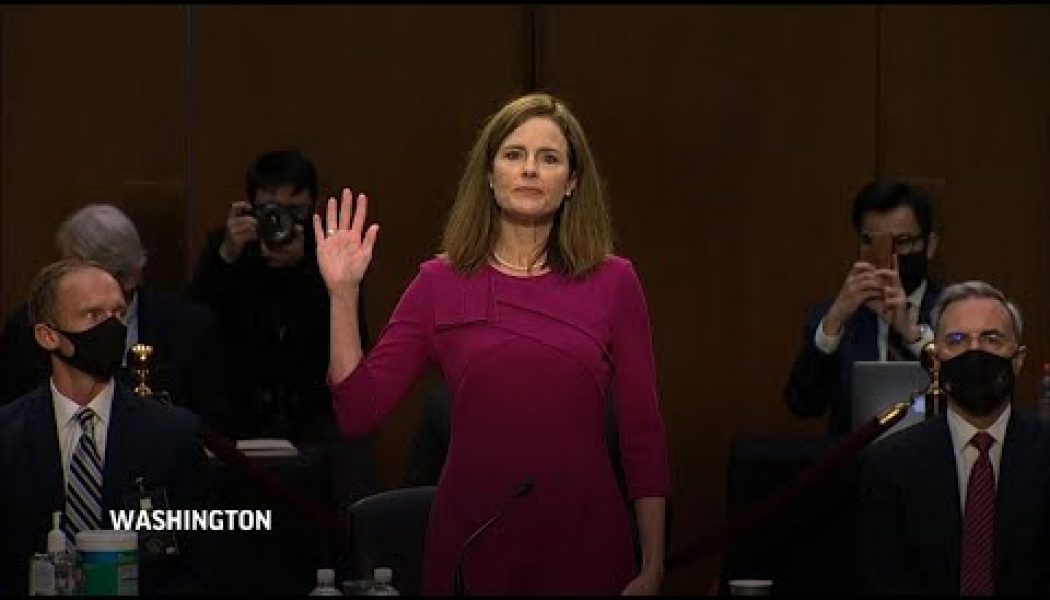 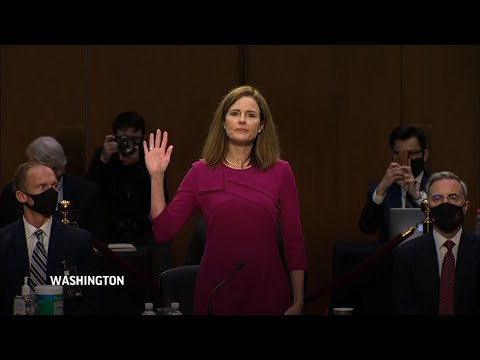 Dear editors at the Associated Press:

Let’s discuss a few issues behind your recent feature that was sent to newspapers everywhere with this headline: “Barrett was trustee at private school with anti-gay policies.”

The key, of course, is “policies” — a vague term that way too many mainstream journalists consistently use in place of the simple word “doctrines.”

Yes, of course, traditional Catholic schools have “policies” that affect students, faculty and staff. However, these policies are almost always attempts to teach and defend the doctrines of the church. It’s significant that the word “doctrine” does not appear anywhere in this long AP piece and the same goes for the word “catechism.” Also, “scripture” is used once — by a progressive Catholic stressing that conservative Catholics are “literalists” when reading the Bible.

Anyone who has covered Catholic education for a decade or two knows what is going on here. Yes, Democrats are furious about Amy Coney Barrett’s arrival on the high court. But this Associated Press story is built on divisions inside the American Catholic church, both on moral theology linked to LGBTQ issues and fights over the goals of Catholic education in colleges, universities, seminaries and private schools such as the ones linked to Barrett and People of Praise.

With that in mind, let’s add two other factors to this case that are ignored (or all but ignored) by AP.

First of all, once upon a time there was a man named St. Pope John Paul II. In 1990, this pope issued a document entitled “Ex Corde Ecclesiae (From the Heart of the Church)” focusing on issues in Catholic education. You could tell that it was a controversial document (a) because it said Catholic doctrines should be taught and defended in Catholic schools, (b) progressive Catholics, speaking through the press, went ballistic and (c) it took almost a decade of fighting for American Catholic church leaders to act (sort of) on the pope’s guidelines.

This fight was primarily about colleges and universities, but the principals in Ex Corde are relevant to fights, these days, about classroom and student-life issues in Catholic schools at all levels. So what was John Paul II saying? Here’s a flashback to an tense moment early in his papacy, as quoted in one of my “On Religion” columns:

The young pope was friendly, but blunt, as he faced the 240 college leaders from across the nation who gathered at Catholic University to hear his thoughts on faith and academic freedom.

“Every university or college is qualified by a specific mode of being,” said Pope John Paul II, who was only 57 on that day in 1979. “Yours is the qualification of being Catholic, of affirming God, his revelation and the Catholic Church as the guardian and interpreter of that revelation. The term ‘Catholic’ will never be a mere label, either added or dropped according to the pressures of varying factors.”

These were — as we would say in the South — “fighting’ words” and the battles continue to this day.

Second, there was this U.S. Supreme Court case called Hosanna-Tabor Evangelical Lutheran Church and School v. Equal Employment Opportunity Commission, et al. at was decided with a highly significant 9-0 vote (in an era of 5-4 votes). To make a long story short, it defended the concept of a “ministerial exception” allowing religious institutions and schools to hire and fire employees based on matters of doctrine. It was an important victory for old-school liberalism on First Amendment issues linked to the free exercise of religious beliefs.

There are hints, in the AP story on Barrett, that someone knew that this case existed — maybe. Meanwhile, in a related case decided (on a 7-2 vote) this past summer, Justice Samuel Alito stressed that the “ministerial exception” also applied to claims of discrimination linked to LGBTQ issues.

“The religious education and formation of students is the very reason for the existence of most private religious schools, and therefore the selection and supervision of the teachers upon whom the schools rely to do this work lie at the core of their mission,” Alito writes. “Judicial review of the way in which religious schools discharge those responsibilities would undermine the independence of religious institutions in a way that the First Amendment does not tolerate.”

In other words, the First Amendment allows religious schools — left and right — to teach and defend the doctrines on which they were founded.

That brings us to the AP feature, which follows the now-common news media pattern in which critics and former members of an organization speak through waves of quotations drawn from interviews and a religious institution is represented by a few quotes from emails. Here’s the overture:

Supreme Court nominee Amy Coney Barrett served for nearly three years on the board of private Christian schools that effectively barred admission to children of same-sex parents and made it plain that openly gay and lesbian teachers weren’t welcome in the classroom.

The policies that discriminated against LGBTQ people and their children were in place for years at Trinity Schools Inc., both before Barrett joined the board in 2015 and during the time she served.

The three schools, in Indiana, Minnesota and Virginia, are affiliated with People of Praise, an insular community rooted in its own interpretation of the Bible, of which Barrett and her husband have been longtime members. At least three of the couple’s seven children have attended the Trinity School at Greenlawn, in South Bend, Indiana.

Nice phrase there, “rooted in its own interpretation of the Bible” — as opposed to centuries of Catholic doctrines and traditions.

Yes, I know that — in the Pope Francis era — there are clashing statements from the pope, producing controversial headlines, related to some issues linked to sexuality and marriage. But taking those quotations seriously would require studying many Pope Francis quotations on LGBTQ issues and, frankly, the AP editors weren’t interested in that (as we will see in a moment).

Back to the story:

The AP spoke with more than two dozen people who attended or worked at Trinity Schools, or former members of People of Praise. They said the community’s teachings have been consistent for decades: Homosexuality is an abomination against God, sex should occur only within marriage and marriage should only be between a man and a woman.

Interviewees told the AP that Trinity’s leadership communicated anti-LGBTQ policies and positions in meetings, one-on-one conversations, enrollment agreements, employment agreements, handbooks and written policies — including those in place when Barrett was an active member of the board.

It would, of course, have helped if AP had backed up that sledgehammer use of the term “abomination” with scriptural references noting the many other sins described in the same way.

However, it is crucial that the story did note that these doctrines (and resulting policies) are stated openly in documents and handbooks that parents, teachers and others have a choice to affirm or not affirm. This is, after all, a private school and private schools are allowed to teach and defend the doctrines on which they were founded (there’s that theme, again).

Thus, the story (to its credit) states:

A 2018-19 enrollment agreement obtained by the AP says “the only proper place for human sexual activity is marriage, where marriage is a legal and committed relationship between one man and one woman.” It goes on to say that activities such as “fornication, pornography, adultery and homosexual acts, and advocating or modeling any of these behaviors” are at odds with the school’s core beliefs.

As I mentioned, it does appear that someone linked to the story knew, or learned, about that 9-0 Hosanna-Tabor decision, along with the follow-up case. Why do I say that? There is this:

Wow. This is immediately followed by:

Scholars said the school’s and organization’s teachings on homosexuality and treatment of LGBTQ people are harsher than those of the mainstream Catholic church. In a documentary released Wednesday, Pope Francis endorsed civil unions for the first time as pope, and said in an interview for the film that, “Homosexual people have the right to be in a family. They are children of God.”

Define “mainstream”? Is that Georgetown University or the Catholic University of America?

This short passage opens a door to complicated discussions of what the pope did or didn’t say, beginning with the fact that Francis was addressing issues of secular laws linked to “civil unions,” as opposed to church teachings about the sacrament of marriage. What else has this pope said about gay marriage, gender identity and other issues linked to church doctrines?

Why should today’s AP bother to cover both sides of a complicated story? Why treat believers on both sides with any sense of respect?

It also would have been interesting to have done hard research into how many Catholic schools in America have chosen to affirm — directly or indirectly — gay marriage, trans students, etc. How have their bishops responded? How about parents?

This AP reference makes it sound like Trinity is a strange, fundamentalist school that is standing alone, far out of the “mainstream” on church doctrine. Then again, you could make a case that many “mainstream” Catholic schools have moved to the doctrinal left, in the context of the pluriform American Catholic church. That’s another story that has been unfolding for decades. Which schools are growing and which schools are in decline?

Let’s wrap this up. Editors at AP framed this story as as a debate between armies of progressive Catholic experts and, well, one representative of the backward, conservative school in question. That looks like this:

“Trinity Schools does not unlawfully discriminate with respect to race, color, gender, national origin, age, disability, or other legally protected classifications under applicable law, with respect to the administration of its programs,” said Jon Balsbaugh, president of Trinity Schools Inc., which runs the three campuses, in an email.

The key to this story is that it is, in large part, about a battle between liberal and orthodox Catholics and this has been going on for decades here in America and elsewhere.

Editors at the Associated Press, it is clear, are only interested in voices on one side of that debate.

I would suggest that someone in the AP hierarchy read “Ex Corde Ecclesiae (From the Heart of the Church)” and also documents linked to that 9-0 Hosanna-Tabor decision at the high court.

One other suggestion: Journalists should pay close attention to how bishops — on the left and right — are responding to these latest Pope Francis quotes, including comments on how they were edited (see this Julia Duin post with some thoughts on that topic).

Stay tuned. As I said, these arguments have been going on for decades.