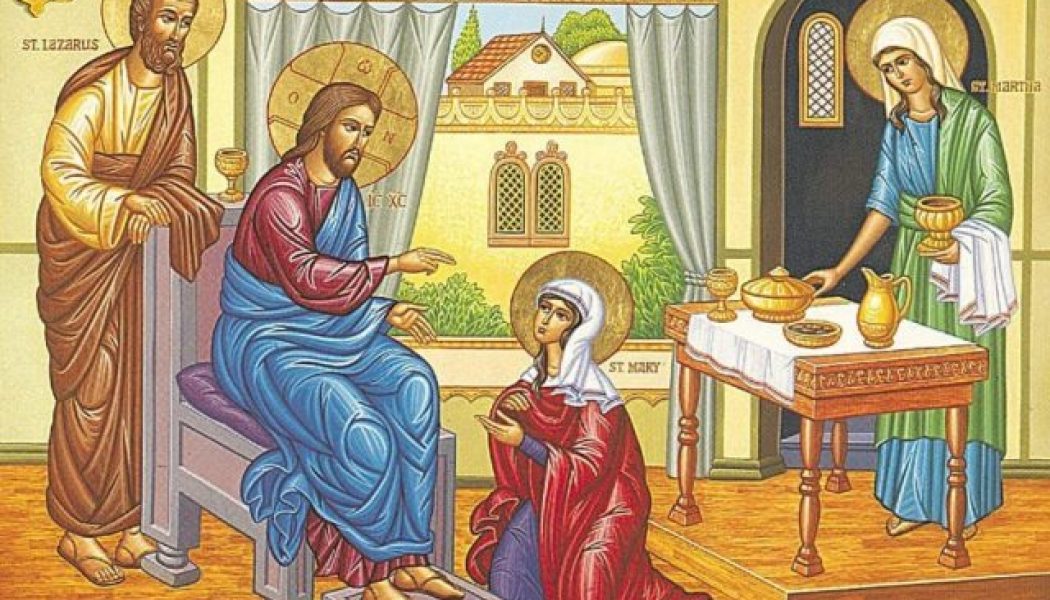 The General Roman Calendar is the international liturgical calendar used in the Latin Church, and it is the basis of the particular calendars used in different countries.

A memorial is a liturgical commemoration ranking below a solemnity and a feast but above an optional memorial.

Given the prominence of the Bethany family in the Gospels—they are mentioned as friends of Jesus in both Luke and John—it may come as a bit of a surprise that they didn’t already have a place on the calendar.

And there’s a reason for that.

The decree announcing the new memorial indicates that the reason the Bethany family didn’t have a common spot on the calendar up to now was due to uncertainty about how three biblical women should be identified:

The traditional uncertainty of the Latin Church about the identity of Mary—the Magdalene to whom Christ appeared after his resurrection, the sister of Martha, the sinner whose sins the Lord had forgiven—which resulted in the inclusion of Martha alone on 29 July in the Roman Calendar, has been resolved in recent studies and times, as attested by the current Roman Martyrology, which also commemorates Mary and Lazarus on that day.

The three women were thus:

In the Latin Catholic Church, there has historically been a question of whether these three figures are actually one person, with various authors holding that they were.

Why Would This Cause a Problem?

The reason this would cause a problem for giving the Bethany family a common slot on the calendar is that Mary Magdalene already had one.

Mary Magdalene is mentioned in all four Gospels as one of the witnesses of Jesus’ resurrection, and her liturgical day is July 22. What’s more, it’s a feast, which outranks a memorial.

So, it would be odd to have a second liturgical day dedicated to the Mary, Martha, and Lazarus, since Mary would be appearing on the calendar twice.

As a result, Martha alone had a day on the liturgical calendar—July 29—though in the current Roman Martyrology (the Latin Church’s official list of saints and martyrs) also lists Mary and Lazarus on that day.

Why has there been a question about the identification of the three women?

Part of the reason is that the sinful woman that Luke mentions wiping Jesus’ feet with her hair is unnamed (Luke 7:36-50).

However, John says that Mary the sister of Martha and Lazarus wiped Jesus’ feet with her hair (John 11:2), and that could mean that they are the same person.

On the other hand, it may not, because in the very next chapter, John tells us the story of Mary wiping Jesus’ feet with her hair (John 12:3), and he does not present her as a sinner. Luke also mentions the woman weeping over Jesus’ feet, but John doesn’t mention Mary doing this.

Also, since Luke does mention Mary the sister of Martha and Lazarus in his Gospel (Luke 10:39), you’d think that he’d mention her by name if she was the sinful woman.

Further, Luke presents the hair wiping incident as occurring at a very different point in Jesus’ ministry. In Luke, it’s early on—before Jesus arrives in Jerusalem for Passion week, while in John, Mary wipes Jesus’ feet with her hair the day before the Triumphal Entry.

That could be because the Evangelists aren’t required to keep events in a strict chronological order, but it also could be that two different women performed similar actions to honor Jesus.

As a result, this matter is still ambiguous. There is evidence that points both ways.

One Mary or Two?

The identity of the sinful woman has not been the key obstacle to giving the Bethany family a spot on the calendar, though. Instead, it’s been the question of whether Mary Magdalene and Mary the sister of Martha and Lazarus are the same person.

There are, after all, multiple women named “Mary” in the New Testament.

In fact, more than one in five Jewish women in first century Palestine were named Mary (see Richard Bauckham’s outstanding book, Jesus and the Eyewitnesses, ch. 4).

With a name that common, people in the first century Jewish community needed ways to tell them apart, and since they didn’t have last names like we do, they needed to use something else.

How They Did It

One of the most common ways of telling one person from another was to use a patronym—that is, to refer to them in connection with their father.

This is why Peter’s birth name is Simon bar-Jona, or “Simon the son of John.” It would distinguish him from other Simons, since most of their fathers wouldn’t also be named John.

But, if you didn’t know someone’s father, you might refer to them by a different relative—say, a brother. Thus, Peter’s brother Andrew can be referred to as “Andrew the brother of Simon” (Mark 1:16).

In the case of women, you might refer to them by the names of their husbands. Thus, Luke refers to “Joanna the wife of Chuza” (Luke 8:3) and John refers to “Mary the wife of Clopas” (John 19:25).

But what do you do if you aren’t acquainted with a person’s relatives?

In that case, they were probably from somewhere else—since you’d know everybody in your own village—and so you could use their place of origin as a substitute.

This gives us the information we need to figure out the puzzle.

Mary the Sister of Martha and Lazarus

They thus follow the standard naming conventions of the time.

Modern scholars often refer to them as “the Bethany family,” because that’s where they lived.

Bethany was a small village just outside Jerusalem, on the southeastern slope of the Mount of Olives.

And this was their stable place of residence. In fact, John introduces Lazarus by referring to him as “Lazarus of Bethany” and follows up by saying Bethany was “the village of Mary and her sister Martha” (John 11:1).

So, they were all identified with Bethany in Judaea. If you were from somewhere else and knew only one of the siblings, you would have used “of Bethany” as their identifier.

In fact, modern scholars often refer to Mary as “Mary of Bethany” to avoid the lengthier “Mary the sister of Martha and Lazarus.”

This means that, when Luke and John refer to “Mary Magdalene,” they are referring to a different person.

They already have a way of referring to the Mary who was related to Martha and Lazarus.

They’ve already introduced her to their audience using the sibling-identifier, and so they would be misleading their audience if they suddenly switched the identifier to something else and didn’t mention to their readers that they’re still talking about the same person.

In this case, the identifier—“Magdalene”—is a place name. “Mary Magdalene” means “Mary of Magdala.”

Magdala was a major fishing port on the Sea of Galilee, which is—of course, located up north in Galilee, way far away from Bethany down by Jerusalem.

That tells us several things:

Putting It All Together

And so, the puzzle is resolved. Despite earlier identifications of Mary Magdalene with Mary of Bethany, they are really two different people.

This has become clear—as the Congregation for Divine Worship notes—“in recent studies” that have carefully examined the way first century Jewish names worked.