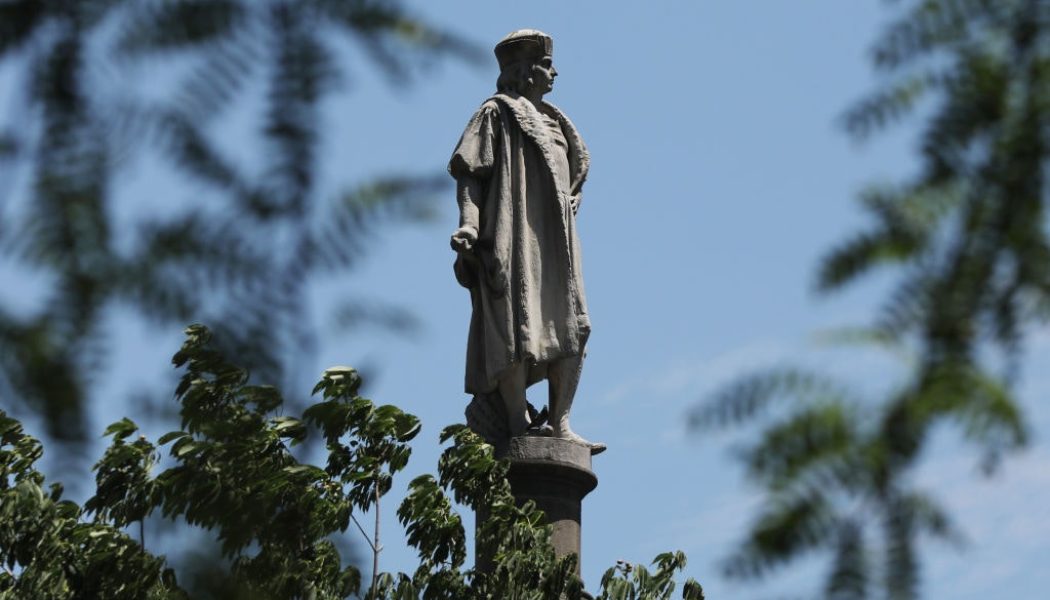 The bad news for proud Italian Americans is that Columbus Day looks about as sunk as the Santa Maria. It’s been 129 years since the first major national celebration of Christopher Columbus’ arrival in the New World, and the holiday for the most famous Genoese in history has never been in lower standing in American culture.

Yes, there’s a parade scheduled in New York today—Joe Piscopo was even on hand for the ceremonial cutting of the first meatball. But in the city and the dwindling number of places where holiday is still publicly celebrated, there will be protests and condemnations. Native American groups seem to have mostly won their decades-long battle to pry Columbus from the national pantheon.

But there is some good news in all this for proud Italian Americans, too. Those looking to tear down Columbus, both figuratively and literally, often talk about “white supremacy” and “white privilege.” But in 1892, when the first real national holiday honoring Columbus was held, no one would have thought of Italian Americans as privileged—and many wouldn’t have even considered them “white.” Indeed, that first holiday, which celebrated the unveiling of the 76-foot-tall monument to Columbus next to New York’s Central Park, was in part driven by an effort to fight back against a growing, sometimes deadly racism directed at Italian immigrants and their families.

There wasn’t much to connect Columbus and the new Italian immigrants pouring into to United States around the time of the 400th anniversary of his discovery. But Columbus, or the idea of Columbus, had enormous appeal in the myth-making that was a necessary step in Italian-American assimilation. Intrepid Columbus rejected the backward ways of the Old World to find his fortune across the Atlantic. Their connection to Columbus also gave Italian Americans a piece of the Founding, even if he never came to these shores. Columbus could be both a source of cultural pride and identity for the group, but also a rebuttal for the scorn and sometimes much worse that was heaped on them by a society dominated by Protestants of Northern European heritage.

Anti-Italian bigotry was prevalent across the country. Here’s a snapshot from a 2019 New York Times article on the subject: “As the historian Jennifer Guglielmo writes, the newcomers encountered waves of books, magazines and newspapers that ‘bombarded Americans with images of Italians as racially suspect.’ They were sometimes shut out of schools, movie houses and labor unions, or consigned to church pews set aside for black people. They were described in the press as ‘swarthy,’ ‘kinky haired’ members of a criminal race and derided in the streets with epithets like ‘dago,’ ‘guinea’ — a term of derision applied to enslaved Africans and their descendants — and more familiarly racist insults like ‘white [n—-r]’ and ‘[n—-r] wop.’”

This makes more tragic the ways in which some Italian Americans later embraced anti-black racism—no doubt in part to try to solidify their status inside the dominant culture. But 130 years ago, Italian immigrants and blacks often made common cause, especially in New Orleans.

Louisiana sugar plantation owners had become reliant on Italian immigrant workers—mostly Sicilians—in the decades after emancipation. But as it became clear to white New Orleanians that these new arrivals were large in number, insular, and comfortable living and working with blacks, attitudes started to shift. By the fall of 1890, the same anxiety about “swarthy” Sicilians that had been present in the industrial north from the 1870s had come to New Orleans. When the city’s popular police chief was gunned down in the street and reportedly identified his assailants with an epithet for Italians, there was mass outrage. The shocking crime was blamed on Italians in general, and the Sicilian mafia specifically. Authorities rounded up 19 Italians on thin pretenses and charged them with killing the chief. The following March, an all-white jury picked to include no Italian Americans, failed to convict any of the first nine defendants to stand trial. The next morning, a well-organized lynch mob arrived at the city jail.

The mob killed 11 of the defendants, including one man who was shot 42 times. But the press coverage near and far was favorable. As the Associated Press put it: “It was not an unruly midnight mob. It was simply a sullen determined body of citizens who took into their own hands what justice had ignominiously failed to do.” While white, elite America was content with the result, it created a diplomatic nightmare for then-President Benjamin Harrison. Italy was furious about the incident but he did not want to appear like he was knuckling under to foreign demands. And he was also about to begin his rematch contest against the man he defeated in 1888, former President Grover Cleveland. Both candidates would be courting Italian-American voters, who were becoming increasingly important in many swing states—Italian Americans like the businessmen who donated most of the money to build the statue in New York’s Columbus Circle in time for the 400th anniversary. Harrison needed to act to show he was not bigoted against Italians and a national holiday celebrating the great explorer was within his power.

The first ever national Columbus Day holiday took place on Oct. 21, 1892, less than three weeks before Election Day.  It wasn’t enough to save Harrison, but it was probably worth some votes. Most of all, it was evidence of the growing clout of Italian Americans. The president of the United States had to listen to their outrage over the murders in New Orleans. It might not have been justice, but it was a cause for hope.

Just as the removal of Columbus monuments is now heralded by some as a triumph for oppressed peoples, the erection of those statues once meant the same thing. If being denounced for cultural oppression can be thought of as a kind of perverse status symbol of the 2020s, then it is surely proof of how far Italian Americans have come. We can hope, also, that it points to the cultural churn that will renew America and take today’s immigrant groups to “privileged” status as it did for Italians.

Chris Stirewalt is a contributing editor for The Dispatch.