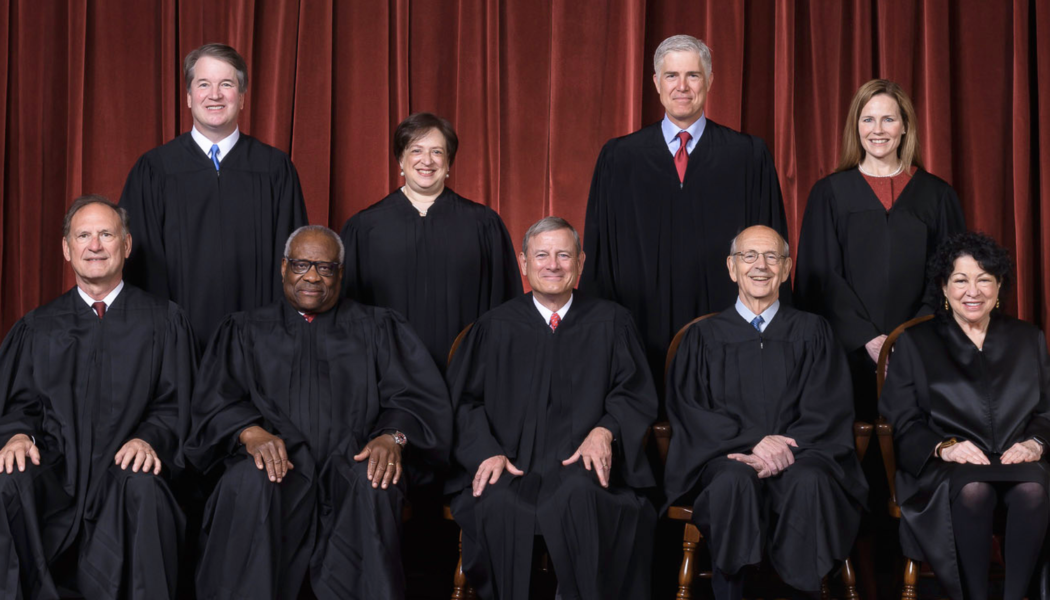 A long time ago, in Internet years, I got tired of trying to define “liberal” and “conservative” during discussions of Catholic life.

Truth is, the teachings of ancient Christianity (I am Eastern Orthodox) don’t fit neatly into the templates of American politics. If you believe, for example, that human life begins at conception and continues through natural death the you are going to be frustrated reading the Republican and Democratic party platforms.

At one point, I started using this term — pro-Catechism Catholics. I soon heard from readers who were upset that I was linking Catholic identity with the idea that Catholics were supposed to believe and even attempt to practice the teachings of the Roman Catholic Church.

This brings me to a new Associated Press story with a very familiar, in recent years, theme. The headline: “Anti-Roe justices a part of Catholicism’s conservative wing.” Here is the overture, which includes — #SHOCKING — a reference to the Catechism of the Catholic Church.

The Supreme Court overturned Roe v. Wade at a time when it has an unprecedented Catholic supermajority.

That’s not a coincidence. Nor is it the whole story.

The justices who voted to overturn Roe have been shaped by a church whose catechism affirms “the moral evil of every procured abortion” and whose U.S. bishops have declared opposition to abortion their “preeminent priority” in public policy.

But that alone doesn’t explain the justices’ votes.

U.S. Catholics as a whole are far more ambivalent on abortion than their church leaders, with more than half believing it should be legal in all or most circumstances, according to the Pew Research Center.

The problem, you see, is that there are justices who appear to embrace the Catechism, on issues linked to the Sexual Revolution, of course. They are clashing with generic “U.S. Catholics,” who are not defined, as usual, in terms of Mass attendance or other references to belief and practice (such as choosing to go to Confession).

What we have here is yet another clash between American Catholics and dangerous Catholics. This appears to have something to do with doctrines that, in reality, have become an “ideology.” Here is one key passage:

But the justices in the Dobbs majority aren’t simply cradle Catholics. Several have ties to intellectual and social currents within Catholicism that, for all their differences, share a doctrinal conservatism and strong opposition to abortion.

… (R)eligious identity has mattered less of late than ideology, which is why conservative evangelicals have cheered on the Republican-nominated Catholics, said Nomi Stolzenberg, a University of Southern California Law School professor focusing on law and religion.

In other words, evangelical Protestants tend to like Catholics who embrace ancient teachings on subject such as abortion, while they are less enthusiastic about evolving Catholic statements about, let’s say, the death penalty (meanwhile, I am opposed to both).

I think it’s important, when looking at this through a journalism lens, to note that “doctrine” is a term that can include religious beliefs, as well as political beliefs. Typical online definitions include:

Something taught as the principles or creed of a religion, political party, etc.; tenet or tenets; belief; dogma.

Doctrine is defined as a principle or group of principles which are taught by a religion or political party.

“Ideology,” on the other hand, is almost always defined in political or cultural terms. For example:

… a system of ideas and ideals, especially one which forms the basis of economic or political theory and policy. “the ideology of democracy”

… a form of social or political philosophy in which practical elements are as prominent as theoretical ones. It is a system of ideas that aspires both to explain the world and to change it.

The big question, for me, is whether it is helpful — accurate, even — to use the word “ideology” in news reports when the goal, as appears to be the case here, is to argue that beliefs in a doctrinal catechism are shaping the work of certain Catholics.

Is the point, in this case, that the identities of Biden and Pelosi are rooted in an “ideology” that rejects the teachings of the Catholic faith? I cannot imagine a mainstream news organization saying that.

Back to the news report, which appears to be based on interviews with critics of the dangerous Catholics, with little or no input from thinkers sympathetic to them.

All six were raised Catholic.

Most went to some combination of Catholic high schools, colleges or graduate schools. The one exception, Dobbs author Alito, has fondly described growing up in a home where “church and the family” were preeminent. Five of the six justices still identify as Catholic, while Gorsuch has attended an Episcopal church more recently.

In some ways, Gorsuch is a man of mystery who, for example, no longer worships in a Catholic pew. However, it is still possible for him to be the wrong kind of Catholic. How? Once again, this appears to have something to with doctrines approved by bad political groups.

Gorsuch, who like several in the Dobbs majority has appeared at multiple Federalist Society events, studied at Oxford University with Catholic legal philosopher John Finnis.

Finnis is a proponent of “natural law,” described in the Catholic catechism as “the original moral sense which enables man to discern by reason the good and the evil.” Gorsuch himself applied that principle in a book opposing assisted suicide.

“It may be the case that Gorsuch is no longer a practicing Catholic — we don’t know,” Stolzenberg said. “What we do know is that his legal philosophy is shaped by the conservative Catholic philosophy of natural law.”

Now, how did natural law affect Bostock? That would be an interesting question to ask a few doctrinally conservative Catholic thinkers. This question might yield information that makes this story even more complicated, something more complicated than “bad Catholics are ideologs who oppose abortion.

Once again, it is hard to jam Catholic doctrine into today’s political templates.

FIRST IMAGE: Official 2021 portrait of Supreme Court justices, by photographer Fred Schilling and posted in the online photo collection of the Supreme Court of the United States.