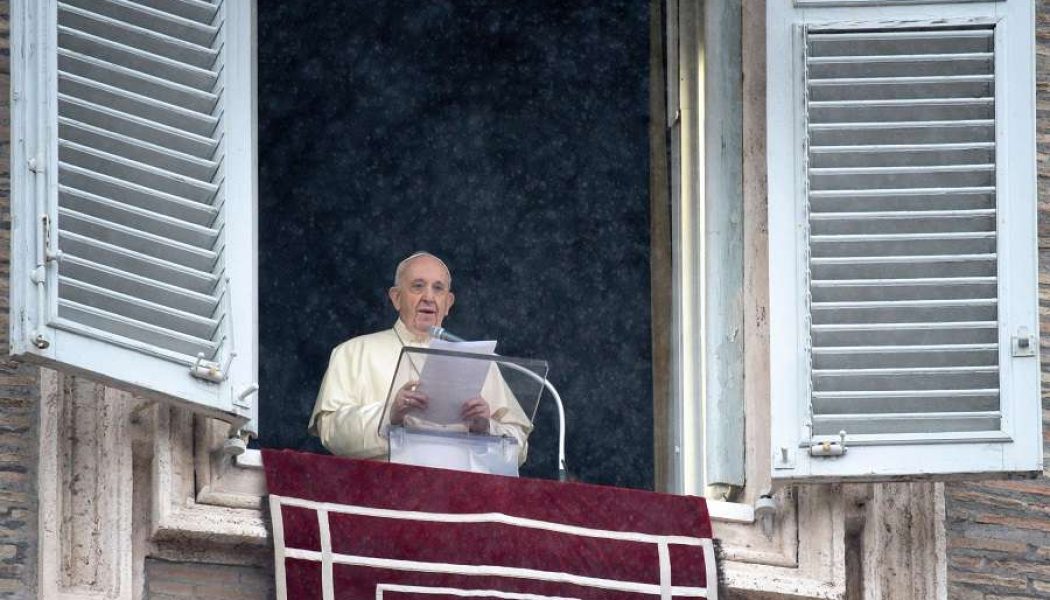 “These days I am following with great concern the developments of the situation that has arisen in Myanmar,” the pope said Feb. 7, using the country’s official name. Burma is “a country that, since the time of my apostolic visit in 2017, I carry in my heart with much affection.”

Francis held a moment of silent prayer for Burma during his Sunday Angelus address. He expressed “my spiritual closeness, my prayers, and my solidarity” with the people of that country.

For seven weeks the Angelus was held via livestream only from inside the Vatican’s Apostolic Palace due to pandemic restrictions. But Sunday the pope returned to leading the traditional Marian prayer from a window overlooking St. Peter’s Square.

“I pray that those who have responsibility in the country will place themselves with sincere willingness at the service of the common good, promoting social justice and national stability, for a harmonious coexistence,” Pope Francis said.

Tens of thousands of people in Burma have taken to the streets this week to protest for the release of Aung San Suu Kyi, the country’s elected civilian leader.

She was detained along with Burma’s President Win Myint and other members of the National League for Democracy (NLD) party when the military seized power on Feb. 1, alleging fraud during last November’s elections, which the NLD won by a landslide.

In his Angelus message Feb. 7, Pope Francis recalled that, in the Gospels, Jesus healed people suffering in body and soul, and emphasized the Church’s need to carry on this mission of healing today.

“It is a predilection of Jesus to draw close to people who suffer both in body and in spirit. It is the predilection of the Father, which he incarnates and manifests with works and words,” the pope said.

He noted that the disciples were not only witnesses to Jesus’ healings, but that Jesus drew them into his mission, giving them “the power to heal the sick and cast out demons.”

“This mission is to bring God’s tenderness to suffering humanity,” Francis said, adding that the coronavirus pandemic “makes this message, this essential mission of the Church, particularly relevant.”

Pope Francis prayed: “May the Holy Virgin help us to allow ourselves to be healed by Jesus — we always need it, all of us — in order to be able in turn to be witnesses of God’s healing tenderness.”