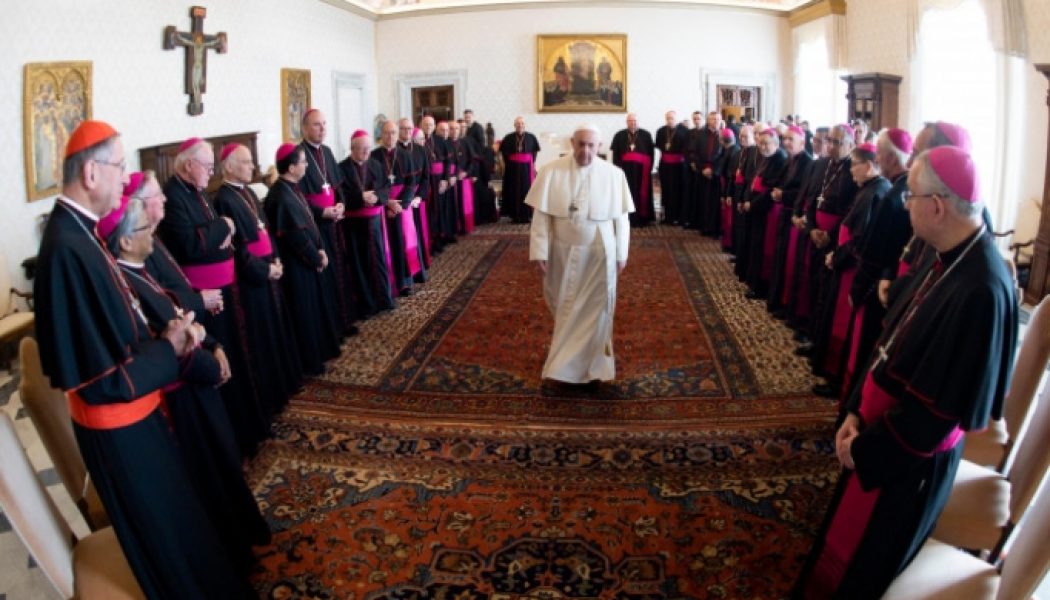 Pope Francis received in a private audience at the Vatican members of the United States Conference of Catholic Bishops’ Region XIII for their “ad Limina Apostolorum” visit on Jan. 27. 2020. (Vatican Media)

COMMENTARY: It is extremely rare to find anyone who emerges from an audience with the Holy Father without a highly favorable impression and without thinking that the Holy Father shares his position.

The U.S. bishops recently concluded their ad limina visits to Rome, in which each of 15 groups of bishops spent several hours in an extended conversation with Pope Francis. Those colloquies got superlative reviews from one and all, with many bishops marveling at how frank, engaged, generous and wise the Holy Father was.

For a pope billed as the “great reformer” who is looking to shake things up and disrupt ossified habits, it is a dog-that-didn’t-bark story. There are apparently no disagreeable meetings with Pope Francis, or even disagreements to be had — at least according to those who are fortunate to meet with him in person.

Auxiliary Bishop Robert Barron of Los Angeles wrote a very appreciative column about the meeting Pope Francis held with the bishops of California, Nevada and Hawaii. As you can imagine from the evangelizing bishop, he had noted over the years that the Holy Father spoke negatively about “proselytism” rather frequently.

“I will confess that I have often wondered at some of Francis’ rhetoric here and have longed for something like his definition of the term,” Bishop Barron wrote. He continues:

The Holy Father clarified that he, of course, advocates the spreading of the faith, but he is opposed to an aggressive, divisive, numbers-oriented approach to the task. Evangelization, he joked, is not like getting people to join your football club! As he often has in the past, he emphasized with us the centrality of personal witness to the joy of living a life of faith. Whatever teaching we do, he said, must take place within the context of that way of life. In this, of course, he was simply echoing Pope Paul VI, who said that people today listen to teachers precisely in the measure that those teachers are also witnesses. I was particularly gratified to hear him on this point, for there have been some in the commentariat who have suggested that engaging in apologetics or theological clarification is tantamount to “proselytizing.” Not according to Pope Francis.

So it seems that Pope Francis has the same understanding of evangelization that Bishop Barron does, at least when Bishop Barron is in the room.

At the Feb. 10 meeting of Pope Francis with the bishops of Arizona, Colorado, New Mexico, Utah, and Wyoming, the subject of Jesuit Father James Martin was discussed.

In September 2019, Archbishop Charles Chaput of Philadelphia had expressed some caution about ambiguities in the teaching of Father Martin in relation to homosexuality. That same month, Father Martin was granted a private audience with Pope Francis, which was highly publicized as a sign of papal favor for his work — and an implicit rejection of Archbishop Chaput’s cautions.

The Jesuit America magazine — where Father Martin writes — said that the audience was a “highly significant public statement of support and encouragement.” Father Martin himself wrote that it was a “sign of the Holy Father’s care for LGBT people.”

Catholic News Agency reported Feb. 21 that two bishops — unnamed sources — at the ad limina meeting said that Pope Francis was upset at how the audience with Father Martin was manipulated in the media. That set off a minor controversy. Archbishop John Wester of Santa Fe, New Mexico, and Bishop Steven Biegler of Cheyenne, Wyoming, confirmed that Father Martin had been discussed but that the Holy Father was not critical. Bishop Wester wrote in the National Catholic Reporter that the Holy Father was not “angry, upset or annoyed” as the two unnamed sources had suggested.

Archbishop Samuel Aquila told CNA that the Holy Father was “frustrated” with how the Father Martin meeting was interpreted and framed.

So what did the Holy Father say? What does he think?

Archbishop Aquila accurately summarized the situation: “It is reasonable that some remarks from the Holy Father would have been interpreted in different ways by different bishops.”

Indeed, regarding the Father Martin meeting, everyone heard what they wished to hear — including Father Martin himself back in September.

It’s a longstanding pattern. Even Cardinal Raymond Burke, banished to be a “cardinal without portfolio” reports that the Holy Father does not “regard him as an enemy.”

“I don’t think so,” Cardinal Burke told The New York Times, which asked him precisely about that. “He’s never said that to me. I don’t meet him frequently, but in the encounters I’ve had he’s never reprimanded me or accused me of having inimical thoughts or attitudes toward him.”

Other cardinals thought to be at odds with Pope Francis likewise report cordial, supportive encounters. Cardinal Robert Sarah has said that the Holy Father wishes him to keep advancing the liturgical directions of Benedict XVI. Cardinal Joseph Zen of Hong Kong, the most vociferous critics of the Holy See’s China policy, says that Pope Francis always receives him with warmth and kindness and implies that Pope Francis does not really support what his diplomats are doing.

Cardinal George Pell, while prefect of the economy, was quite free in sharing that Pope Francis received him regularly and backed him up on all important questions. Nevertheless, the Holy Father undercut Cardinal Pell’s department by transferring authority to other Vatican departments and cancelling a planned audit. Cardinal Pell found out about those decisions not in a contentious private audience — those apparently do not take place — but from other sources as a fait accompli.

Perhaps the most extraordinary example relates the “synodal process” that the Church in Germany has launched in order to modify some Church teachings that a majority of the German bishops no longer wish to teach. Last June, Pope Francis wrote in his own name to Catholics in Germany asking them not to proceed as they had planned. Later in the summer, Cardinal Marc Ouellet, prefect of the Congregation of Bishops, followed with a direct order to stop, including the Holy See’s judgment that the process was canonically invalid. There was no doubt that Cardinal Ouellet, who meets with the Holy Father every week, was confident that he was proceeding according to papal wishes.

Not so fast. Cardinal Reinhard Marx, then the president of the German bishops’ conference and a member of the Council of Cardinals, had an audience with Pope Francis to discuss the matter. Cardinal Marx emerged saying that no matter what the Holy Father and Vatican offices had said publicly, everything was set to proceed. Apparently both Cardinal Ouellet and Cardinal Marx heard mutually contradictory things on the same issue.

The ad limina audiences went splendidly. How could they not, given that everyone emerges having heard what he wished?