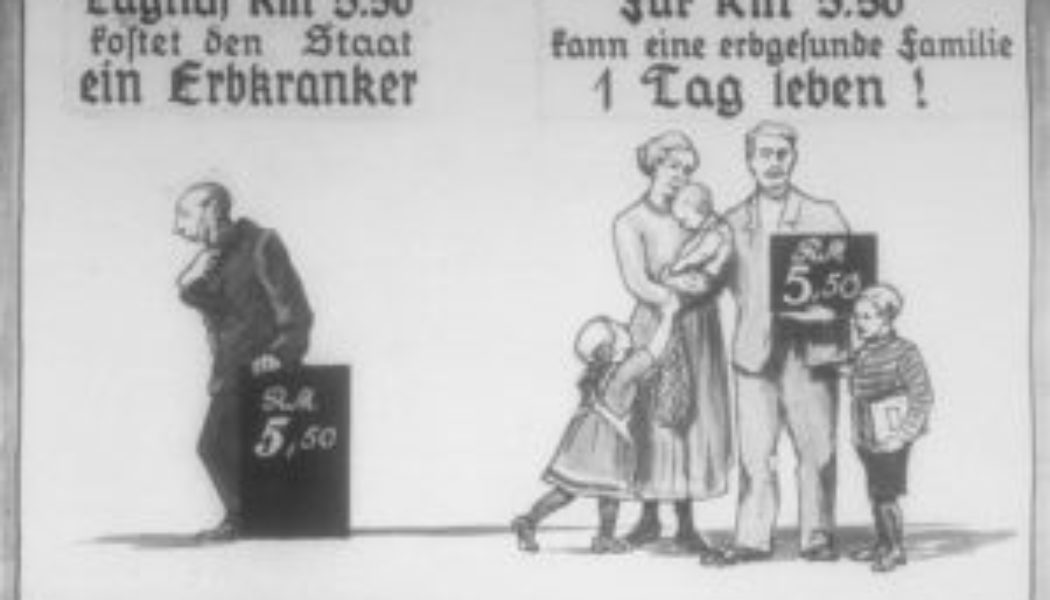 This is a naked commercial, but the product is worthwhile.  If you haven’t yet seen the Netflix short film Forgive Us Our Trespasses, released on February 17, find a way to do so soon.  Barely fourteen minutes long, it feels more like the trailer for a feature movie than a film in its own right.  Nor is it a work of cinematic genius. The film’s writing, direction, and production values are all very simple; almost primitive.  And yet, as one reviewer wrote, it’s packed with “the notes of tension, dramatic action, and release that would usually embody a film with a much wider scope.”  It succeeds as “grand filmmaking on a small scale.”  The reason why is memorable.

Over the past 70 years, dozens of films have dealt with the tragedy of the Holocaust.  And rightly so.  But few have examined the program that set the precedent for the Final Solution and perfected its techniques.  Between 1939 and 1945, the Third Reich’s Aktion T4 campaign murdered 300,000 mentally and physically disabled persons through involuntary euthanasia.  The killings were expertly portrayed in state propaganda as “merciful” for the victims, economically necessary for the nation, and genetically beneficial for the German people.

Forgive Us Our Trespasses tells a very different story: the story of a mother who sacrifices her own life to help her disabled son escape a campaign of clinically organized inhumanity.

How could the most cultured and, at least nominally, Christian nation in Europe embark on such an effort?  It’s tempting to explain Aktion T4 as the creature of Nazi ideology.  But that would be only partly true.  Much of the German medical establishment had “followed the science” and accepted the value of forced sterilization and euthanasia, voluntary and otherwise, years before Adolf Hitler took power.  Doctors and scientists, not SS thugs, first embraced the idea.  The Reich simply exploited their implicit, and at times quite vigorous, support.  Medical personnel faked thousands of death certificates to disguise Aktion T4 murders.  And many of the same doctors escaped postwar prosecution.

At first, the killings involved individual lethal injections.  But this proved time-consuming and hopelessly disproportionate to the scope of the disability “problem.”  The program progressed to sealed mobile vans that could kill dozens of the defective and unwanted at a time, through piped-in carbon monoxide.  At places like the Hadamar psychiatric asylum, victims – often described by medical staff as “human husks” – were gassed en masse in a cellar disguised as a shower room.

In his brilliant, moving, and profoundly disturbing history of Aktion T4, Death and Deliverance, the British historian Michael Burleigh wrote that the disabled were undressed, weighed, and examined by a doctor who selected a fictional “cause of death” from a list of 61 factors.  Then,

patients descended a dozen or steps in batches of sixty at a time, and were then shut into the gas chamber.  A doctor stationed in the alcove outside turned on the valve, and gas streamed in through [a] pipe. . . .[F]ar from being a “gentle death,” the victims experienced extreme terror, as well as the symptoms of carbon monoxide poisoning.  After an hour, all was quiet.

A team of “disinfectors” would then move in to disentangle the corpses.  “Those who had been marked beforehand as being of special scientific interest,” noted Burleigh, were “separated out and taken to a nearby autopsy room. Their brains would go to the university clinics in Frankfurt or Würzburg.”  The dead had their gold teeth extracted, and the bodies were then burned in crematoria.  Ashes were scattered.  Bones were crushed in a mill.

The Holocaust simply mirrored this procedure on a far more massive scale with three innovations:  bigger showers; bigger ovens; and Zyklon B gas.

Confidential opinion surveys conducted by the Reich at the time found an uneasy and deeply divided German public.  The more actively religious the person, the more likely he or she was to oppose Aktion T4.  But many ordinary citizens supported the euthanasia campaign, so long as it was presented as “voluntary” on the part of adult victims, or in the case of children, their parents.

Reich propaganda took great care in softening perceptions of the campaign, framing the euthanasia program as sympathetically as possible.  This included remarkably skillful film melodramas like I Accuse, a movie entirely devoid of vulgar Nazi cant.

The plot of I Accuse involves an attractive, faithful married couple.  The wife, terminally ill, begs her husband to end her suffering.  Moved by love and her insistent appeals, he euthanizes her and is promptly dragged into court as a murderer.  But the husband, unrepentant, rivets the courtroom with words that might sound familiar:

Here I stand, the accused, and now I accuse.  I accuse the proponents of outmoded beliefs and antiquated laws.  This is not just about myself, but about the hundreds of thousands of those who suffer without hope, whose lives we unnaturally prolong, and whose suffering we unnaturally increase. . .and it is about those millions of healthy people, who cannot be protected against illness because everything that is needed to do so has to be employed keeping beings alive whose death would be a deliverance for them and liberation from a burden for the rest of humanity. . . .and now, Gentlemen Judges and Jurors, please deliver your verdict!

Many Catholic and Lutheran clergy resisted the euthanasia program in whatever way they could.  The most forceful such voice was Blessed Clemens August Graf von Galen, bishop of Münster.  But too many were silent.  Religiously-run homes for the disabled typically caved in to regime pressure and handed over their patients for “treatment.”

So. . .what’s the point of all this remembering?  Just this:  Here in America, such things could never occur.  Physician-assisted suicide?  Sixty million abortions?  Selling unborn baby parts?  Fetal tissue experiments?  Catholic public officials who ignore or allow such things?  It can’t happen here.

Or maybe we have our own trespasses that need to be forgiven.

If you are interested in knowing more about all this, consider watching the award-winning (and harrowing) documentary, also written by Michael Burleigh, Selling Murder: The Killing Films of the Third Reich, available on YouTube.

*Image: Nazi propaganda against the disabled [U.S. Holocaust Memorial Museum, Washington, D.C. (courtesy of Roland Klemig)]. The “argument”in the poster is that it costs as much to care for one hereditary imbecile as to support a healthy family.