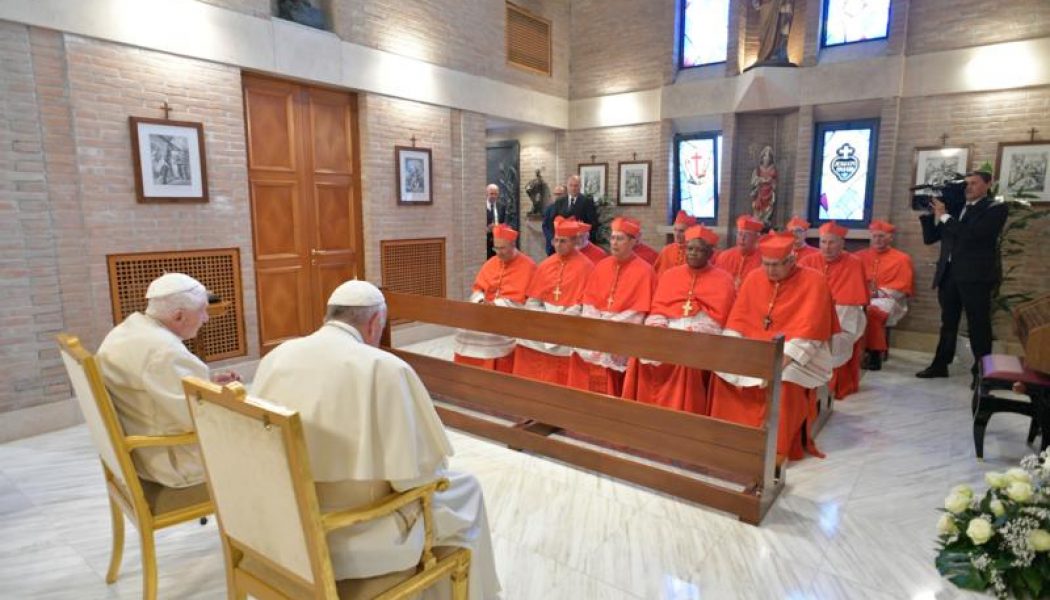 If you were HBO, you couldn’t ask for better publicity. Just as their television series “The New Pope” presents the crisis rising between the fictional Pope John Paul III and his predecessor Benedict XIII, news arises of a possible “conflict” between Pope Francis and the pope emeritus, Benedict XVI.

On Sunday, it was revealed that Benedict had co-authored a short book with Guinean Cardinal Robert Sarah strongly supporting celibacy in the Church. Sarah heads the Vatican’s office on liturgy and is recognized as one of the most conservative of Francis’s department chiefs.

The short book, called Des Profoundeurs De Nos Couers [“From the Depths of Our Hearts”], consists of a chapter by each of the co-authors, as well as a jointly written introduction and conclusion.

The book was written in the wake of a suggestion from last October’s Amazon synod that in certain limited cases married men be allowed to be ordained to the priesthood.

In the book, the two men not only defend the Western Church’s long tradition of a celibate priesthood, but also complain about media manipulation of the synodal process.

After the news broke, Twitter exploded, with the general take that Benedict was trying to force Francis’s hand on priestly celibacy.

Is this a fair take? Probably not.

First and foremost, Benedict and Sarah are agreeing with Francis’s own stated position that “optional celibacy” for the priesthood is not on the table.

Just a year ago, he reiterated that point during his press conference on the return from his trip to Panama.

“Personally, I think that celibacy is a gift to the Church. Secondly, I would say that I do not agree with permitting optional celibacy, no,” Francis said on Jan. 28, 2019.

The pope then admitted possible limited exceptions, such as the Pacific Islands, before discussing more deeply one of the viri probati proposals to ordain older, “proven men” – similar to those chosen for the permanent diaconate – to provide sacraments in remote areas.

Such a possibility was endorsed by the October 2019 Amazon synod as a way to provide sacraments to a region where people might see a priest only once or twice a year.

Francis – and most of the synod fathers – have been clear that celibacy as a rule is not being questioned; but rather, they are looking at possible exceptions to the rule for pastoral necessity.

Of course, Benedict is more than familiar with this idea, since he more than any other previous pontiff has facilitated the reality of married priests in the Western Church (most of the Eastern Rites of the Catholic Church allow married men to be ordained.)

Benedict’s 2009 document Anglicanorum Coetibus provided for the establishment of Ordinariates to provide pastoral care for former Anglicans who had become Catholic; including their mostly married clergy. Benedict established three ordinariates – one each in the UK, North America, and Australia – all of which have a large percentage of married priests.

When Benedict made these provisions, he was not wavering on his commitment to priestly celibacy; he was establishing an exception based on pastoral need.

(Some of those commentators attacking the pope emeritus have brought up Anglicanorum Coetibus to show the pontiff’s apparent hypocrisy, as opposed to using it as a lens in which to read his latest book.)

Then why did Benedict and Sarah feel the need to write their new book?

According to excerpts in America magazine, the authors expressed concern that “the strange mediatic synod had prevailed over the real synod,” and called on the Church “not to be impressed” by “the bad advocacies, the diabolical lies, the erroneous ways by which they wished to devalue priestly celibacy” in the media reporting of the Amazon synod.

To more fully understand Benedict and Sarah’s point, look no further than Deutsche Welle’s report on the new book: “Some believe the more progressive Pope Francis may attempt to remove celibacy as a requirement for all priests” – even though Francis is on record saying the exact opposite.

None of this takes away from the legitimate debate on the role of the “emeritus pope” in the life of the Church. When he retired, Benedict said he would be “hidden from the world,” but this hasn’t kept him from continuing to occasionally wade in on the issues facing the Church.

But painting this latest chapter as an attack on Francis is more the stuff of cable television than reality.