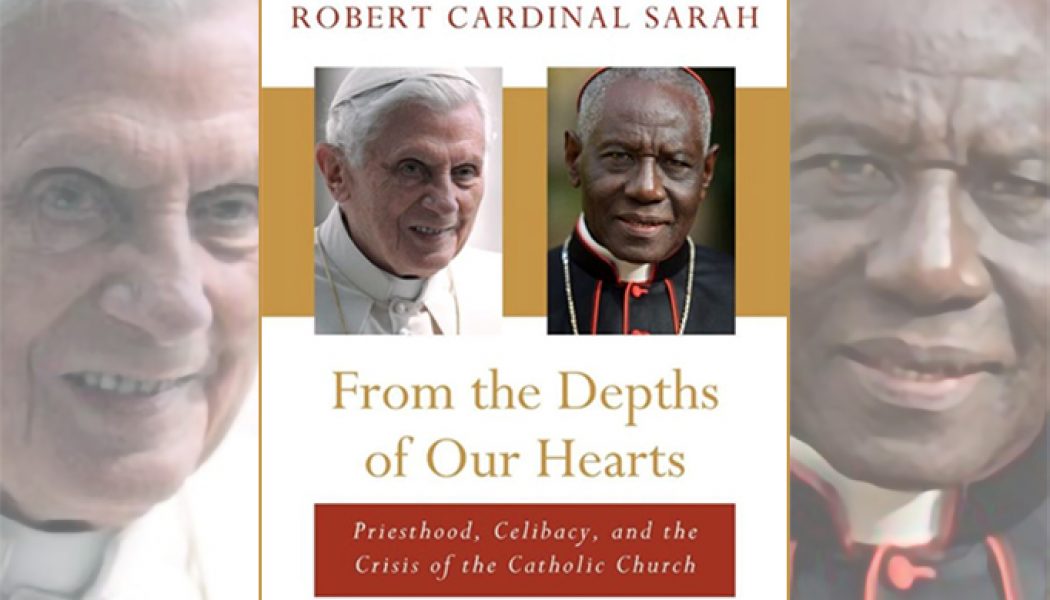 The book, entitled From the Depths of Our Hearts, addresses the ‘dark time’ the Catholic priesthood is enduring because of Church scandals and ‘the constant questioning of their consecrated celibacy.’

VATICAN CITY — Pope Emeritus Benedict XVI has taken the surprising and historic step of co-authoring his first book since his resignation almost seven years ago — and by asking in it that Pope Francis not allow the ordination of married men to the priesthood in the Latin Church.

The 175-page book, entitled Des Profondeurs de nos cœurs (From the Depths of Our Hearts) and written with Cardinal Robert Sarah, the prefect of the Congregation for Divine Worship and the Discipline of the Sacraments, discusses the spiritual challenges confronting today’s priests, and draws attention to the danger of ordaining married men as priests, which they see as placing the Church’s future in jeopardy.

The work, consisting of two separate texts by Benedict XVI and Cardinal Sarah who jointly co-signed an introduction and conclusion, also aims to be a “homage to the priests of the whole world.”

Consisting of four chapters and a foreword by Cardinal Sarah’s biographer Nicolas Diat, it will be published in French on Jan. 15, with Ignatius Press publishing an English edition on Feb. 20 (available for pre-order starting Jan. 13).

In a Jan. 12 statement, Ignatius Press described the book as “a serious and unflinching look at the crisis in the Catholic Church” which “pinpoints the heart of the turmoil — priestly ministry.”

“The priesthood is going through a dark time,” Pope Emeritus Benedict XVI and Cardinal Sarah write. “Wounded by the revelation of so many scandals, disconcerted by the constant questioning of their consecrated celibacy, many priests are tempted by the thought of giving up and abandoning everything.”

Coming out ahead of Pope Francis’ post-synodal apostolic exhortation on the Pan-Amazon synod, the book is partly aimed at deterring papal approval of ordaining married permanent deacons to the priesthood, ostensibly to bring the sacraments to remote areas of the Amazon suffering from a shortage of priests.

Critics see the proposal, extensively discussed at the synod and passed by just over two-thirds of the synod fathers, as a step to weakening mandatory priestly celibacy in the Latin Church worldwide.

According to a Jan. 13 exclusive by Le Figaro’s Rome correspondent Jean-Marie Guènois, who has seen an advance copy of the book, Benedict draws on Christianity’s Jewish roots, dismisses Martin Luther’s theses in favor of married clergy and shows that priesthood and celibacy are part of the “new covenant” instituted by Christ in which “total oblation is the model.”

“The conjugal state concerns man in his totality, and since the service of the Lord also requires the total gift of man, it does not seem possible to realize the two vocations simultaneously,” Benedict writes, according to quotes in Le Figaro. “Thus, the ability to renounce marriage in order to place oneself totally at the disposal of the Lord is a criterion for the ministry if it is to be carried out simultaneously.”

Cardinal Sarah writes of “an ontological-sacramental link between priesthood and celibacy” and argues that “any weakening of this link would call into question the magisterium of the Council and of Popes Paul VI, John Paul II and Benedict XVI.”

“I humbly implore Pope Francis to protect us definitively from such an eventuality by forbidding any weakening of the law of priestly celibacy, even if limited to one region or another,” the prefect of the Congregation for Divine Worship and the Discipline of the Sacraments continues. “The possibility of ordaining married men would represent a pastoral catastrophe, an ecclesiological confusion and an obscuring of the understanding of the priesthood.”

In his article, Guènois writes that the book contains “no aggression or polemics” against Francis. “On the contrary,” he says that both authors “present themselves as two bishops” in obedience to Pope Francis, who “cherish the truth” and are acting “in a spirit of love for the unity of the Church.”

The Pope Emeritus and the cardinal write that they are far from the “ideology” that “divides” or “quarrels between people, political maneuvers, power games, ideological manipulations and bitter criticism that play into the hands of the devil, the divider, the father of lies.”

According to Guènois, they also “do not underestimate in any way” the challenge of living priestly celibacy, and even “go so far as to give concrete advice to priests,” but they add that this is no reason to abandon this discipline. They also argue against changing the celibacy rule in view of the sexual abuse crisis, a proposal frequently raised recently in Germany.

Guènois explains in his story how both Benedict XVI and Cardinal Sarah have developed a strong alliance over the years, and he notes that the Guinean cardinal has become a frequent visitor to Benedict’s Mater Ecclesiae residence in the Vatican.

The idea of a collaborative venture had its genesis a year ago, but neither the Pope Emeritus nor Cardinal Sarah had a clear notion at that stage what form it should take, according to Guènois. The French journalist reported that the book became a reality during the Pan-Amazon synod (Cardinal Sarah took part as a synod father) when more than two-thirds of synod fathers voted in favor of ordaining married deacons as priests in the Amazon.

The possibility that Francis might approve the proposal in his post-synodal apostolic exhortation, expected in early spring, was “one of the triggers for this project,” even though Benedict XVI had “already drafted several notes for a potential document on the ‘crisis of the priesthood,’” Guènois writes. “In the end, he set them aside ‘out of weariness,’ he confided, and his friend Cardinal Sarah decided to get back to work.”

“Through an exchange of documents and during working sessions where they spoke in French and Italian — recounted in a foreword by Nicolas Diat, the editor of the book published by Fayard — they refined their two respective texts and wrote the introduction and conclusion together,” explains Guènois.

In its Jan. 12 statement, Ignatius Press said Pope Emeritus Benedict XVI and Cardinal Robert Sarah “give their brother priests and the whole Church a message of hope” and “honestly address the spiritual challenges faced by priests today, including struggles of celibacy.

“They point to deeper conversion to Jesus Christ as the key to faithful and fruitful priestly ministry and Church reform,” the statement continued. “This book is a crucial message for clergy and laity alike, and will likely become a catalyst for renewal and restoration for a hurting Church.

“Their book is not just about priestly celibacy, important as that is in itself,” said Ignatius Press founder and editor, Jesuit Father Joseph Fessio, in the Ignatius news release. “It is about, as Pope Emeritus Benedict XVI describes it in his first paragraph: ‘the lasting crisis that the priesthood has been going through for many years.’ But it is about more than that; it is about the nature of the Church and of Christian discipleship. This is a book that all should read. It is powerful and personal — from the depths of their hearts.”