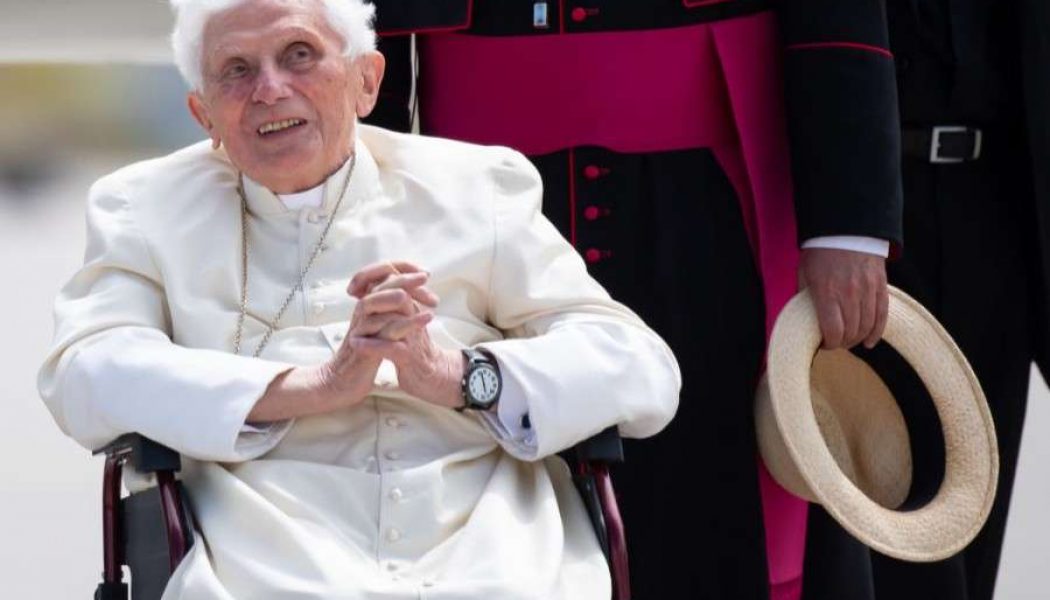 Vatican City, Jun 22, 2020 / 06:00 am MT (CNA).- Pope emeritus Benedict XVI arrived back in Rome Monday after a four-day trip to Germany to visit his ailing brother.

The Diocese of Regensburg reported June 22 that 93-year-old Benedict XVI said goodbye to his 96-year-old brother, Msgr. Georg Ratzinger, who is in poor health, before departing for Munich airport.

“It is perhaps the last time that the two brothers, Georg and Joseph Ratzinger, will see each other in this world,” the Regensburg diocese said in an earlier statement.

Benedict XVI was accompanied on the journey to the airport by Bishop Rudolf Voderholzer of Regensburg. Before the pope emeritus boarded an Italian air force plane he was greeted by Bavaria’s premier Markus Söder. The Süddeutsche Zeitung, a German daily newspaper, quoted Söder as saying that the encounter was a moment of “joy and melancholy.”

The pope emeritus landed in Rome at 1 p.m. local time, according to Vatican News. Benedict XVI and his entourage arrived 45 minutes later at the Mater Ecclesiae monastery, his residence in the Vatican.

“The two brothers met nine times. Each of these encounters has clearly given them vitality, fresh courage and joy. Nine times they found each other with few words, with the familiar gestures and above all in prayer. Up to this day, the Eucharist was celebrated every day at the bedside — in the smallest circle. On Friday, on the Feast of the Sacred Heart, I was allowed to preside at Mass. One feels this is the source upon which they live.”

The bishop of Regensburg continued: “Benedict’s journey was perhaps also a farewell to his Bavarian homeland … It was palpable how much Benedict blossomed when he saw the familiar landscape, the familiar lanes and paths, and, above all, the people through the windows of his car.”

Voderholzer added: “Benedict’s journey was also a spiritual journey. In my view, a circle was closed when we prayed together on Sunday at the shrine of St. Wolfgang in the Regensburg Cathedral. We prayed an intercessory litany to St. Wolfgang, then the Our Father, an Ave Maria. We sang the Te Deum and the Salve Regina. I asked Benedict for his blessing for the faithful and the church in Regensburg, which he willingly gave.”

Benedict XVI was born Joseph Aloisius Ratzinger in the town of Marktl in Bavaria in 1927. His older brother Georg is his last living family member.

On his final full day in Bavaria, Benedict XVI offered Sunday Mass with his brother in Luzengasse, Regensburg. He later went to pray at the shrine of St. Wolfgang, the patron saint of Regensburg diocese.

Archbishop Nikola Eterović, the apostolic nuncio in Germany, traveled from Berlin to meet with the pope emeritus in Regensburg over the weekend.

“It is an honor to welcome the pope emeritus again in Germany, even in this difficult family situation,” Eterović said June 21 following their meeting.

The nuncio said his impression during his meeting with Benedict was “that he feels good here in Regensburg.”

The former pope arrived in Bavaria on Thursday, June 16. Immediately upon his arrival, Benedict went to see his brother, the diocese reported. The brothers celebrated Mass together at the house in Regensburg and the pope emeritus then went to the diocesan seminary, where he stayed throughout the visit. In the evening, he returned to see his brother again.

On Friday, the two celebrated Mass for the Solemnity of the Sacred Heart of Jesus, according to a statement.

On Saturday the former pope visited the residence in Pentling, just outside Regensburg, where he lived while serving as a professor from 1970 to 1977.

His last time seeing the home was during his 2006 pastoral trip to Bavaria.

The diocese said Benedict XVI then stopped at the Ziegetsdorf cemetery to spend time in prayer at the graves of his parents and sister.

Benedict stayed at his Pentling home and in its garden for about 45 minutes, and was reportedly moved by old family portraits.

During his visit to the cemetery an Our Father and Hail Mary were prayed.

“I have the impression that the visit is a source of strength for both brothers,” Schaller said.

According to Regensburg diocese, Benedict XVI traveled “in the company of his secretary, Archbishop Georg Gänswein, his doctor, his nurse and a religious sister. The Pope emeritus made the decision to travel to his brother in Regensburg at short notice, after consulting with Pope Francis.”

Msgr. Georg Ratzinger is a former choir master of the Regensburger Domspatzen, the cathedral choir of Regensburg.

On June 29, 2011, he celebrated his 60th anniversary as a priest in Rome together with his brother. Both men were ordained priests in 1951.