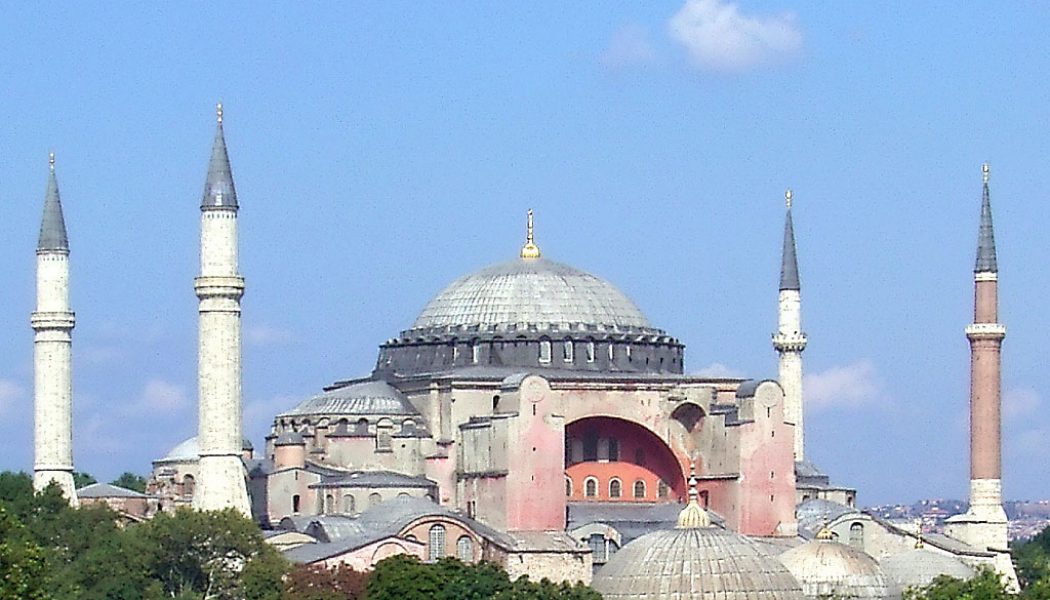 The four gigantic minarets surrounding Hagia Sophia serve as a constant reminder of the Turkish triumph in 1453 over the holy city founded by the emperor Constantine. The church, turned mosque, turned museum, and now reverted to a mosque stands undoubtedly among the greatest architectural accomplishments in human history. Its unique floor plan with a central dome and two half domes overawes, leading many to say with the envoys from Kiev, “we knew not whether we were in heaven or on earth.” The church contains many great icons, although they unfortunately only come from the later Byzantine period, as the earlier ones were destroyed, not by Turks but by iconoclastic emperors (something to ponder). Fortunately, the Turks covered the great icons with plaster, allowing them to be uncovered in the 20th century. What will happen to them now, we do not know.

Further to the west of the great cathedral, just outside the original city walls, stands the Chora Church, also turned mosque, then museum, and now mosque again. It is far less well known but I would argue its artistic significance does not lag far behind the great church. We think of the East for its mosaics, and Chora does have great ones, but it represents the high point of Byzantine painting, with amazing frescoes, such as its most famous image depicting the Resurrection:

The Chora Church (the Church of the Holy Saviour in the Country) has ancient roots, founded in the 4th century as a monastery. It was only outside of the walls for about a hundred years, although the current structure and decoration mostly date to the 14th century. In particular, it was Theodore Metochiles (1270–1332), advisor to the Emperor Andronikos II Palaiologos and writer, who served as patron for the church’s art (and he retired in the monastery after a brief political exile).

The Church offers a unique combination of masterful mosaics and frescoes, as can be seen this comparison of a mosaic of St. Paul and a fresco of St. Cyril of Alexandria.

The Church certainly stands as a masterpiece of the Paleologan Renaissance that bears some parallels to the Renaissance beginning contemporaneously in Italy. The mosaics and frescoes attain a deeper expressive quality and attention to realistic detail, though still clearly in the Byzantine style. Here are two great examples, one a mosaic of Cana and the other a close up of the painted Parecclesion Dome (that is, the side chapel, the site of the paintings).

And to show at least a glimpse of the grandeur of the site, here are views of the mosaics down the main apse and also the paintings of the Side Chapel.

Even if the Byzantine Empire has fallen, its legacy survives. The surviving churches of Constantinople/Istanbul not only continue to inspire Christians throughout the world but truly constitute a key component of the human patrimony. We must show vigilance and concern over the fate of this great art and do all that we can to prevent a new, destructive conquest.