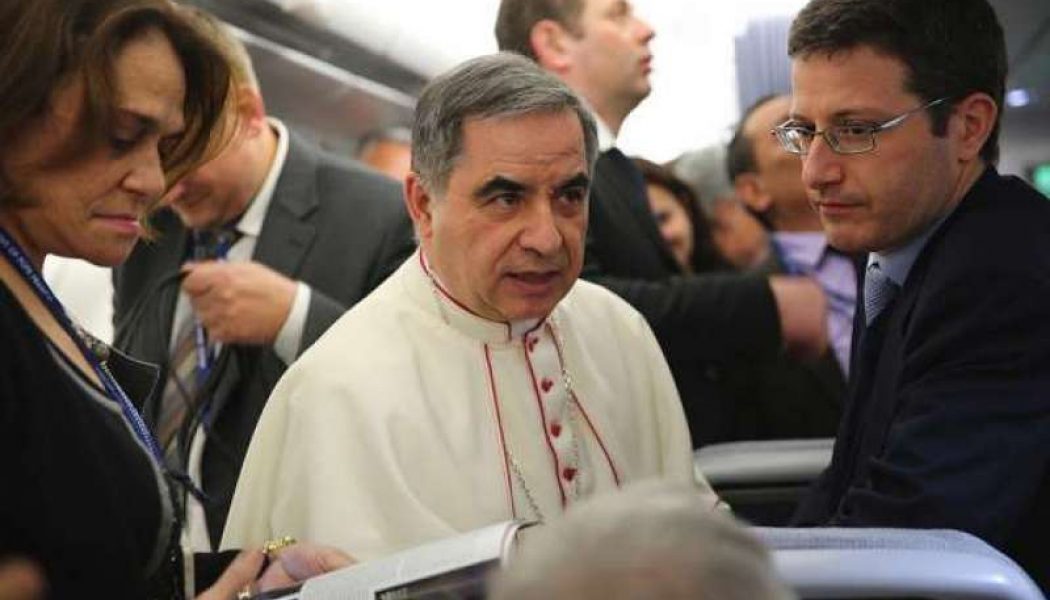 Rome Newsroom, Oct 18, 2020 / 03:12 am MT (CNA).- Cardinal Giovanni Angelo Becciu again denied having interfered in any way with the trial of Cardinal George Pell, after Italian media reported an allegation that Becciu might have wired money to Australia as a bribe during Pell’s trial.

An Oct. 17 statement from Becciu’s lawyer, Fabio Viglione, said the cardinal, “regarding the everlasting attention of some journalists to Cardinal Pell’s trial, is compelled to reiterate vigorously that he has never interfered with it in any way whatsoever.”

The lawyer also said “to protect and defend his honor, so gravely damaged,” Becciu may seek legal recourse against some news organizations for their continued reporting of “an alleged, albeit non existent activity to taint the evidence of Cardinal Pell’s trial.”

Becciu’s latest denial comes after speculative reports in Italian newspapers earlier this month indicated he had been accused of wiring money from an undisclosed Vatican account to Australia while Pell was facing a 2018 criminal trial, on charges that he sexually abused two boys while he was Archbishop of Melbourne in the 1990s.

Pell was convicted of that charge, after a first trial ended in a hung jury, and in 2019 sentenced to prison. He was freed on April 7, 2020, after Australia’s High Court concluded the jury in Pell’s trial did not act rationally when it found no possibility of doubt in the charges the cardinal faced.

Reports that Becciu may have transferred money to Australia to set up Pell have attracted international attention.

The allegation, which CNA has not independently corroborated, is reportedly tied to Msgr. Alberto Perlasca, a former Becciu deputy who is said to be cooperating with investigators. But while the supposed allegations have made headlines in Italy, Australia, the U.K, and the U.S., they have not been independently confirmed and remain attributed only to anonymous sources.

Until 2017, Pell led an effort called for by Pope Francis to bring order and accountability to the Vatican’s finances, which have long lacked centralized procedures, controls, or oversight. Pell clashed in that role with Becciu, who as sostituto of the Vatican’s Secretariat of State served effectively as the pope’s chief of staff. Becciu at one point acted to cancel a contract Pell had made for an external audit of Vatican finances.

Since at least 2018, criminal investigators have been reviewing a web of investments and transactions at the Secretariat of State that are connected to Becciu; last month the cardinal was fired from his position at the Vatican and resigned “the rights proper to cardinals,” while formally remaining a member of the College of Cardinals.

It is believed Becciu may soon face criminal charges for his role in several Vatican investment and financial schemes of questionable integrity and legality that amount to hundreds of millions of euros.

A woman at the center of the most recent Vatican financial scandal, who is alleged to be closely connected with Becciu, is currently being held in an Italian jail pending extradition to the Vatican.
Cecilia Marogna, a self-described geopolitical analyst, was arrested Oct. 13 by Italian financial authorities after a warrant was issued by Vatican prosecutors through Interpol.

Marogna has said she worked for the Holy See’s Secretariat of State as a security consultant and strategist. Vatican authorities reportedly issued the warrant on charges of aggravated embezzlement. She has acknowledged receiving hundreds of thousands of euros from the Vatican via her company registered in Slovenia, and confirmed use of the funds for the purchase of luxury items, including designer label handbags.

She has stated that the money all went to her Vatican consultancy work and her salary; expensive gifts, such as trips or purses, she said, “were used to create cooperative relationships.”

Although a Milan court of appeal has upheld the execution of the warrant, lawyers for Marogna have appealed her extradition to Vatican City, a process that is expected to take as long as a month to complete. Pending the outcome of the appeal, Marogna is being held in a local jail after the Milan court deemed her a flight risk.