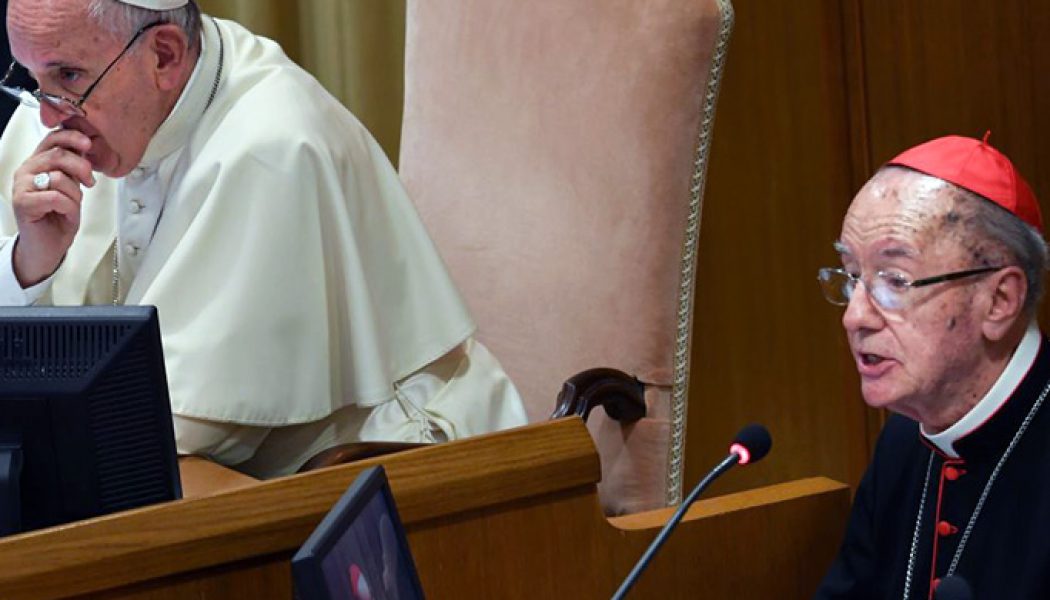 Pope Francis listens as Cardinal Claudio Hummes addresses the Special Assembly of the Synod of Bishops for the Pan-Amazon Region, Oct. 7, 2019, at the Vatican. (Photo by Andreas Solaro/AFP via Getty Images)

In a letter circulated privately to bishops, the Brazilian cardinal advises the document is on schedule to be promulgated later this month or in early February.

Cardinal Claudio Hummes, the general relator of the Pan-Amazon Synod last October, has written a letter to bishops saying Pope Francis’ post-synodal apostolic exhortation is expected to be “promulgated by the end of this month or early February.”

The letter, which seeks to prepare bishops ahead of the publication of the exhortation, offers them some suggestions in order to “discreetly support you, as Ordinary, in communion with Pope Francis,” according to a copy obtained and published by the Italian Vaticanist, Aldo Maria Valli, and confirmed as authentic.

At the end of the missive is a list of related reading material that Cardinal Hummes recommends the bishops read, including the synod’s final document, Cardinal Hummes’ introductory report given at the synod, Francis’ final speech at the synod on Oct. 26, and two chapters of Francis’ environmental encyclical Laudato Si, in particular Chapter 6 on “ecological education and spirituality.”

The Pope is preparing the apostolic exhortation on the synod, which took place “under the guidance of the Holy Spirit,” Cardinal Hummes begins his letter. The exhortation will bear the same title as the synod’s preparatory document: New Paths for the Church and for an Integral Ecology.

“The draft is currently under revision and correction, and will be translated later,” Cardinal Hummes writes. “Pope Francis hopes it will be promulgated by the end of this month or in early February.”

He adds that the exhortation is “eagerly awaited and will arouse great interest and different reactions,” and that therefore, in common with previous exhortations by Francis, the Pope will send bishops the text before it is published and before “press begins to make comments.”

In this way, bishops can “join him in presenting the exhortation and making it accessible to the faithful, to believers and all men and women of good will, the media, academics and others who hold positions of authority and prominence.”

The purpose of his letter, Cardinal Hummes adds, is to ensure there is “adequate preparation” and its suggestions are “not to advertise it or to draw attention” but rather to support each bishop as Pope Francis “prepares to receive the exhortation and communicate it to the people of God in his jurisdiction.”

The cardinal’s use of the word “receive” points to it being written by others and then submitted to him for approval. Indeed, such papal documents are usually the work of many hands, not just the Pope’s. The question is, who will be writing this one? A number of Francis’ most important documents have been written by one of his most trusted advisers, Archbishop Victor Manuel Fernandez of La Plata, Argentina.

It’s not known if the archbishop, a theologian and known as the ghostwriter of large portions of the Pope’s writings, such as Evangelii Gaudium, Amoris Laetitia, and Laudato Si, will be involved in this document, which is more likely to be written by associates of Cardinal Hummes and members of REPAM, the Pan Amazon Ecclesial Network that effectively ran the synod  and was set up in 2014 for that purpose.

In his letter, Cardinal Hummes advises that a “useful way to prepare” would be to read the documents suggested. Then, “within 10 days or so, you will receive a second letter with more tips,” he adds.

As the day of promulgation approaches, the cardinal says the bishops will receive the exhortation “via e-mail under embargo,” and an event will be held to communicate the document in the Vatican’s Paul VI hall where the synod was held.

“You might as well start planning a press conference or other event as soon as possible after the promulgation,” Cardinal Hummes advises. “For example, it might be appropriate to present the exhortation in your area with an indigenous representative, whenever feasible, a responsible pastoral expert (ordained or religious, or layman or laywoman), an expert on environmental issues, and a young person engaged in youth ministry.”

Cardinal Hummes asks that his letter and suggestions be kept confidential letter and to share it “only with those directly involved in the diocesan preparations of the exhortation, not with others or with the media.”

“Please carefully adhere to these guidelines,” he asks in closing. “With the hope that this letter will be helpful, let us unite in earnest prayer to Our Father of all mercies to bless Pope Francis and all the bishops in the promulgation and preparing the People of God in the Amazon and around the world to receive it with faith, hope, intelligence and effectiveness.”

Before the mountains were brought forth, or ever thou hadst formed the earth and the world, even from everlasting to everlasting, thou art God.
Psalm 90:2
DailyVerses.net

The Thrill of Hope: Christy Nockels Reflects on Advent

Work As Worship – The Benham Brothers

How do parents make travel easier for children with hidden disabilities?

Teens and Social Media: Whose Approval Are You Living For?

“The Fairness for All Act creates all the problems The Equality Act creates, then exempts a few people from those problems, then calls it religious liberty”…

Discernment shouldn’t stop when you enter the seminary…

Catholic parish will not host consecration for Episcopalians after all…

A Ride of Faith: Biking Across America with Jesus Calling

The priests we need to save the Church…

Rays of Hope: The Love Story of Joey + Rory

A Prison to Set You Free: Sheila Walsh’s Journey Through Depression

Father Paul Wattson: The Catholic convert who founded the Week of Prayer for Christian Unity…