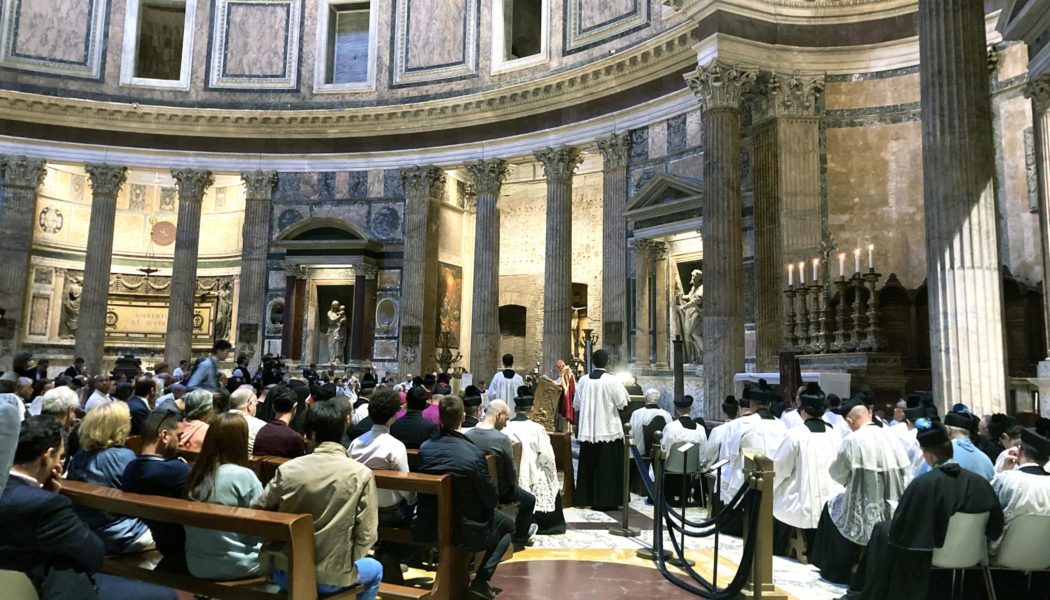 Although the Italian cardinal is more widely known for his social activism and closeness to those on Italy’s political left, he is also friendly to adherents of the traditional liturgy.

VATICAN CITY — Despite Vatican restrictions on the ancient liturgy, the head of Italy’s bishops’ conference, known for social activism and his closeness to Italian leftist politics, presided at traditional solemn Vespers in the Pantheon in Rome this evening.

Cardinal Matteo Zuppi of Bologna, a Rome native with close connections to the Sant’Egidio lay community but who is also friendly to adherents of the ancient liturgy, led the liturgical celebration and gave a short homily.

Asked if he thought Pope Francis’ July 2021 motu proprio Traditionis Custodes (Guardians of Tradition), which aims to severely restrict the ancient liturgy so that eventually the post-1970 reformed liturgy might become the “unique expression” of the Roman rite, was a problem, Cardinal Zuppi said: “No, I think it was a directive that the Pope thought was useful, and it is to be applied with great awareness and with great responsibility.”

This evening’s liturgy in the 1,900-year-old former Roman temple, consecrated a Catholic church in AD 609 and now known as the Basilica of St. Mary and the Martyrs, was organized by the Institute of the Good Shepherd, a French-based society of apostolic life dedicated to the Latin Mass.

The solemn Vespers, on the feast of the apostles Sts. Simon and Jude, was also attended by priests from other traditional institutes such as the Priestly Fraternity of St. Peter (FSSP) and the Institute of Christ the King Sovereign Priest (ICKSP), as well as diocesan priests who celebrate the traditional Latin Mass.

Hundreds of faithful from all over the world also took part in the liturgy, which was part of a three-day “Populus Summorum Pontificum” pilgrimage to the See of Peter organized by the Coetus Internationalis Summorum Pontificum, a group of 12 traditional associations.

Considered by some to be a leading candidate to succeed Pope Francis, Cardinal Zuppi is an unlikely ally of the ancient liturgy given his background which places social activism above liturgical concerns. He has also become known in recent years for some distinctly heterodox positions, especially regarding homosexuality.

In 2018, he drew controversy when he wrote the preface to Jesuit Father James Martin’s book Building a Bridge, and in 2020, he penned another preface to a book on the same subject called The Church and Homosexuality by Luciano Moia that advocated a “new attitude of pastoral responsibility” on the issue. Earlier this year, he was accused of covering up what observers said amounted to the first blessing of a homosexual couple in a church in his diocese.

But despite this, he has kept the channels of dialogue open with those who favor the Church’s tradition, and has celebrated the traditional Latin Mass on at least two occasions in the past. He also recently visited the seminary of the Institute of Christ the King Sovereign Priest in Gricigliano near Florence and was impressed by the number of vocations it had attracted.

Cardinal Zuppi was known for many years in his native Rome as a “street priest” because of his efforts to help the disadvantaged. His activities ranged from helping marginalized children in Roman slums and the elderly, to immigrants, the homeless, the terminally ill, the disabled and drug addicts, prisoners and victims of conflicts. He also took part in many ecumenical and interreligious dialogue activities.

The annual event was founded in 2012 as a contribution of supporters of the ancient liturgy to the new evangelization. It was also meant to show gratitude to Pope Benedict XVI, who, by publishing his motu proprio Summorum Pontificum in 2007, freed up the celebration of the ancient liturgy.

In his talk, Valli witnessed to how his relatively recent return to the traditional Mass had moved him and others. “This Mass is indeed extraordinary, in fidelity to doctrine and liturgy,” he said, and noted how it had been “kept secret as if it were dangerous, as if we should be ashamed of it.” In the old Mass, he observed, “everything is sacred, everything tends from God and returns to God, and one enters a higher, more solemn dimension.”

He then recalled many testimonies he had received from readers, and noted that “more and more people are approaching it” and “derive from it joy, a sense of completeness, and growth of faith.” The testimonies, he said, were “all full of awe and gratitude but also deep regret for time that has passed before rediscovering this great treasure.”

On Saturday the pilgrims will take part in Eucharistic Adoration and then a procession through Rome to St. Peter’s Basilica where a Solemn Traditional Latin Mass will be celebrated at the Altar of the Chair. The three-day event will conclude with a traditional Mass on the old-rite feast of Christ the King in the church of the Holy Trinity of the Pilgrims in Rome.