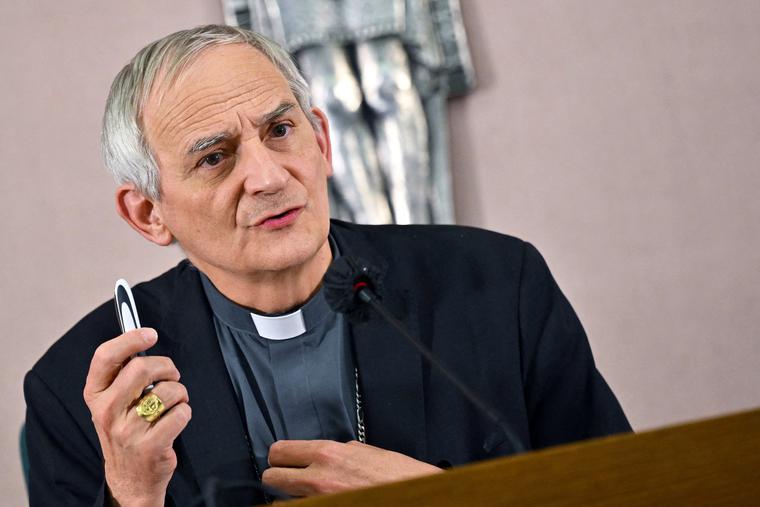 ROME — An Italian Catholic newspaper has accused Cardinal Matteo Zuppi, the president of Italy’s bishops’ conference, of covering up what observers say amounted to the first blessing of a homosexual couple in a church in Italy earlier this month.

In an article in Tuesday’s La Nuova Bussola Quotidiana, headlined “Blessing of Gay Couple, Cardinal Zuppi’s Lies,” editor Riccardo Cascioli said that the Archdiocese of Bologna made a number of false claims in a statement attempting to justify the ceremony.

The “blessing” of Pietro Morotti and Giacomo Spagnoli took place in the presence of six priests at the church of San Lorenzo di Budrio, close to the registry office where the civil union had taken place earlier that day.

La Nuova Bussola Quotidiana reported that it was billed as a “Mass of Thanksgiving” in order not to appear to violate the Church’s teaching which, according to a 2021 Responsum from the Congregation for the Doctrine of the Faith, clearly forbids the blessing of homosexual couples.

However, according to La Nuova Bussola Quotidiana, the event had all the appearance of a blessing. Marotti and Spagnoli had already made clear in a video published last year of their wish for the Church’s blessing on their union. At the ceremony, they also stood at the altar and were handed a symbolic apron by the priest, a recognition of their service to the pro-homosexual group “In Cammino,” to which they belong.

Celebrant Father Gabriele Davalli told La Nuova Bussola Quotidiana that Cardinal Zuppi was aware of the June 11 ceremony. He had “informed him myself.”

In its June 19 statement, the Archdiocese of Bologna denied the Mass constituted a blessing of a homosexual union, saying it was a “Mass of Thanksgiving of the group ‘In Cammino.’” The archdiocese said this group had been present in the diocese for 30 years, with a mission to “accompany and support people with homosexual tendencies in Christian life,” and is committed to opposing “all discrimination and violence on a sexual basis.”

It cited other aspects it attributed to the group, including helping homosexual men and women to “adhere freely and responsibly to one’s baptismal call.” The archdiocesan statement also used selective quotes from the Congregation for the Doctrine of the Faith’s 1986 “Letter to the Bishops of the Catholic Church on the Pastoral Care of Homosexual Persons” to justify the ceremony.

In common with other Church groups, including the Secretariat of the Synod of Bishops, the archdiocese’s statement used Article 150 of the Final Document of the Youth Synod to justify a pro-homosexual position. That article states that “all young people, without exception, are helped to integrate the sexual dimension of their personality more and more fully, as they grow in the quality of their relationships and move towards the gift of self.”

“The Church of Bologna, in full harmony with the Magisterium and the Doctrine of the Church, continues along the path indicated to all: the path of discernment, pastoral accompaniment and closeness, in the prudence necessary for people’s lives and their journey,” the statement concluded.

But Cascioli called the statement a “concentration of lies,” firstly by attempting to “deny the evidence” of a blessing. He began by pointing out that Morotti and Spagnoli were not present merely as members of the group “In Cammino” as the statement implied; instead, it was an ad hoc Mass organized just for the two of them. As evidence, Cascioli published the contents of a WhatsApp message in which Marotti invited his friends to take part in the ceremony.

“On Saturday 11 June 2022, barring unforeseen events, Giacomo and I will civilly unite at the Budrio town hall,” Marotti wrote. “Immediately after, in the church opposite, we will celebrate a Mass of thanksgiving / entrusting our life together.”

Cascioli wrote that the Mass of entrustment “is the equivalent of a blessing for the couple, but avoids formally transgressing the CDF Responsum that prohibits the blessing of same-sex unions.”

Cascioli added that “second lie” was the falsely-claimed purpose of “In Cammino,” which is not simply to  “‘accompany and support people with homosexual tendencies in Christian life,’ as the diocesan statement claimed, but to bring into the heart of the Church the LGBT agenda, the legitimacy of any sexual orientation, the practical application of gender ideology, including acceptance of civil unions.”

“‘In Cammino’ does not take the Church’s doctrine on gender and homosexuality seriously; it simply wants to change it or, better to say, subvert it — something that Cardinal Zuppi evidently consents to,” Cascioli observed.

A further deception, he added, was the emphasis in the statement on the group being in the archdiocese 30 years, falsely giving the impression of continuity with previous archbishops of Bologna — Cardinal Carlo Caffarra and Cardinal Giacomo Biffi. But “In Cammino” operated clandestinely until Cardinal Zuppi’s arrival, Cascioli said, when “everything changed” and he invited the group to come out in the open as part of the archdiocese’s pastoral care.

He added that the 1986 CDF letter to bishops was quoted in a “partial, incorrect and misleading way,” quoting just one sentence from it — that it is “reductive to define people’s identity starting solely from their ‘sexual orientation’” — and failing to include the document’s denunciation of the homosexual lobby and its clear explanation of the Church’s teaching on same-sex relationships, including for homosexual people to avoid “near occasions of sin.”

In fact, Cascioli stressed, that document “clearly condemns the activities of those such as the ‘In Cammino’ group” and the blessing of same-sex couples.

In 2018, Cardinal Zuppi, considered by some to be a leading candidate to succeed Pope Francis, drew controversy when he wrote the preface to Jesuit Father James Martin’s book Building a Bridge. The book was work criticized for its failure to stress the importance of celibacy and chastity, and to acknowledge same-sex attracted Catholics trying to live in obedience to Church teaching.

In 2020, the cardinal-archbishop of Bologna penned another preface to a book on the same subject called The Church and Homosexuality. Edited by Luciano Moia, a journalist with the Italian bishops’ publication Avvenire, the book advocated a “new attitude of pastoral responsibility” on the issue.