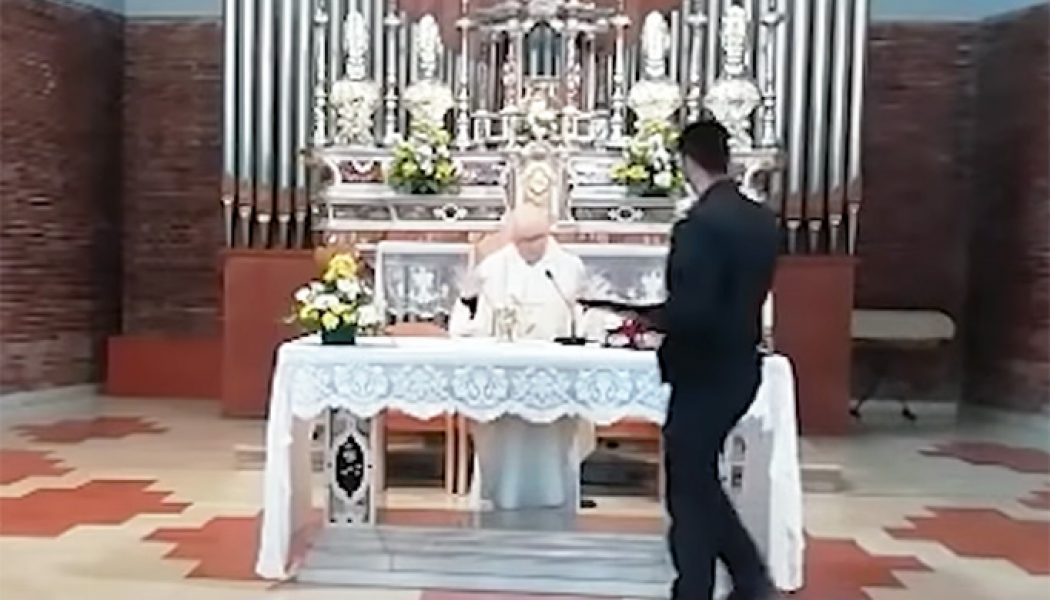 The incident in northern Italy is one of a number of cases where authorities have overstepped applying the government’s lockdown rules, according to critics.

ROME — An attempt by Italian police to halt a Mass in a northern Italian church because it appeared to be violating state-decreed lockdown rules has led to criticism of heavy-handedness on the Catholic Church by overzealous civil authorities.

Captured on video and published by local newspaper Cremona Oggi, as Father Lino Viola was celebrating Mass on Divine Mercy Sunday in the church of San Pietro Apostolo in Soncino in the province of Cremona — one of the areas hardest-hit by the coronavirus — a member of the Carabinieri, Italy’s military police, entered the church before the canon and ordered the Mass to stop.

Father Viola, 80, had left his church open, which is allowed, and was saying Mass for six parishioners whose relatives had died from the virus, including one recently who could not be given a funeral. Seven others helped him with the liturgy, which is permitted under the rules of the lockdown decree. All of those attending wore gloves and masks and kept the required social distance, according to Father Viola.

The police officer got the local mayor on the phone when Father Viola continued to celebrate the Mass, but the priest refused to speak with him and carried on with the liturgy..

The police fined Father Viola 680 euros ($735) for non-compliance, which he said he would pay, and the faithful were also fined. “That’s not the problem,” the priest told the Italian-language La Nuova Bussola Quotidiana newspaper on April 20, saying the real problem was the violation of the sacred liturgy. “Nobody can desecrate the Mass in this way — not even the police,” he said. “I had to say, ‘Enough.’”

The government decreed March 9 that all public civil and religious ceremonies were to be suspended, including weddings, baptisms and funerals. The Italian bishops complied with the decree, barring all public Masses and initially ruling that all churches be closed before reversing the decision a day later, although in practice many churches in the country have remained closed.

Father Viola told the newspaper that, in 55 years of priesthood, he had never experienced such an intrusion. He also expressed his consternation that the Carabinieri officer sent to enforce the ruling had told him afterward he did not know what the consecration was.

Regarding the six parishioners mourning the death of their loved ones, Father Viola told La Nuova Bussola, “How could I, in holy patience, send them away? There was a parishioner who had just lost his mom and couldn’t even give her a funeral.”

After the incident, the priest said he called Cremona Bishop Antonio Napolioni to explain what happened, and said the bishop noted with disapproval that the church doors were open when they shouldn’t have been, to which Father Viola said there is no decree saying the church doors should be closed.

“The church is inhabited not by a dead man, but by a living man who has overcome death,” he told La Nuova Bussola Quotidiana. “What do these people believe here?” Father Viola wrote a letter back to the bishop explaining precisely what happened.

In comments reported in Il Giorno, another Italian-language journal, the diocese said, albeit regretfully, that the rules must be respected and praised those priests who celebrate Masses privately using technology to allow the faithful to participate.

But a stronger reaction came from Cardinal Angelo Becciu, prefect of the Congregation for the Causes of Saints, who commented on Twitter:

“From one priest amazed at what happened to a confrere in the diocese of Cremona, I say: the principle that no authority is allowed to interrupt Mass must be defended. If the celebrant is guilty of some infraction, he should be corrected afterwards, not during!”

The Cremona incident follows concerns earlier this month that the state was infringing on religious freedom and acting unconstitutionally when it ruled that people could enter a church only if they were on their way to buy groceries, medicine or for another state-approved reason.

There have also been a number of similar incidents, including in Piacenza in northern Italy, on April 19, when police waited until the end of the Mass before questioning the priest. No punitive action was taken but it led to the local bishop, Bishop Gianni Ambrosio, writing a letter to his priests stressing the importance of observing the rules, especially as the region has been heavily hit by the virus.

“I know what happened was moved by good will, love for the Eucharist and for the suffering, but [complying with the rules] helps us to live even more closely in communion and to seek the good of all,” he wrote.

From March 20 until April 13, the Vaticanist Marco Tosatti recorded 22 other examples of what he sees as heavy-handedness against the Church, most of which involved police halting private or livestreamed Masses and fining or reporting those involved.

Other cases included carabinieri interrupting a child’s baptism on March 20 at a church near Naples, and reporting his parents, godfather and a photographer; sanctioning 13 people, including a priest, at a Good Friday liturgy outside a church in Lecce, southeast Italy, and fining and reporting 30 pilgrims for walking to a shrine near Naples.

On March 25 a group of faithful appealed to Italy’s bishops complaining of an incident in Cerveteri north of Rome when municipal police officers interrupted a Mass on March 15. Tosatti and others have contrasted the authorities’ treatment of the faithful and that of unknown anarchists and Satanists who were able to deface a Marian shrine in Bologna.

Bishop Napolioni and the Italian bishops in general are pressing for the churches to be fully reopened and for parishioners to return to “community life.” Concerned that many of the faithful won’t come back to Mass if this continues too long, they are currently in talks with the government to ease the restrictions soon.

But according to an April 21 report in the Italian newspaper La Nazione, the bishops are struggling to make headway and have been “put on hold.”

“Their dossier is at the bottom of the list, after companies and producers,” wrote correspondent Nina Fabrizio, adding that the bishops are growing impatient, writing in their most recent letter to the government that if the “restrictions are prolonged and not proportionate to how the epidemic develops, then it would assume the character of arbitrariness.” The article also noted that the patience of some faithful is “boiling over” and comments on social media are becoming increasingly impassioned, with accusations that the bishops are under the thumb of the bishops.

But many bishops find themselves in a difficult position, or as Bishop Giovanni D’Ercole of Ascioli Piceno, said, “between two fires.” On the one hand, he said “people are pressing us, and on the other, government directives [relaxing the restrictions] are still not forthcoming.” He said he often receives letters from the faithful, “even a few angry ones,” implying it was “we bishops who enforced the ban.”

He said many do not understand that it is “the government that makes the decisions,” adding that this should prompt a “wide reflection” as the government is “placing its hands in the internal affairs of the Church.”