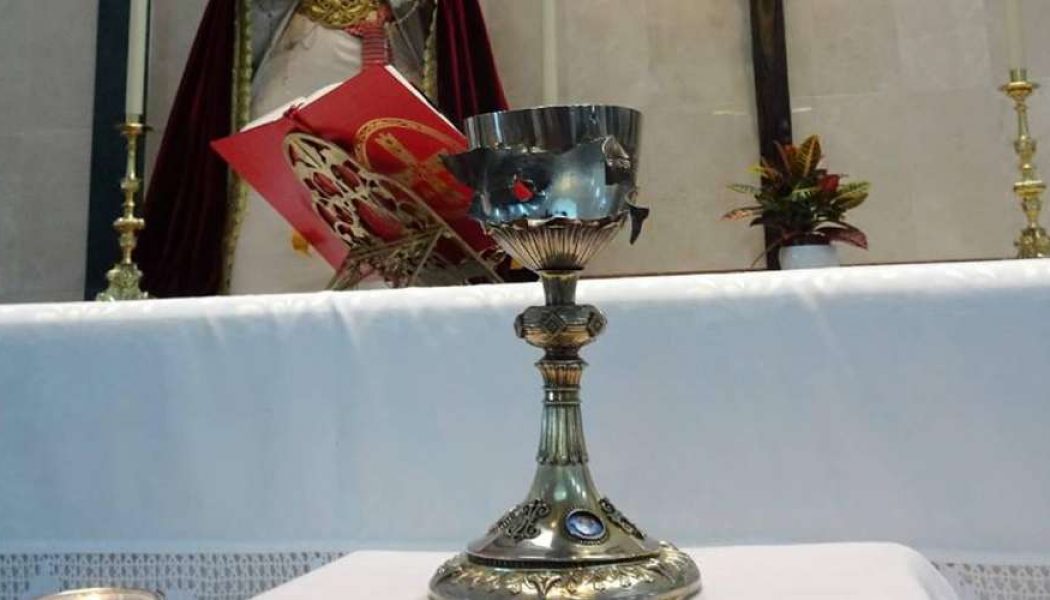 CNA Staff, Aug 28, 2020 / 06:11 pm MT (CNA).- As part of an effort to remember and pray for persecuted Christians, several churches in the Diocese of Málaga, Spain are displaying a chalice that was shot by the Islamic State.

The chalice was rescued from a Syrian Catholic church in the town of Qaraqosh on the Nineveh plain in Iraq. It was brought to the Malaga diocese by the papal charity Aid to the Church in Need (ACN) to be displayed during Masses offered for persecuted Christians.

“This chalice was used by the jihadists for target practice,” explained Ana María Aldea, an ACN delegate in Malaga. “What they did not imagine is that it would be re-consecrated and taken to many parts of the world to hold Mass in its presence.”

“With this, we want to make visible a reality that we sometimes see on television but we are not really aware of what we are seeing.”

The purpose of displaying the chalice during Mass, Aldea said, is “to make visible to the people of Malaga the religious persecution that many Christians suffer today, and that has existed since the early days of the Church.”

According to the diocese, the first Mass with this chalice took place August 23 in San Isidro Labrador and Santa María de la Cabeza parish in the town of Cártama.The chalice will be in the diocese until September 14.

“When you see this chalice with the bullet’s entrance and exit, that’s when you become aware of the persecution that Christians are suffering in these places,” Aldea said.

The Islamic State, also known as ISIS, invaded northern Iraq in 2014. Their forces expanded into the Nineveh plain, home to a number of Christian majority towns, forcing over 100,000 Christians to flee, mostly to neighboring Iraqi Kurdistan for safety. During their occupation, ISIS militants destroyed many Christian homes and businesses. Some churches were destroyed or severely damaged.

In 2016 the European Union, the United States and Great Britain declared the Islamic State’s targeting of Christians and other religious minorities to be a genocide.

ISIS was largely defeated and driven from its territory in Iraq, including Mosul and the towns of the Nineveh Plain, in 2017. A good number of Christians have returned to their devastated towns to rebuild, but many remain reluctant to go back due to the unstable security situation.

This article was originally published by our sister agency, ACI Prensa. It has been translated and adapted by CNA.