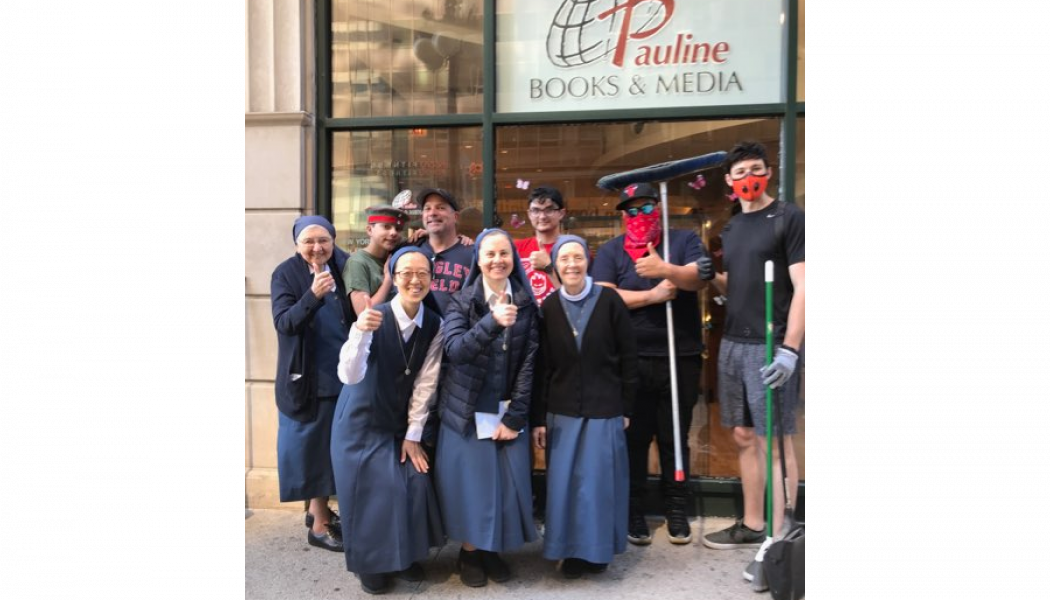 As the Daughters of St. Paul cleaned up the broken glass the next day, they said they saw more clearly their mission to evangelize a wounded culture.

Our Sisters in Chicago are all safe, but our bookcenter was broken into and looted last night during the riots.
Please pray for our Sisters.
And pray for peace. pic.twitter.com/Wzmkfpry6j

“How do you find your peace in the midst of all of that?” she asked, “and now what we’re dealing with is this question of violence and how do you deal with that?”

“All we can do is bring them Jesus and the Gospel, and His Word, and allow Him to speak to them. So what we’re trying to do is foster every person, every child of God, to know God as a good father who will provide,” Dugas said.

The Daughters of St. Paul run the Pauline bookstore in downtown Chicago near Millennium Park. It lies just south of the Magnificent Mile of upscale retail stores and fashion outlets, which were the targets of looters on Saturday evening. Video of the Saturday protests circulated online show looting of Nike and Saks Fifth Avenue stores on Michigan Avenue. Some volunteers helped clean the area up on Sunday.

Protesters took to the streets in Chicago and nationwide last weekend to protest the killing of George Floyd by a police officer in Minneapolis on May 25. Floyd was pinned to the ground with an officer’s knee on his neck for nearly nine minutes, and several other officers apparently kneeling on the rest of his body.

Demonstrations against Floyd’s killing and of police brutality were held around the country late last week and throughout the weekend. Chicago was the site of one of the large protests. Earlier on Saturday featured participants peacefully sitting down on Lake Shore Drive. According to the Chicago Tribune, protesters blocked traffic on the street around 5:30 p.m.

Around 10 p.m. on Saturday, Dugas said the nuns at the Michigan Ave. bookstore were informed that looters were targeting businesses in the area, and that a nearby building was on fire. The sisters remained upstairs above the bookstore, safely out of range of the street-level riots.

Around 11 p.m. the glass alarm for the bookstore sounded, Dugas said. The nuns knew that looters were hitting the glass, but they did not go down to the bookstore to investigate. More alarms sounded through the night, around every two hours, Dugas said, before the last alarm sounded at around 4:30 a.m.

“It was very scary, because each of those times we didn’t know if they were inside, and how far they wanted to get into the store,” Dugas told CNA.

While one of the Daughters of St. Paul tweeted on Sunday morning that she “bet people were really disappointed when they got home and found that all they had to show for it was a handful of religious books,” Dugas said she is unsure what, if any, books were actually taken. Of more concern to her was the chapel with the Blessed Sacrament on the ground floor behind the bookstore, which survived the night unscathed. “We just are really grateful for that,” Dugas said.

As tweets circulated about what happened to the bookstore, support began pouring in for the nuns both online and in the form of volunteer help.

“People are telling us what our ministry has meant to them, and what our presence means to them, and that they feel that having had this happen was a violation and should never happen to anyone,” Dugas said.

A friend at Chicago’s cathedral reached out to check on the nuns, and Bishop Robert Barron of Los Angeles—the former rector of the Chicago archdiocese’s Mundelein Seminary —reached out to the sisters to say “that he really, really has always valued our mission, and feels that if he can do anything to help us, to just let know” Dugas said.

One family helped the nuns clean the broken glass outside the store, and another group helped clean up inside. The front entrance and front windows are now boarded up.

On today’s NunBlog: Pauline Bookstore Chicago Looting Update and How You Can Help https://t.co/wRZ0zJqiA7 pic.twitter.com/AWFZd1G4SS

“Our main concern is fire. That’s our main concern, if they managed to get some kind of flammable into the store,” Dugas said. “It seems that they came with quite a lot of equipment.”

Despite the unsettling nature of the incident, Dugas said it emphasized the critical nature of the sisters’ mission of evangelizing in the spirit of St. Paul.

“That’s what St. Paul was all about, meeting them where they really are,” Dugas said, noting that the pandemic had already pushed the nuns to “adapt” to new means of reaching minds and hearts.

“We really are meant to be a family that helps each other, that serves one another, and that forgives,” she said.

Reseller hosting – your hosting expert. The suggestion of action you should take every day to constantly generate sales and income. Some of the best ways for generating real estate leads are through social media, blogging and seo.