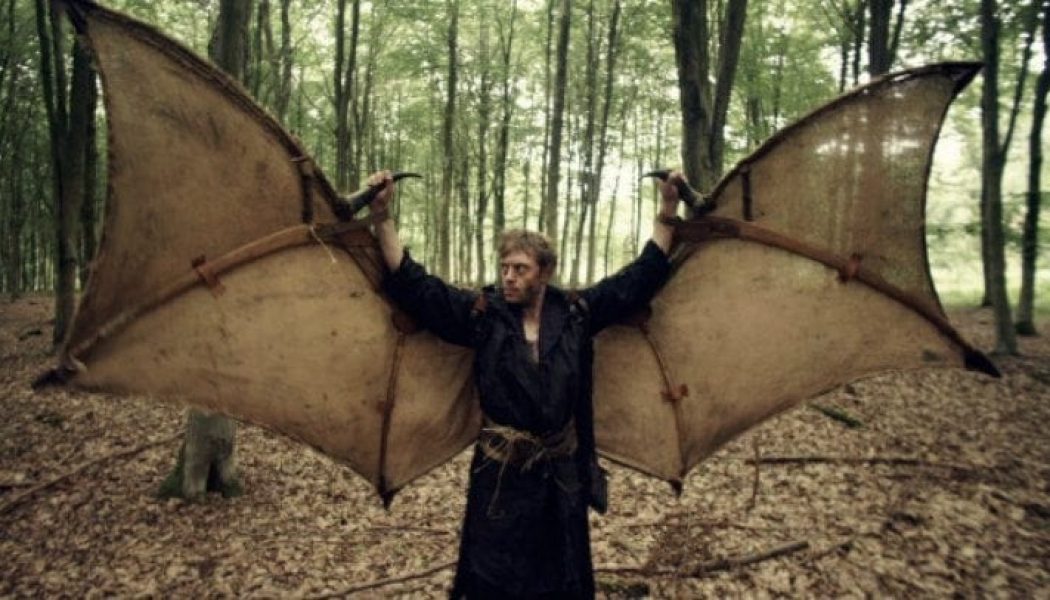 Readers of a certain age might remember the silly TV show The Flying Nun…religious brothers and sisters who take flight are nothing new.

When we lived in Wiltshire in England we learned the delightful story from the Middle Ages about Eilmer  a Benedictine monk of Malmesbury Abbey  who, in the eleventh century, jumped off the tower of the abbey church with some home made wings. Like Icarus he plummeted. The story is related by a monastic historian, William of Malmesbury:

He was a man learned for those times, of ripe old age, and in his early youth had hazarded a deed of remarkable boldness. He had by some means, I scarcely know what, fastened wings to his hands and feet so that, mistaking fable for truth, he might fly like Daedalus, and, collecting the breeze upon the summit of a tower, flew for more than a furlong [201 metres]. But agitated by the violence of the wind and the swirling of air, as well as by the awareness of his rash attempt, he fell, broke both his legs and was lame ever after. He used to relate as the cause of his failure, his forgetting to provide himself a tail.

The friar who really could fly was, of course St Joseph of Cupertino–the patron saint of pilots– whose memorial is today. To learn about his life go here.

Joseph was born into a poor family in Cupertino, Italy in 1603. His father was a poor carpenter who died before he was born, and his impoverished mother gave birth to him in a stable.

The poor boy started out with no advantages and his misfortune continued. To put it bluntly, he was stupid to the point of being unteachable. Everything he attempted he failed. His ecstasies began early in life and he would suddenly stop and stand and stare–totally distracted as if in a trance.

He got the idea that if he was good for nothing he might make it as a friar, but his lack of education meant the friars wouldn’t have him.  Finally he was accepted only to fail and be rejected and went wandering as a beggar. Eventually he returned and offered to be a servant at the friary and look after the mule. Somehow by God’s providence he made it through to ordination as a priest.

His ecstasies, visions and mystical experiences were legendary. He heard heavenly music, went into such a complete trance that he could be dragged about, pierced with needles and burnt with candles and it would have no effect. Most famously he is said to have levitated while in the trance state. Elaborate legends about him flying developed: he flew up into a tree to talk with birds, he flew up to help workmen place a memorial cross into the ground, he flew around the church during Mass.

Whaat??!! The doubters will scoff, “Tell me about it. What is this some sort of Peter Pan story? The saint could fly away to Neverland? Never.” Or they might laugh, “This sounds like Superman. Up, up and awaaaay!” The materialist will shake his head, “There is such a thing as gravity you know. People don’t levitate. It’s impossible.”

Well maybe or maybe not. We have take the more exaggerated stories of St Joseph’s flight with a pinch of salt. In the face of supernatural phenomena the church expects us to take a position that is neither gullible nor cynical. In other words, we must look first for every natural explanation, but on the other hand we must not rule out the possibility of miracles and the supernatural.

In today’s world Joseph of Cupertino would probably be regarded as severely mentally retarded. He was a misfit mystic. Quite apart from his mystical experiences his life of asceticism was so extreme that some people would say he had an eating disorder, that he was emotionally or mentally ill. During his lifetime he was accused of witchcraft and reported to the Inquisition.

Did he fly about the church or up into the trees? If so, what can we learn from this wonder?

The basis of these stories is that he probably did levitate.  Certainly levitation is not unknown as one of the aspects of mystical experience. This article discusses the paranormal phenomenon more completely. Levitation of objects and people has been associated with demonic and poltergeist activity and a good number of other saints were known to levitate: St Teresa of Avila, St Padre Pio, St Martin de Porres, St Francis, St Alphonsus Ligouri and the Russian Orthodox St Seraphim of Sarov.

The lesson we take from the life of St Joseph of Cupertino is that the mystical life unlocks the truth that this physical world is stranger and more unpredictable than we can imagine. Reality is rubbery. It is not a closed system. “There are more things in heaven and earth than our philosophy has dreamt of.” This post explains that Weird things happen. If the world is not as predictable as we thought and there is an open ended aspect to it, then prayer, the sacraments and all that we believe as Catholics regarding the supernatural are valid possibilities.

Secondly, we learn not to take life (and especially ourselves too seriously). G.K.Chesterton said “The angels can fly because they take themselves lightly.” The same can be said of St Joseph. He took himself lightly. He was humble therefore he was not heavy. He defied gravity because he was not grave. He levitated because of levity. I’m thinking of that scene in Mary Poppins where they visit Uncle Albert and float to the ceiling because they are laughing so much.

Thirdly, we learn once again through St Joseph of Cupertino that God uses the weak things of the world to confound the mighty. The foolishness of God is wiser than the wisdom of man. In worldly terms St Joseph of Cupertino was a fool, a failure and a flop. He was a nobody. He spent most of his life locked in a cell, moved from one religious house to another and suspected of being a fraud and even a witch. He made it to ordination by a mistake and seemed even as a priest to be useless.

God used his dedication and love. If he was mentally retarded or even mentally ill, God used that too. Did he fly? Most certainly.

Even if he had never levitated he flew. He was raised up because that’s the gospel principle: God raises up the lowly.