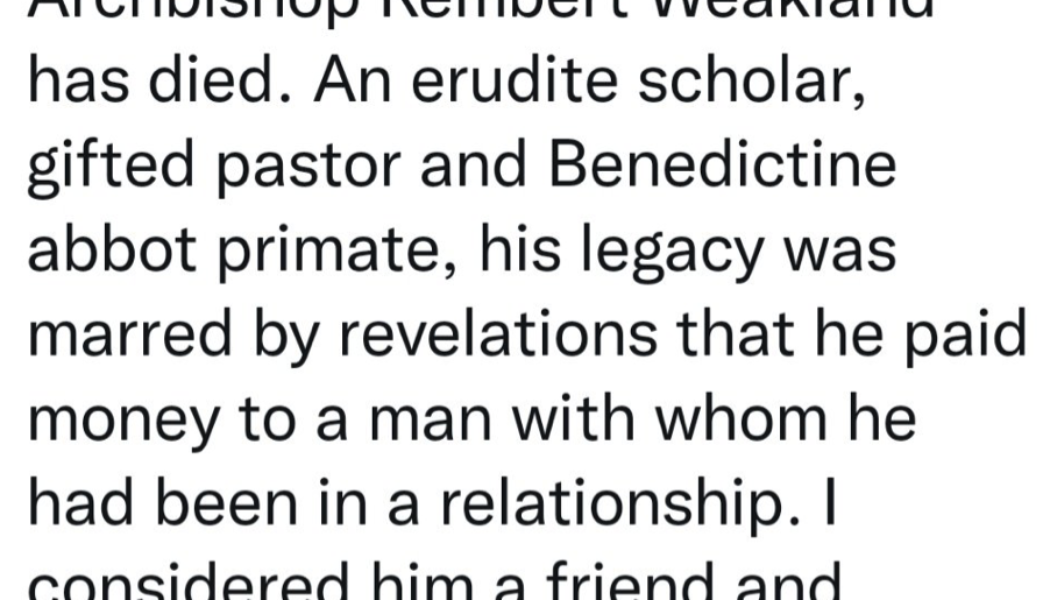 Writing obituaries about controversial — but to many people beloved — public figures is a difficult task that involves some complicated mathematics.

The death of former Catholic Archbishop Rembert Weakland of Milwaukee is a classic example and, here is the crucial point in this post, this was not a simple matter of “left” vs. “right.”

That said, there is no question that for decades — during the papacies of St. Pope John Paul II and Pope Benedict XVI — Weakland was a liberal Catholic superstar, with the word “liberal” in this case defined in political, cultural and doctrinal terms. But then there were revelations about his ethics and private life.

Thus, it was not surprising to see a double-decker New York Times headline with this kind of content:

In his long career, he was an intellectual touchstone for progressive Catholic reformers. But he resigned after the disclosure of a long-ago love affair.

In the 1980s and ’90s, Archbishop Weakland had been a thorny problem for the Vatican. Addressing issues that troubled many of America’s more than 60 million Catholics, he championed new roles for women; questioned church bans on abortion, birth control and divorce; and challenged the Vatican’s insistence on celibacy for an all-male priesthood.

He also became a leading critic of America’s economic and social policies during the administration of President Ronald Reagan, drafting a landmark 120-page pastoral letter on the economy that called for reordering the nation’s priorities to cut military spending and attack poverty and inequality.

However, let me stress that the Times placed that salute to Weakland AFTER a pretty solid, accurate look at his scandalous fall and other revelations that emerged about his behavior and decisions, for decades, during the Church of Rome’s hellish clergy sexual abuse crisis.

If you want to dig into the hard facts about Weakland’s role in that crisis, click here for crucial material — “Deposition of Archbishop Emeritus Rembert G. Weakland, O.S.B.” — by the independent Bishop Accountability organization. That is an organization that defied a simple “left” or “right” tag.

If you want to see what many would consider a “conservative” take on Weakland, see this post from canon lawyer and journalist J.D. Flynn at The Pillar. Here is the sobering second sentence: “Weakland is widely regarded as one of the most ignominious Churchmen in American Catholic history.”

Let’s move on. We will come back to the Times obit, looking at the mathematics of its overture.

But first, let me quote some material from the strong obituary in the archbishop’s local newspaper, the Milwaukee Journal Sentinel: “Former Milwaukee Archbishop Rembert Weakland dies at 95, leaves complex legacy.” Here is the opening:

Retired Milwaukee Archbishop Rembert G. Weakland, a once-towering figure in the American Catholic Church who spent his final years in virtual exile after a public fall from grace, has died. He was 95. …

Weakland served as Milwaukee archbishop for 25 years before stepping down in 2002 amid a scandal that involved paying hush money to a man who had accused him of sexual assault. Weakland had denied the allegations. He would come out as openly gay — possibly the first Catholic bishop to voluntarily do so — in his 2009 memoir “A Pilgrim in a Pilgrim Church.”

His resignation came as the public was beginning to grasp the scope of the church’s global crisis involving the sexual abuse of minors. Weakland, who protected abusive priests and at least initially treated complaints about them with disdain, came to be a face of the crisis in southeastern Wisconsin, a fate that would obscure his earlier accomplishments for the rest of his life.

That is a blunt, accurate summary.

At the same time, readers needed to know why this man soared so high in the church hierarchy.

What were the characteristics that led many Catholics and liberal activists to see him as a gifted leader in, let me stress this, a GLOBAL church that remains rootedin erudite corridors of European culture:

A Benedictine monk, Weakland was seen by many as brilliant; he spoke more than a half-dozen languages, and his ability to communicate with people from across the world facilitated his career advancement. He was an accomplished musician, having learned as a boy to play an old upright piano his grandmother had bought for his mother. He considered becoming a concert pianist, and studied in Europe and at the Juilliard School in New York. Throughout much of his life, he studied, played, taught, lectured or wrote about music. In 1999, he received his doctorate in musicology from Columbia University in New York. His dissertation was titled “The Office Antiphons of the Ambrosian Chant.”

As an archbishop he was a divisive figure. He was viewed as erudite or arrogant; an architect of progressive reform, or the embodiment of liberal excesses wrought by Vatican II; an unwitting accomplice in a flawed system that failed to grasp the enormity of child sex abuse, or a calculating criminal who placed his church above its victims.

In the wild world of Catholic cyberspace, many conservatives wanted to know if scribes in the mainstream press would be able to offer accurate, balanced takes on this powerful man’s life. That’s a fair question to ask.

However, in this case I think that most of the MSM obits — I stress, the ones that I saw — attempted to address the many Catholic voices debating this man’s life and legacy.

What about television reports? Did any national media even offer news reports about his death? I would argue that this story deserved coverage. Please let me know if I missed any national-level reports.

Let’s conclude by returning to the New York Times. What is missing from the early paragraphs?

While this obit quickly mentioned the archbishop’s personal scandal, I would argue that it needed — higher in the story — to mention the more crucial issue, which was Weakland’s decision to hide abusive priests from the faithful in their new parishes. Let’s walk through the top of this story:

Archbishop Rembert G. Weakland, a liberal critic of Vatican orthodoxy who led the Roman Catholic Archdiocese of Milwaukee for 25 years but resigned on the eve of retirement in a scandal over a long-secret love affair with a man, died on Monday at his home in Clement Manor, a retirement community in Greenfield, Wis. He was 95. His death was announced by the archdiocese.

An intellectual touchstone for progressive Catholic reformers, Archbishop Weakland, over the course of a distinguished if often controversial half-century career, was head of the worldwide order of Benedictine monks for a decade, presided in a rocky tenure over the Milwaukee archdiocese’s 700,000 Catholics, wrote many books and was an influential voice among the nation’s Catholic bishops.

But after an ecclesiastical life that lifted him from poverty in a Pennsylvania coal town to one step below the College of Cardinals — he was the recipient of more than 35 honorary degrees, international acclaim as a voice for change, and even talk that he might someday be the first American pope — Archbishop Weakland was disgraced in May 2002 as he reached the mandatory retirement age of 75.

A serious candidate to be “the first American pope”?

Dear friends: I've deleted my original tweets about the death of Archbishop Weakland, which did not address his cover up of abuse cases, which I condemn. I also apologize for asking for people to consider whether their friends had ever sinned, which seemed like equating…

Dear friends: I’ve deleted my original tweets about the death of Archbishop Weakland, which did not address his cover up of abuse cases, which I condemn. I also apologize for asking for people to consider whether their friends had ever sinned, which seemed like equating…

That language will cause many Catholic readers to gag. However, that does show the level of this man’s celebrity for some on the cultural and political left.

Let’s keep reading. Remember that, from my point of view, the most important issue is Weakland’s role in the sexual-abuse crisis, in terms of his actions that affected the believers under his care.

Paul J. Marcoux, a former theology student who had been his lover more than 20 years earlier, told an interviewer on the ABC program “Good Morning America” that he had received $450,000 from the Milwaukee archdiocese in 1998 in a pretrial settlement of a lawsuit over what he called date rape at the hands of the archbishop long ago.

The archbishop, whose resignation was accepted a day later by the Vatican, denied that he had committed sexual assault. But, apologizing to his archdiocese, he admitted that he had used church funds to pay what he called hush money when Mr. Marcoux threatened to file suit and expose an affair that took place in the early 1980s. He said that he had written an emotional, self-incriminating letter to Mr. Marcoux, breaking off the affair, and that his lawyers regarded Mr. Marcoux’s threats as blackmail.

In a 2009 interview with The New York Times, Archbishop Weakland said he had been aware of his homosexuality as a teenager and had suppressed it until he became an archbishop, after which he had relationships with several men.

Finally (from my point of view), there is this paragraph that was placed nearly 400 words into this obit:

In a nation reeling from disclosures that thousands of children had been sexually abused by Catholic priests, he also acknowledged that he had allowed sexually abusive priests to continue working without informing parishioners of their histories. He blamed psychologists who advised him that abusive priests could be treated and returned to work; he also blamed Vatican courts for taking years to remove abusers from the priesthood.

In terms of sins, and crimes, what is the most crucial fact in the career of Archbishop Weakland?

Times editors may see the painful scandal (yes, involving church money) in the personal life of this long closeted gay Catholic as the crucial issue, or perhaps the one that would most move their readers. But I think the most important issue was clearly Weakland’s history of hiring abusers at altars.

Writing obits for this liberal archbishop was, obviously, a challenge. But I think the “lede” is clear.