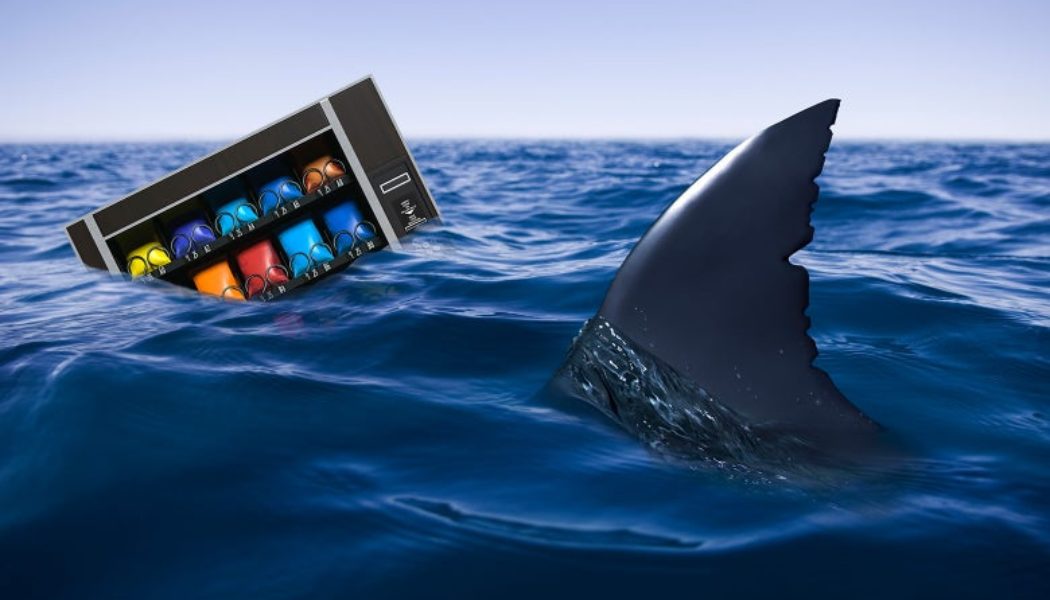 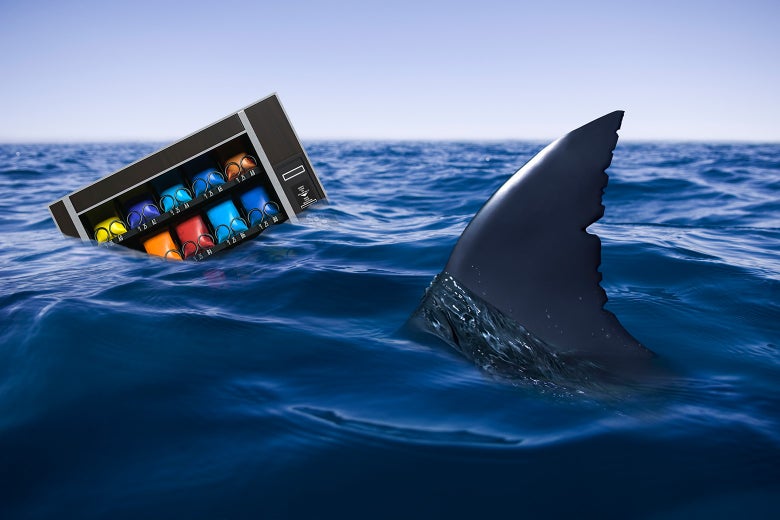 Throughout the years, I’ve accumulated a few fun facts about sharks. They can detect electric fields. Their skeletons are composed not of bones but cartilage and connective tissue. Their fins are inhumanely harvested for shark fin soup.

But the fact that lives rent-free in my mind is this one: Each year, more people are killed by vending machines than sharks. I’ve heard it from friends and experts alike. It’s even been cited in National Geographic and the Guardian.This fact has a clear purpose: It demonstrates that sharks are not as deadly as Jaws suggests—that really, you shouldn’t be afraid of sharks at all.

It’s also a very specific statistic, and kind of a weird one, if you really think about it. Sure, maybe sharks don’t kill very many people, and do not deserve their blood-thirsty reputation. But they are still at least capable of inflicting harm if provoked; after all, shark sightings can lead to a beach closure. And how often do vending machines cause … death? In honor of Shark Week, I decided to investigate.

One of the first questions I had was: What exactly classifies a vending machine death? Does the person press a button, hoping for a bag of potato chips, but somehow gets an electric shock instead? Is it that the contents of the vending machine are so expired that they poison the consumer?

It’s actually none of the above. Based on a 1995 U.S. report from Consumer Product Safety Commission, vending machine injuries arise from users rocking or tilting the machine. There are some gruesome stories from the ’90s about vending machines killing people in this way. (Shark attack deaths, on the other hand, are a bit more self-explanatory: They’re any shark-related fatalities.)

With that clarification out of the way, I called a couple of shark experts to get their read on the sharks–vs.–vending machine situation. “The funny examples—not that there’s anything funny about a death—that make you tilt your head and think ‘really?’ seem to be very effective at catching people’s attention,” explained David Shiffman, a faculty research associate at Arizona State University studying shark conservation. “People think these sharks as being monstrous and if you dip your toe in a bathtub of sharks it’s going to eat your whole family.” A silly statistic about a vending machine illustrates that, while sharks can kill, seemingly anything can kill you under the exact right circumstances.

Toby Daly-Engel, the director of the Shark Conservation Lab at the Florida Institute of Technology, says she often cites the vending machine–vs.–sharks statistic in her talks. Daly-Engel thought that she first heard about the vending machine–vs.–shark comparison from the International Shark Attack File, which markets itself as “the world’s only scientifically documented, comprehensive database of all known shark attacks,” a description checked out with Daly-Engel. “They’ve been keeping track of attacks since people have been keeping track,” she notes.

Indeed, the database had the goods on shark-related deaths. According to it, there were nine reported fatalities globally in 2021. The estimated chance that one will die by shark in their lifetime is 1 in 4,332,817 (a footnote describes that lifetime risk is calculated by dividing the 2021 population by the number of deaths, divided by 76.6, the life expectancy of a person born in 2021). So: very, very, very, (very, very!) small.

The database does offer some funny shark comparisons, such as how shark attack frequency compares with that of being bitten by a New Yorker (1,587 people were bitten by New Yorkers in 1987, which is much higher than the 13 shark bites reported that year). However, there is no mention (that I could find) of vending machine attacks. International Shark Attack File did not respond to Slate’s request for comment.

So, I set out on my own to find data on vending machine deaths. Most searches brought me back to that 1995 CPSC report. In that year, the commission “received reports of at least two consumers who died and one who was severely injured after the soda machines they were rocking fell on them,” explains the report, which looks only at instances in the U.S. The report explains that vending machines had indeed been a low-key menace for a while. “CPSC is aware of at least 37 deaths and 113 injuries since 1978 that have resulted from consumers rocking or tilting the machines in an attempt to obtain free soda or money.”

That’s just over two vending machine deaths per year. Compare that with the number of national shark deaths in 2021—just one. The International Shark Attack File didn’t have public data on fatalities in the U.S. in the 1980s, making a straight apples-to-apples comparison difficult. But looking at those two numbers alone, it seems that, even if there are a slightly different number of deaths each year, the vending machine stat could be basically true.

But there’s still one big question: The vending machine data is older than I am. Are vending machines still killing people at that rate? I reached out to the CPSC to see if there were any updated statistics. According to the agency’s press secretary, Patty Davis, there hasn’t been a reported vending machine death since 2008, “when a 51-year-old male died of a pulmonary embolism after a vending machine fell on his foot.”

(Davis did say that from 2008 to 2021 there were an estimated 36,600 hospital emergency department visits which were associated with—though not necessarily caused by—vending machines. However, looking at the National Electronic Injury Surveillance System Query search, which contains the hospital records maintained by the CPSC, it seems that “slot machines” and “gumball machines” both fall under the umbrella of “vending machines,” so it’s likely that not all of these are truly vending machine related injuries. In fact, looking at some of the cases in the past 10 years, many consist of individuals falling off their seats while using a slot machine. While we’re here: A vending machine technically killed someone in 2015. According to a BuzzFeed report, a man tried to blow up a condom machine, and a piece of blown-off metal hit him. This does not really seem like the machine’s fault.)

I wanted to know why vending machine deaths have basically decreased to a halt in recent years, but sadly no vending machine companies were able to answer my question before this post published. But if I were to guess, it might have something to do with a campaign to introduce warning signage in 1995, urging consumers to refrain from tipping the machines. Also, according to a blog post from the Vending Group, the mid-2000s saw the introduction of credit card readers on machines in order to sell higher-priced goods. With less chance of having their money eaten by the machines, snack-wanters have less reason to jiggle them in the first place.

A couple caveats to all of this: It’s possible that there are deaths that are going unrecorded in the data, particularly vending machine deaths. And your chance of death-by-vending machine vs. death-by-shark really varies depending on where you are, as a 2017 episode of the YouTube show Today I Found Out points out. Someone in a more rural area who hates the sea will definitely not be killed by a shark. On the other hand, those who are regular beachgoers have a higher likelihood of encountering a shark (though odds are still very, very, very low, to the point of being almost zero). And if you’re someone with a particular vengeance against vending machines, which we have now established as mostly gentle giants—you should be aware of the fact that they are still capable of inflicting deadly force.

Overall, it seems like the oft-repeated comparison is sadly not quite accurate nowadays: In 2022, you are more likely to be killed by a shark than a vending machine. “I think a lot of the comparisons—someone invented them and they got passed around by word of mouth,” Daly-Engel said. “Even among shark biologists, we all have our favorite facts we whip out for talks because it’s an important thing to talk about.” In addition to the vending machine comparison, she likes to share that people are more likely to die on the toilet (vagus nerve compression can lead to a heart attack), by Christmas tree (probably by house fire), or through autoerotic asphyxiation (this one is pretty self-explanatory). Fact-checking each of these to ensure they’re current would be a whole other piece—but you get the message. Sharks aren’t really killers.As for the vending machine comparison, Shiffman has his own version: “I don’t know anyone who has been badly hurt by a shark but I do know someone who was badly hurt by a vending machine,” he says. “It was about 10 years ago, they were pissed off the machine took their money, and they shook it and it fell on them.”