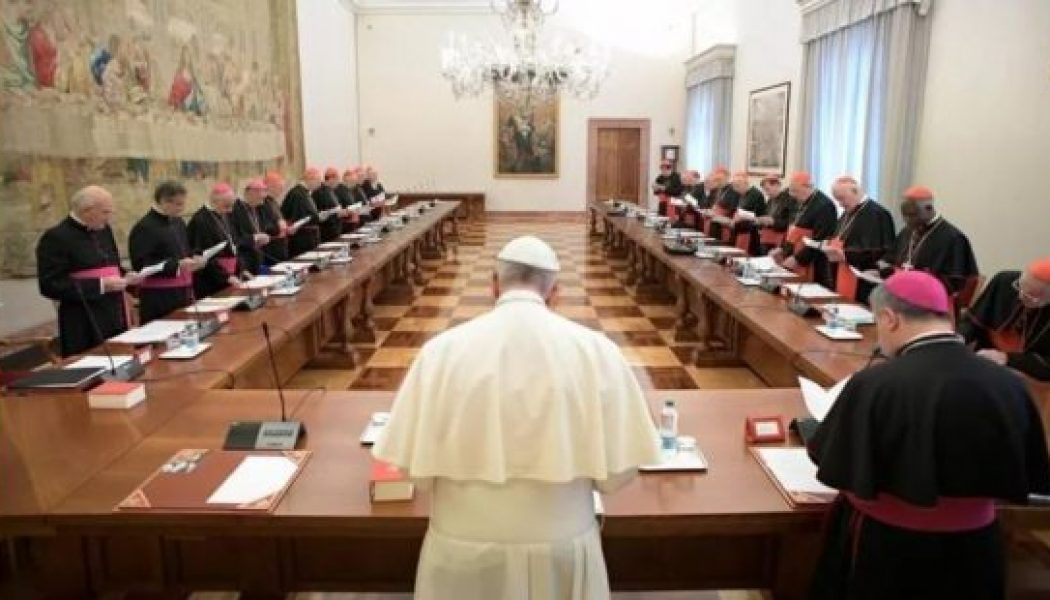 ROME – According to an internal Vatican analysis recently presented to Pope Francis for a meeting with his department heads, declines in revenue due to the coronavirus pandemic will cause the Vatican’s annual deficit to balloon somewhere between 30 and 175 percent, depending on which of three scenarios, ranging from best to worst case, is realized.

Under the worst-case scenario, which assumes shortfalls between 50 and 80 percent and only limited success at containing costs, the 2020 deficit would be 146 million Euro, or $158 million. For a sense of scale, the total projected income for the year is $160 million, which means the Vatican would be spending twice as much as it brings in.

As a footnote, something many observers have said for a long time is worth repeating: In the grand scheme of things, $158 million just isn’t that much money, especially when you put it in the context of other major Catholic entities. The University of Notre Dame in the States, for example, has an annual budget of $1.3 billion. The fact that such a comparatively modest sum could trigger an existential crisis is one measure of how much the Vatican’s financial operation needs aggiornamento, meaning “updating.”

According to a report in the Roman newspaper Il Messaggero, as an initial response to the shortfalls Pope Francis has been advised to order department heads to cut corners, freeze hiring, and avoid travel and conferences. Such measures won’t solve the problem, but they would help slow the bleeding.

There’s little surprising about any of this.

It’s often assumed that the Vatican is losing money because its museums and other public attractions are closed, but in reality that’s a blow to the Vatican City State rather than the Holy See or the Roman Curia, meaning the Church’s central government. In terms of the Holy See, its main sources of income are investments, which are suffering due to market declines; earnings from real estate holdings, which are down because of market slumps; and contributions from Catholic dioceses, which will be lower as their own resources contract.

Proceeds from the annual “Peter’s Pence” collection, which has been delayed until Oct. 4, almost certainly will fall too, in part because people simply have less money to give, and in part because of the fund’s association with a recent scandal involving a $225 million land deal in London. Technically Peter’s Pence is not part of the Vatican’s balance sheets, though income has been used for years to offset the Vatican’s annual deficit.

In fact, the situation may be even worse than the “worst case” scenario suggests.

Projections in the internal analysis presume just modest drop-offs in the Peters Pence contribution to the Vatican, and only time will tell if that’s wishful thinking.

What’s also not addressed is the possible impact of the next review by Moneyval, the Council of Europe’s anti-money laundering watchdog, scheduled for this spring but delayed. On background, observers say Moneyval was alarmed by the abrupt departure in November of the Vatican’s own anti-money laundering guru, Swiss lawyer René Brülhart, and should it place the Vatican on a “blacklist,” the Holy See could be frozen out of international markets or face significantly higher transaction costs.

Ironically, this crisis actually may help the pope’s attempts at reform. Change now is inevitable, no matter what sort of resistance the fabled “old guard” may put up, because the Vatican finds itself looking down the barrel of a $158 million gun.

Devil in the details

Yet the devil is always in the details, so the question is what sort of reform. In that regard, two points are of special interest in the analysis submitted by the Secretariat for the Economy.

The first involves investments. The analysis recommends that Pope Francis direct heads of Vatican dicasteries (the technical term for a department) to move their liquid assets currently in other financial institutions to the Administration of the Patrimony of the Holy See (APSA), sometimes dubbed the Vatican’s “central bank.” Also under consideration is directing dicasteries to move assets to APSA currently deposited in the Institute for the Works of Religion, the so-called “Vatican bank.”

A sign designating the Administration of the Patrimony of the Apostolic See, the Vatican’s “central bank.” (Credit: Stock image.)

The reasons for doing so, presumably, would be two-fold.

First, APSA is responsible for the Vatican’s payroll, and since almost half of its expenditures go to personnel – not just salaries, but also pension contributions – the idea is to direct assets to the area of greatest immediate need.

Second, by concentrating those assets in one place, a more rational and profitable investment plan for assets not required for day-to-day operations could be fashioned. One large investor is in a better position to negotiate returns than several smaller players acting on their own.

In this regard, the internal analysis recommends the creation of a “single center of specialized service, where the financial resources available for investment of all entities would converge.”

In other words, it’s talking about something like the “Vatican Asset Management” office proposed by Australian Cardinal George Pell in the summer of 2014, at the peak of his Vatican influence and before he faced the charges of sexual abuse which Australia’s High Court ultimately dismissed.

Here’s how Pell described the idea in a July 2014 interview with me for the Boston Globe: “Over time, the asset management office will come to manage the Vatican’s reserves, meaning monies not needed for day-to-day operations … The ambition is that by putting the various funds together, we’ll have a bigger base sum and be able to get a better return.”

The idea was dropped as Pell’s Vatican star began to dim, but it’s apparently getting a new lease on life. (As an aside, one can only imagine the satisfaction Pell may feel at seeing himself vindicated not only on the abuse charges but his financial analysis.)

The key question, however, is who would control this new fund.

The most likely candidate would be APSA, but it has a troubled history. Its former president, Italian Cardinal Domenico Calcagno, faced accusations of misappropriation during his time as the bishop of Savona. Early in Francis’s papacy, a longtime accountant at APSA, Monsignor Nunzio Scarano, was arrested by Italian authorities for participating in a financial scheme worthy of a James Bond novel.

In general, APSA long has had a reputation as the most opaque of the Vatican’s financial centers. In 2018, the Vatican bank issued an annual report independently audited by Deloitte, one of the world’s “big four” accounting firms, which ran to 139 pages. APSA issues no annual report, and even the skeletal annual Vatican report, which used to provide some basic numbers, hasn’t been issued since 2015.

Pope Francis tapped his own man to take over at APSA, Bishop Nunzio Galantino, in June 2018, who has a reputation for personal integrity. Yet the extent to which he appreciates the depth of the challenges is an open question; last year, Galantino dismissed talk of financial difficulties at the Vatican, telling reporters “there’s no ‘crack’ or default here.”

Even then, before the coronavirus, the Vatican was still running an annual deficit of around $55 million and faced mounting unfunded pension liabilities.

As a result, whom the pope chooses to put in charge of a new investment center, and what sort of team that person assembles, will go a long way towards indicating whether the inevitable restructuring is also real reform.

“There’s a need to ensure flexibility in the salary system in order to be able to reward competence and merit, and to be able to face critical periods like the present with adequate instruments,” the internal analysis says.

“At the same time, greater opportunities must be furnished to personnel, ensuring standardized formational programs and a professional mobility that allows each employee (beginning with managers and leaders of the offices) to understand and learn different tasks, within the limits of their own competencies, and to assume different responsibilities in the arc of time.”

Then, a rather surprising coda to the thought: “A structural reform would be desirable,” the report says, “but the actual circumstances don’t seem favorable.”

To decode all that, it’s a diplomatic way of making two points Vatican insiders have known for a long time.

First, the Vatican has a bloated payroll relative to its resources. It can’t sustain those expenditures, not only because of salaries (which are relatively low) but pension obligations. Most observers think it needs to trim about a third of its current workforce.

Second, if that happens, remaining employees will have to be nimbler and able to work outside their present silos, perhaps working for a variety of entities where they have particular skills. That means a serious investment in professional formation.

Though it’s been largely forgotten amid the coronavirus, it was only two months ago that one of the more curious PR reversals in Vatican history unfolded: On a Friday, the Vatican Press Office announced the creation of a new human resources office within the Secretariat of State. Yet the very next day, the Press Office said the office is actually just an idea, and the pope will decide in his own good time what to do.

There were various theories to explain the flip-flop – which may help account for the internal analysis’s otherwise odd assertion that “current circumstances” don’t favor structural reform – but the fact remains that a meaningful HR operation is a make-or-break component of serious reform.

There, too, the question will be who’s put in charge and what sort of team they’re able to assemble.

Finally, on the “actual circumstances” impeding structural reform: The raw reality is, Pope Francis doesn’t want to fire people, particularly lower-level Vatican officials and manual laborers. Especially now, the situation of families without work due to the coronavirus weighs on him, and he’d vastly prefer to trim payroll through retirement and attrition rather than direct action. That may be merciful, but it’s also frustrating for bean counters looking at a mismatch between income and expenses.

One of the “sanpietrini,” meaning laborers within the Vatican’s Basilica of St. Peter. (Credit: Paul Haring/CNS.)

Bottom line: Like any company, or any family, facing deep and mounting debt, the Vatican can’t go on like it has. Change is coming. The drama pivots on what sort of change it will be – and on that front, and with apologies for the Econ 101 pun, demand for answers at the moment significantly exceeds supply.