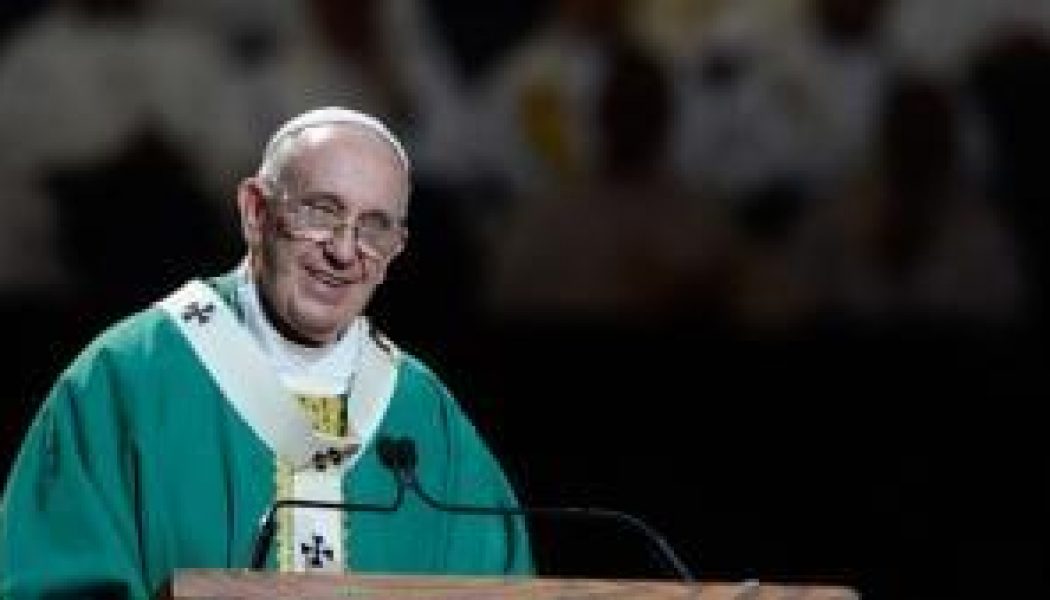 Recently, Pope Francis answered questions from high school students and suggested they convert non-Catholics through their authenticity and example. In so explaining, he suggested they don’t push their faith on unbelieving students. This is generally a good, practical strategy. Unfortunately, some misread what he said. They read it just as not doing the latter without seeing the former. I want to point out what Francis said, then explain two points: practical evangelization and “proselytism.”

On Friday, December 20, Pope Francis visited Pilo Albertelli high school and took students’ questions. The Vatican only has the text in Italian, so I will give an annotated English translation:

[Two students ask similar questions:]
[1.] Hello, Holy Father, I wanted to ask you, when you taught, what looks, what gestures, what thoughts you had towards people of other religious beliefs, also?
[2.] Good morning, Your Holiness, I wanted to ask you a question. If an atheist came to you and asked you a fundamental reason to start believing what would you answer?
[Pope Francis Answers:]
[He begins describing how he lived in school in Argentina, then he notes,] This kid was Muslim, that kid was Jewish… but we all played soccer together, we were all friends. This has taught me so much, that we are all the same, all children of God and this [comradery] purifies your gaze, it makes you human. […] You must be consistent with your faith. It didn’t occur to me and it doesn’t have to be like saying to a boy or a girl: “You are Jewish, you are Muslim: come over here, get converted!” You should be consistent with your faith and that consistency is what will make you mature. [A mature Christian as he has said before, is one whoa ttracts others to Jesus. Thus, consistency in faith is a way of sharing the Gospel.]

We are not in the times of the crusades. It was a bad thing… when the Christians, the crusaders had defeated the Muslims [in battle] and then formed a queue of all the Muslims. The priest was in front of it with a soldier. The priest in front of the baptismal font and when everyone came, he asked: “Either the baptism or the sword.” This has happened in history! They also do it with us Christians in other parts, they are also doing it but what happened to us “shame” (shame) because it is a story of forced conversion, of not respecting the dignity of the person. This is why my experience was natural with people of other religions because my dad my dad’s job was an accountant and he had so many Jewish business clients and they came home, it was normal and I didn’t see this as a problem. But it must be normal. Nothing to leave them aside because they have another faith. And you. Damiano [one of thsoe who asked questions above], what word would he use to convince someone to become a Christian?

[Pope Francis replied with a paragraph that is controversial due to misunderstandings:]

The first is all. In front of an unbeliever, the final thing I have to do is try to convince him. Not Now. The final thing I have to do is speak. [A literal translation is “never” rather than “not now.” However, contextually in colloquial Italian this is a hyperbole and thus understanding telling other people why they should beleive as the final step not the first one is his point. Francis wants to end with convinceing the unbeliever, not begin there.] I have to live consistent with my faith. And it will be my testimony to awaken the curiosity of the other who says: “But why do you do this?”. And yes I can speak there. But listen, never, never bring the gospel with proselytism. [Proselytism has a very different conotation in Spanish, in Italian, or in ecclesial context than its standard English meaning – see below.] If someone says you are a disciple of Jesus and comes to you with proselytism, this is not a disciple of Jesus. Proselytism is not done, the Church does not grow by proselytism. Pope Benedict had said it, it grows by attraction, by testimony. Football teams do proselytism, this can be done, political parties can be done there but with faith no proselytism. And if someone says to me: “But why you?”. Read, read, read the Gospel, this is my faith. But without pressure.

The Practical Advantages of Witness Evangelizing

The Early Church had people converted by preachers but it also had those who were converted by the witness of Christians. The Romans would say, “See how they love each other.” At different times, these two have worked together in different ways to bring others to the faith. If we look at the modern world, so many who leave the faith claim a poor witness of Christians, not necessarily the dislike of Christian doctrine. Many have left after the sex abuse crisis because of the anti-example it provides. Many are moved by the example of people like Mother Theresa. We also have to realize that even those convince partially with arguments or preaching are also dependent on the one giving the argument or piquing their interest to be consistently Christian.

Also, we have to look at the context. Pope Francis is speaking about a fellow student who is an atheist. In a similar situation, think of two coworkers: one spends lunch hour preaching to you and your coworkers, and another does simple things like prays before meals but you also see joy and authenticity in him. Most of us will tune out the former. On the other hand, you would likely ask the latter about their life, which would include their faith.

This is also what the Holy See Press Secretary said about this meeting:

“In addressing non-believers, [Pope Francis] emphasized the value of witness to awaken curiosity about the Gospel and faith,” said Matteo Bruni, the Holy See Press Secretary.

One issue I think many readers miss is that to convert and to proselytize are two different actions. Unfortunately, in Merriam-Webster, the first definition of “proselytize” is to lead someone to convert.

Pope Francis, and others in the Church, generally mean a specific form of leading someone to convert by “proselytize.” Proselytism is a particularly forceful and unscrupulous method of pushing someone into conversion. A 2007 Vatican document clarified what was meant by “proselytism” in a negative sense:

Also, the term has much more of the negative sense Francis gives it in Spanish and Italian, which are his two primary languages. English makes evangelization and proselytism almost synonyms, but this not so in other languages.

In recent years, the Church has emphasized evangelization by drawing people to the beauty of Christian life, by example, by charity. This goes back to at least Paul VI.

Paul VI said, “Modern man listens more willingly to witnesses than to teachers, and if he does listen to teachers, it is because they are witnesses.”

For all Christians, wherever they live, are bound to show forth, by the example of their lives and by the witness of the word, that new man put on at baptism and that power of the Holy Spirit by which they have been strengthened at Conformation. Thus other men, observing their good works, can glorify the Father (cf. Matt. ES:16) and can perceive more fully the real meaning of human life and the universal bond of the community of mankind.

An extremely important aspect of your role is that you are called to lead the young to Christ, to inspire them to follow him, to show them his boundless love and concern for them, through the example of your own life. Through you, as through a clear window on a sunny day, students must come to see and know the richness and the joy of a life lived in accordance with his teaching, in response to his challenging demands.

The Church does not engage in proselytism. Instead, she grows by “attraction”: just as Christ “draws all to himself” by the power of his love, culminating in the sacrifice of the Cross, so the Church fulfils her mission to the extent that, in union with Christ, she accomplishes every one of her works in spiritual and practical imitation of the love of her Lord.

I’m sure there are plenty of other examples. Those were just some of the first that came up. [This whole section was copied almost verbatim from an earlier article I wrote on a similar theme.]

Note: Please support me on Patreon or give me a one-time Christmas gift so I can keep writing like this.