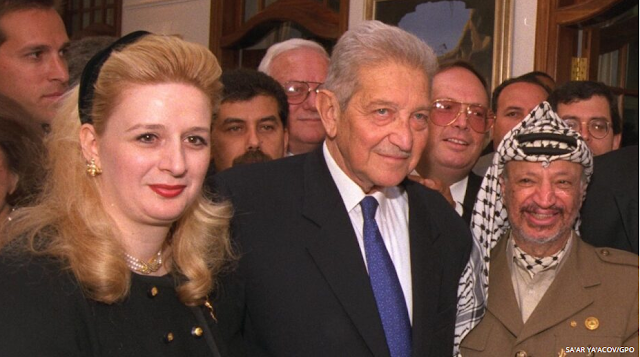 Speaking to Israeli media, Arafat’s widow says she knows secrets that could bring down the Palestinian Authority

The Palestinian Authority is finding itself increasingly isolated in its fierce opposition to the announced normalization between Israel and the United Arab Emirates. Only Iran and Turkey have joined the Palestinians in loudly opposing this move toward peace.
In fact, even the widow of none other than Yasser Arafat, the man who made a career of trying to destroy Israel, has publicly accepted this dramatic development or at least is telling other Palestinians to stop opposing it.
After fellow Palestinians reacted to the news by publicly burning UAE flags and pictures of Crown Prince Mohammed bin Zayed, Suha Arafat took to Instagram to apologize to the Emiratis and their leader:
“I want to apologize, in the name of the honorable Palestinian people, to the Emirati people and their leadership for the desecration and burning of the UAE flag in Jerusalem and Palestine and for insulting the symbols of the beloved UAE country. These is not our morals, nor our customs, nor our traditions. The difference in opinion does not spoil the friendship. I tell our people to read history well to know how the UAE, past, and present, supported the Palestinian people and the cause. I apologize to the people and leadership of the Emirates for any harm done by any Palestinian to this generous and kind people who have always welcomed us.”
Now she’s under fire from Palestinians who see her, too, as a “traitor.”
“There are instructions to turn me into a traitor and these instructions come from the head of the president’s office,” Suha said in an interview last week with Israel’s Kan TV news.
She said the man who is after her is PA President Mahmoud Abbas’s private secretary Intisar Abu Amara, who Suha revealed is quietly controlling the Palestinian Authority behind the scenes.
Arafat’s widow went on to criticize the Palestinian Authority under its current leadership for falling into the trap of opposing the UAE peace deal as if the Palestinians don’t also cooperate with Israel.
“If Yasser Arafat were alive he’d go to Mohammed bin Zayed and [appeal for help in dealing with] Netanyahu,” she explained. “But to go and say an Arab country is a betrayer? Enough with the slogans. We collaborate with Israel, with the Shin Bet, and Mossad. Who are you kidding?”
Suha concluded the interview with Israeli media by threatening to expose deep, dark secrets about the current Palestinian leadership if they don’t back down in their attacks on her.

That there are secrets dark enough to bring down the Palestinian Authority if exposed to its citizens should raise some pretty big red flags for anyone trying to birth a sovereign Palestinian state under that leadership.
The idea of the Israeli-Palestinian peace process is that the Palestinian state it establishes should not only live in peace with Israel but be fully democratic and wholly self-sufficient. A true partner for a better future. If it’s going to end up being a hopelessly corrupt haven for armed gangs that’s entirely dependent on the goodwill of Israel and Jordan to stay afloat, then what’s the point?

Suha Arafat’s rare outspokenness on this issue also reveals the deep concern of Palestinians who are able to look past the propaganda and understand the risk posed by insulting the rich Gulf states.
The UAE in particular does not take kindly to criticism of its leaders.
Israel’s N12 news portal reported that Saudi Arabia had privately warned the Palestinian Authority to restrain its reactions, especially rallies atop the Temple Mount decrying the Israel-UAE deal. Burning UAE flags and referring to the Emirates as “traitors” could do irreparable damage to the Palestinian cause, said the Saudis.
Jordan is said to have issued a similar warning over concern that the Palestinian rallies could be seen as a threat against any Emiratis who take advantage of the new peace with Israel to visit the Temple Mount, which Jordan officially oversees.
But from the Muslim Brotherhood to Saddam Hussein to Iran, the Palestinians have a history of backing the wrong horse and putting themselves on the outs with the rest of the moderate Arab world.
It’s no surprise that they are doing the same thing now.

Expert hosting reviews and advice. Because omnicommissions lets you start profiting out of thin air. It can be rented out to various companies for their offices, stores, and other commercial activities.