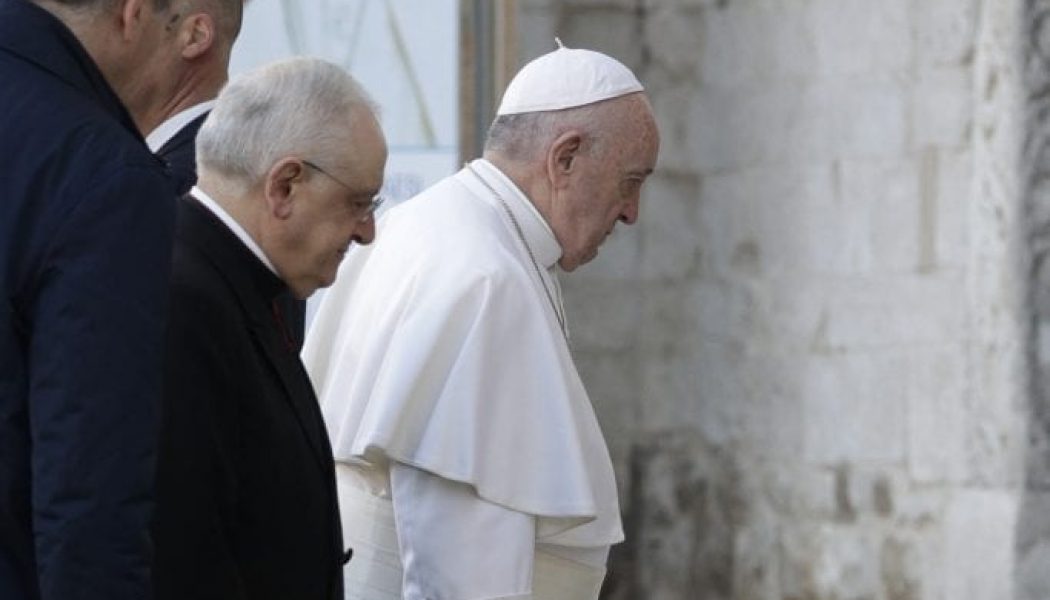 ROME – Say “Christianity” and “Middle East” to people who’ve been paying attention to events in the region, the and next word that would automatically come to mind for most probably would be “extinction.”

By now, the statistics on the collapse of the Christian population in the Middle East are wearily familiar. The situation is worse in the war-torn nations of Iraq and Syria, for obvious reasons, than in historic Christian strongholds such as Egypt and Lebanon, but there too the pressures are strong and the trendlines alarming.

Though there are promising pockets of resilience, such as the effort by Christians on Iraq’s Nineveh Plains to rebuild villages all but wiped out under ISIS occupation, most observers agree that the rise of anti-Christian violence fueled by jihadist intolerance has rendered the Christian future deeply uncertain.

As it happens, Pope Francis last Sunday traveled to the Italian coastal city of Bari for a meeting of Mediterranean bishops organized by the Italian bishops’ conference, at which all the Catholic patriarchs and other Church leaders from the Middle East were present. One might have expected the pontiff to use the occasion to issue a passionate cri de coeur in defense of a local church representing the historic roots of the faith, and which is presently fighting for its life.

In the event, that’s not quite what happened.

The pope referred directly to the trauma of Middle East Christians just once: “For our part, brothers, let us speak out to demand that government leaders protect minorities and religious freedom. The persecution experienced above all – but not only – by Christian communities is a heart-rending fact that cannot leave us indifferent.”

The lion’s share of the pope’s attention instead was devoted to the fate of migrants and refugees attempting to cross the Mediterranean to reach Europe and the West, so many of whom have died in the effort that the sea has come to be known as a vast watery graveyard.

“To be sure, acceptance and a dignified integration are stages in a process that is not easy. Yet it is unthinkable that we can address the problem by putting up walls,” Francis insisted, in familiar language from this pope.

On this front Francis was forceful and direct, even tossing dawn to the gauntlet in front of today’s populist champions by comparing them to the Nazis.

“I grow fearful when I hear certain speeches by some leaders of the new forms of populism; it reminds me of speeches that disseminated fear and hatred back in the thirties of the last century,” he said.

In the abstract, it may seem jarring that Pope Francis didn’t focus more on the suffering of the members of his own flock. Three points, however, may help explain the discretion.

First, it’s important to note that his brief allusion to religious freedom was not the only time he mentioned the Christian communities of the region.

“A decisive contribution to combating this [throwaway] culture is made by the countless charitable and educational works carried out by Christian communities,” Francis said. “Whenever dioceses, parishes, associations, volunteer organizations – one of the great treasures of Italian pastoral care – or individuals strive to support those abandoned or in need, the Gospel becomes all the more powerful and attractive.”

Especially in the Middle East, where Christians are a tiny minority virtually everywhere except Lebanon, Christians nonetheless operate a disproportionate share of the schools, hospitals and social service centers, serving a largely Muslim clientele. Indeed, Catholic schools across the region are the envy of the Middle East, and have educated a large chunk of the social, political and economic elite in virtually every Middle Eastern country.

All this is a reminder of a point that many Middle Eastern Christian bishops will make in quiet, off the record, usually in moments of deepest frustration: “The Middle East,” they’ll say, “needs Christians more than Christians need the Middle East.”

That’s a debatable point, because something precious and arguably essential to Christianity would be lost should it disappear from the land of its birth. Nonetheless, one understands the point – and Francis, albeit ever-so-gently, issued a reminder on Sunday.

Many anti-terrorism and security experts, by the way, say today that the survival of Christianity in the Middle East isn’t just important on a confessional or spiritual level, but that it’s also essential to stability and economic development in these societies, which in turn are key to turning the radical tide.

Second, Francis may be reticent to talk too explicitly about Christian suffering when he’s well aware they’re not the only religious community in the firing line. Indeed, the overwhelming majority of the victims of Islamic terror in the region are other Muslims, especially members of minority groups such as the Druze, the Alawites, and the Alevis, as well as other religious and ethnic communities such as the Yazidis in Iraq.

The pope may be concerned that if he focuses too strictly on Christian suffering, the Muslim majority in Middle Eastern societies either will dismiss it as a confessional concern or may think he’s framing the situation in terms of “Christians good, Muslims bad.”

Third, Francis may well also believe that anti-Christian persecution in the Middle East is an acute symptom of a deeper disease: An especially virulent form of the “throwaway” culture that views some lives not merely with indifference but acute hatred, and is willing to embrace the most extreme measures to eliminate them.

Until that disease is treated, Francis may feel, focusing on its symptoms is merely a stopgap, delaying the real day of reckoning. As an alternative, he urged building a culture of dialogue.

“Dialogue alone enables us to come together, to overcome prejudices and stereotypes, to tell our stories and to come to know ourselves better,” he said.

To be sure, Christian victims of ISIS and other jihadist groups in the Middle East may be hurt that the pope didn’t say more about their plight, expecting that he of all people, should be their voices. Christian bishops are also often frustrated, saying privately that their own governments are incapable, or unwilling, to protect Christians adequately, and that someone needs to rouse the international community to act.

Who, they ask, is likely to do that if not the pope?

For those constituencies, Francis’s strategic discretion about anti-Christian persecution can be hard to swallow. Meanwhile, ideological opponents of the pope in the West will point to it as a misguided policy of appeasement, or leftist PC convention run amuck, or just basic weakness and cowardice.

Still, whatever one makes of the discretion, Bari seemed to confirm there is a strategy. The only thing that’s not clear – and, let’s face it, this is the pope’s big roll of the dice – is whether it’ll work.