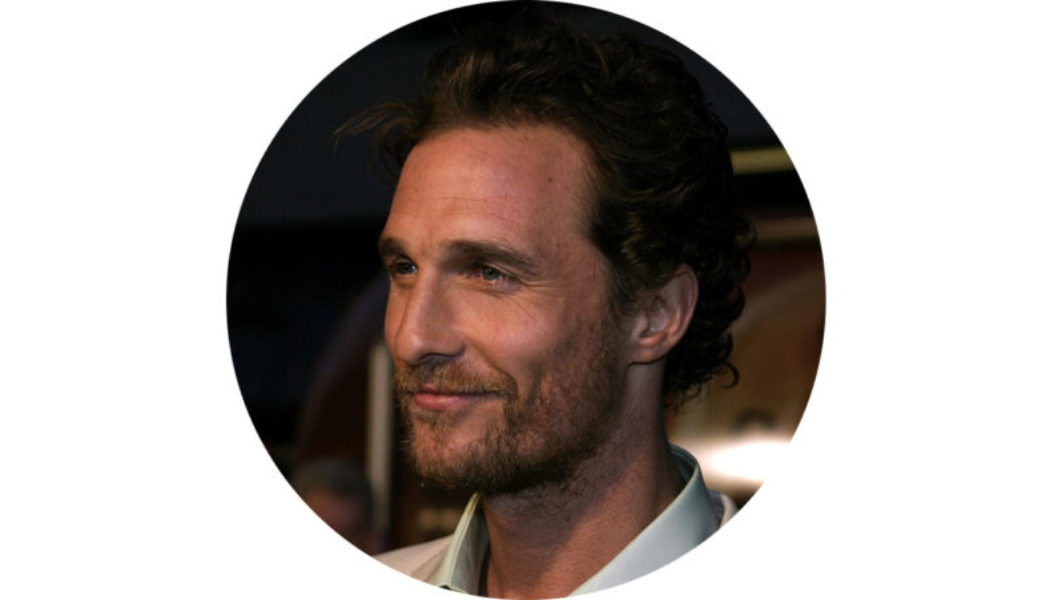 This list of famous people who pray will no doubt surprise you. You’ll see names that make you think, really?!

Do you feel like praying is something for dull, boring people? Not according to these worldwide famous artists and actors! Read here what place prayer occupies in their lives.

A celebrity who certainly does not hide that he believes in Jesus is Matthew McConaughey (Dallas Buyers Club, Interstellar, The Wolf in Wall Street). Even during his Oscar speech, he mostly thanked God. Prayer plays an important role in his life and helps him to remain standing in Hollywood.

“What I love about prayer is that in that moment I am ‘just’ a child of God. Not that famous actor, not the husband of, not the father, but simply a man in contact with his Maker. Prayer, as it were, stops time. God is then number 1 and I only after that. This helps me to see life in a different perspective. To leave my past and future behind and above all to really live in the present.”

Everyone knows actor Hugh Jackman from big blockbusters like The Greatest Showman, Les Misérables and of course his role as Wolverine. But did you know that he prefers to be on stage? There he feels most at home and there he also experiences a certain connection with God.

“It may sound a little crazy to you, but when I’m on stage I feel the joy of God in me. Very deep inside. As a kind of calling.”

Hugh experiences that calling at a young age. He briefly talks about it in a well-known talk show.

And what role does prayer play for Hugh in his acting?

“Every night before I go on stage, I pause and dedicate performance to God. As a kind of surrender to God, but also to the story, the character, the audience.”

Actress Viola Davis (The Help, Fences, How to get away with Murder) likes to talk about her greatest prayer answer: her husband! She tells how at a certain moment she very consciously prayed for a man after God’s own heart.

“I prayed for a man who was emotionally available, someone a little older and more experienced in life. And above all, someone who loves God more than herself.”

And voila: three weeks later she meets her husband. As one of the first dates, they go to church together. They get married, adopt a daughter and are still happily together.

Only going to church on Sundays? This actor prefers to step inside every day. Mark Wahlberg (Transformers, Ted, Patriots Day) shares the importance of starting his day with God.

“Every day I start on my knees and thank God for life. When I have to go somewhere, I always stop by the church first. Those 10 minutes of focus on God help me get through the day.”

And what is he praying for?

“I pray that I can serve God well, but also that I may be a good father, husband, son, friend, brother, uncle, neighbor, and a good leader. And above all, I pray that I may always do the right thing in God’s eyes.”

Bono also occasionally walks into the church but his favorite place to pray is….his bed! With his family, they sit down on the bed and pray together. Bono is the lead singer of the band U2. Sold out concerts, 150-170 million records sold and 22 Grammys in the trophy cabinet. A true rock and roll life. Yet Jesus is very important to him.

In an interview, Bono tells how his prayer life has changed after a remark from a wise man. He said to him:

“Stop asking God to bless your work. Go to work! Seek out what God is doing and help—because that blessing is already here. He calls us to stand up for the poor. So let’s do it ourselves.”

The list of top films by Denzel Washington is endless: Malcolm X, Glory, Training Day, etc. Nine times nominated for an Oscar and two beautiful statues adorn his chimney. But anyone who thinks Denzel has always been so successful is wrong. He has been rejected at many auditions and has had to struggle for years. Yet he persisted.

“I prayed, I prayed and I prayed. I kept praying. But I also kept failing, failing and failing. Yet I continued to pray. I just knew my breakthrough would come one day. You know the saying: if you hang around the hairdresser long enough, you will automatically get a new haircut. I had to keep hoping and above all keep praying.”

And the success finally came. Denzel is now one of Hollywood’s biggest stars. That can just go to your head. But his mother subtly reminds him that it’s not his own merit at all. She points him to important people who prayed for him. Have a look here:

Do you find it difficult to pray? Denzel has another golden tip for you:

“Put your slippers far under the bed so that when you get up you have to get on your knees to get them out from under the bed. And while you’re in that position, you can start the day with prayer!”

Do you pray before making important choices? This actor doesn’t make a decision until he prays for it first. Actor David Oyelowo (Selma, Interstellar, Last King of Scotland) asks God which movies he should star in.

“My faith determines who I am and what roles I play. I pray for the right roles, but also how I fill those roles. And apparently God has good taste because so far I am very satisfied. I’m not afraid of dark, difficult roles. It is precisely as Christians that we must let the light of God shine in those dark places.”

Have you ever seen a movie that really made you think? It happened to actress Jennifer Garner herself (known for films such as Catch Me If You Can, Daredevil, Elektra and Juno). Not when she saw a movie, but when she herself starred in a true story about a bizarre prayer answer. In the movie Miracles from Heaven, Jennifer plays a mother whose child is seriously ill and can no longer eat independently. When the girl also falls high from a tree, she is rushed to the hospital. There she turns out not only to be fine, but also to suddenly be cured of her illness. Jennifer has had a lot of contact with this family before her role and their unwavering faith in God has really changed her life. After years of absence, Jennifer once again entered a church and started praying again.

“This movie was a real gift. Not only for me, but also for my children. I realized that I had really missed God and that I had failed my children as well. I love going to church together every Sunday now and praying together for everything that concerns us.”

And you know what’s also quite special? Jennifer Garner was married to actor Ben Affleck (Batman, Good Will Hunting, Pearl Harbor) at the time. Despite the fact that they got divorced, they regularly go to church with their children. “Our faith is greater than our relationship. We want to pass that on to our children.”

Some people who pray can really surprise you with the fact that they do that. Chris Pratt (Parks and Recreation, Bride Wars, Guardians of the Galaxy) is one of them.

You might not call him very religious, but he can sometimes be surprising. Watch his speech at the MTV Awards here.

Packed with a lot of humor and crazy stuff, his message is actually really powerful.

“People are going to tell you that you are perfect. You are not! You are imperfect. Forever. But there is a powerful power that made you this way. If you can accept that, you will experience true grace. And that grace is a gift. Just like the freedom we have in this country (USA), that freedom is paid for with the blood of another. Never forget that!”

We throw another surprising name into the list of famous people who pray: Mr. T. This icon is one bonk of muscle. He started out as a bodyguard for stars such as Muhammad Ali, Michael Jackson and Diana Ross. With his role as B.A. Baracus in the A-Team eventually became world famous himself. His special haircut, profusion of golden accessories and big muscles made him a TV hero. For him, however, prayer is just as important as training.

Perhaps surprising to you, but if you follow Dolly Parton a bit, one thing is clear: God is the most important thing in her life. Of all the famous people who pray on this list, Dolly is perhaps the most outspoken about her belief in God. God and Jesus often play a major role in her music. It doesn’t matter which talk show she’s on or what stage she’s on, Dolly loves to talk about her personal relationship with God. Listen here (at 2.00 she talks about prayer).

“I pray every day that God will let me be a light in the world. To bring his love and light into the world. To honor him. Every day!”

Did you know that even James Bond prays? Well, at least actor Pierce Brosnan who for years played the role of secret agent 007. Also known from films such as Mamma Mia, Thomas Crown Affair and The Misfits. A violent event in his life turned his life upside down and since then prayer has played an important role in his life.

“Prayer Helped Me When I Lost My Wife to Cancer (1991). Her death touched me deeply and it is hard to mourn when all eyes are on you. God was my safe haven. And now praying helps me to be a better father, a better actor, and a better man.”

Which of the praying celebrities have surprised you? Would you like to discuss it further? Send us a message here. At Jesus.net, we have a worldwide team of people who – like these famous people who pray – love to pray. For you too! Send us your prayer request here and we will pray for you.