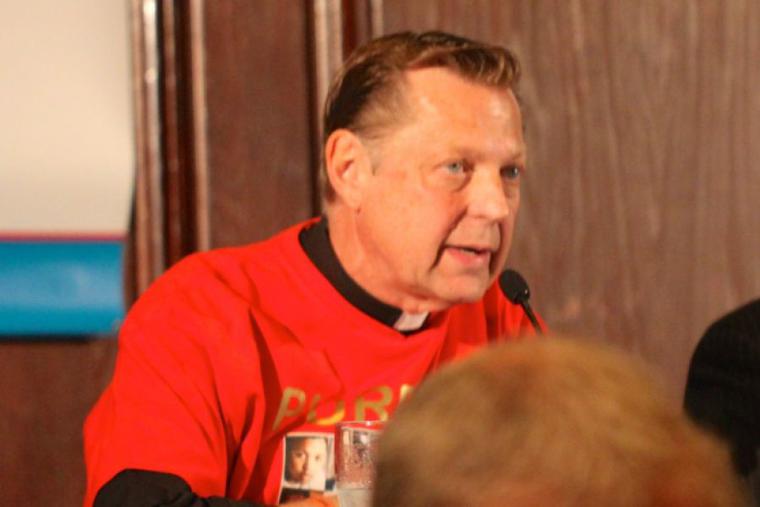 As is required by archdiocesan child protection policies, the allegation was reported to the Illinois Department of Children and Family Services and law enforcement, Cardinal Cupich wrote.

A well-known Chicago priest has been asked to step aside from ministry during an investigation into an allegation of sexual abuse against a minor.

Father Michael Pfleger, senior pastor at St. Sabina parish and a well-known social activist, will live away from his parish while the allegation — which he denies — is investigated. The alleged abuse occurred more than 30 years ago, the archdiocese says.

In an Oct. 15 letter, Cardinal Blase Cupich of Chicago said Father Pfleger has “agreed to cooperate fully” with the request to step aside from ministry following the allegation made to the Office for Child Abuse Investigations and Review.

As is required by archdiocesan child protection policies, the allegation was reported to the Illinois Department of Children and Family Services and law enforcement, Cardinal Cupich wrote. The archdiocese has begun its investigation and “we will do our best to keep you informed,” the cardinal pledged.

“The person making the allegation has been offered the services of our Victim Assistance Ministry and the archdiocese has begun its investigation and we will do our best to keep you informed,” Cardinal Cupich wrote.

St. Sabina pastor Father Thulani Magwaza will serve as parish administrator in Father Pfleger’s stead, Cardinal Cupich wrote, and noted that until Magwaza returns from a visit with family in early November, Father David Jones will serve as temporary administrator.

This marks the second allegation of sexual abuse leveled against Father Pfleger in the past two years; after three men brought forward allegations in early 2021, Father Pfleger was reinstated that June after a Chicago archdiocese investigation concluded there was “insufficient reason” to suspect he was guilty of the allegations, which he had denied.

In an Oct. 15 statement of his own, Father Pfleger complained that “the process of the Archdiocese today is that a priest is presumed guilty until proven innocent.” He said his status as a “high-profile,” “outspoken” and “controversial” person has engendered “jealousy, attacks, and hate.”

“Let me be clear — I am completely innocent of this accusation,” he wrote. “It seems like most of my ministry I have spent fighting to stay a priest and to continue the work of justice, and to serve the good people of St. Sabina’s and our community. I cannot express how difficult, disruptive, and painful this process is to me and those who are close to me.”

A Chicago native, Father Pfleger has spoken out against the epidemic of gun violence in the city’s South Side that has afflicted his parishioners at St. Sabina’s, a predominantly African-American parish community. Father Pfleger adopted an 8-year-old boy in 1981 and another son in 1992. In 1997 he became the foster father of another city youth who was killed in a gang shootout in 1998.

The priest’s actions have put him at the center of controversy for years. The late Cardinal Francis George of Chicago suspended Father Pfleger in 2011 after the priest threatened to leave the priesthood if Cardinal George reassigned him. The cardinal later accepted Father Pfleger’s apology and reinstated him as St. Sabina’s pastor. In 2019, Cardinal Cupich publicly denounced Father Pfleger’s decision to invite controversial Nation of Islam leader Louis Farrakhan to speak at St. Sabina.

Father Pfleger has voiced support for the ordination of women as Catholic priests, a position that the Church has held to be incompatible with the Catholic understanding of the priesthood.

Father Pfleger also attracted attention and criticism for a Dec. 2021 Christmas Eve Mass that featured jazz musicians, choreographed dances around the altar, and theatrical lighting effects. Many of those upset by the Mass said it crossed the line from worship to entertainment.

Contacted by CNA at the time, Father Pfleger declined to answer questions about the Christmas Eve liturgy.

“These are some of the same people that attack Pope Francis and Cardinal Cupich and have ignored the gift and value of Black Catholicism in the Catholic Church, so I am not responding to their attacks,” Father Pfleger said in an email.