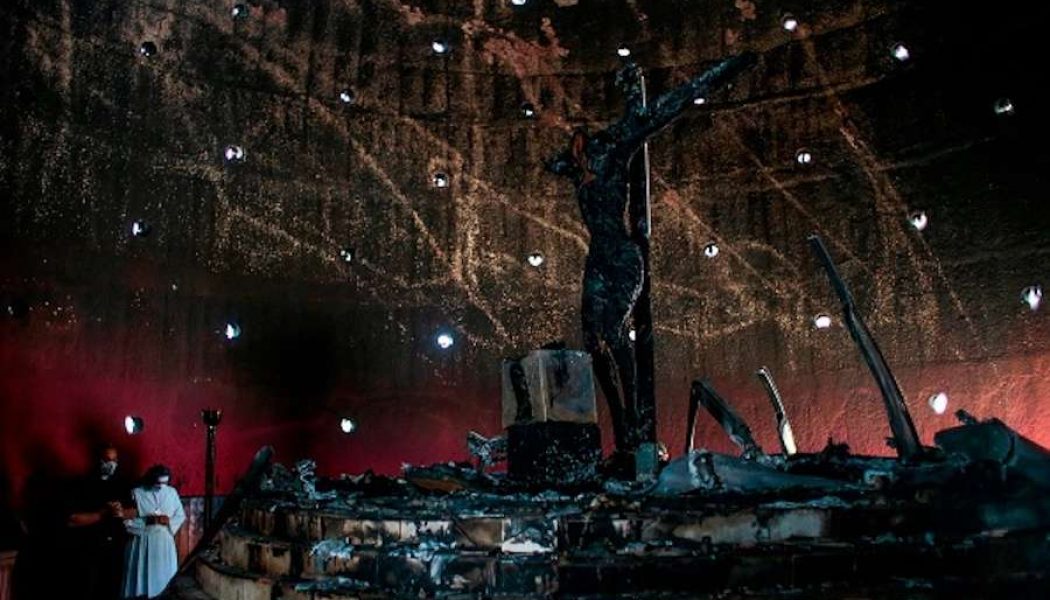 CNA Staff, Jul 31, 2020 / 07:15 pm MT (CNA).- An unidentified man threw a firebomb into a chapel of Managua’s Cathedral of the Immaculate Conception on Friday, severely damaging the chapel and a devotional image of Christ more than three centuries old.

“This was a planned act, very calmly planned,” Cardinal Leopoldo Brenes of Managua said. “So I want to say it clearly: it is a terrorist act, an act of intimidating the Church in her mission of evangelization.”

The man wore a hood and held something in his hands that witnesses could not identify. He entered the Chapel of the Blood of Christ and said “I come to the blood of Christ,” the Nicaraguan newspaper La Prensa reports. The witnesses saw the man throw the object in his hands.

The cardinal said witnesses saw the man circle the cathedral in the Nicaraguan capital for 20 minutes and he planned his exit through a gate which was recently stolen.

“In other words, he calculated everything: how to enter, where to do it, and then where to escape. This was planned,” the cardinal said.

A church worker and a parishioner were in the chapel. They noticed the fire and reported it to authorities. While the man was not identified, witness Alba Ramirez said the man was known to some in the area. According to Radio Corporacion, men in civilian clothes with a threatening attitude were in the vicinity of the cathedral.

The chapel houses a 382-year-old image of the Blood of Christ, a depiction of Jesus Christ crucified..

Cardinal Brenes said due to the fire’s heat “half of the face came off, but the image was charred. We are going to evaluate this calmly because it is a beautiful image more than 300 years old.”

The Archdiocese of Managua said the act was “a totally condemnable act of sacrilege and desecration.”

“We must remain in constant prayer to defeat evil forces,” the archdiocese said.

The cathedral’s gates were closed after the fire. Cardinal Leopoldo Brenes visited the chapel to inspect the damage.

Auxiliary Bishop Silvio Baez said on Twitter that he contacted the religious and priests of the cathedral after the fire. He voiced his prayers for the Nicaraguan people and his closeness to them “in this painful moment.”

“We have cried together because of the fire that has occurred in the chapel of the venerated image of the Blood of Christ,” he said.

The apparent attack comes after tensions between some Catholics and supporters of President Daniel Ortega, who previously led the country for over a decade after the Sandinistas’ 1979 ouster of the Somoza dictatorship. Ortega has again been president of Nicaragua since 2007, and oversaw the abolition of presidential term limits in 2014.

Ortega’s government has accused many bishops and priests of siding with his opposition.

Backers of Ortega have led actions against some churches, including Managua’s cathedral when critics of Ortega took refuge there.

In reaction to the fire, she suggested, without evidence, that candles were to blame, as were people who placed candles too close to religious images. She did not condemn the attack on the church. She said she would wait for the opinion of police experts on the causes of the fire.

On Wednesday, unidentified people desecrated the chapel of Our Lady of Perpetual Help in Nindiri, Masaya, a municipality about 13 miles outside of Managua. They stole the ciborium, profaned the tabernacle, and trampled on the hosts. They also broke images, broke benches, and damaged other furniture, doors and pipes, La Prensa reports.

On July 25 there was an attack on the chapel of Our Lord of Veracruz parish in Masaya district. The chapel was desecrated and audio equipment and money boxes were stolen.

In November 2019 Mothers holding a hunger strike seeking the release of their relatives, whom they consider political prisoners, took refuge at Managua’s Immaculate Conception Cathedral. They were soon followed by the mob of government supporters. The mothers removed themselves to another part of the cathedral.

However, the pro-government forces beat a priest and a religious sister who had reprimanded them.

At the time, Msgr. Carlos Avilés, vicar general of the Archdiocese of Managua, said “there are a number of unjustly detained political prisoners in the country. Their mothers desperately tried to enter the cathedral to pray … then the government with the police helping them, let in a mob of government supporters backed by the police to violate the cathedral.”

The protests were part of a crisis which began in April 2018 after Ortega announced social security and pension reforms. The changes were soon abandoned in the face of widespread, vocal opposition, but protests only intensified after more than 40 protesters were killed by security forces.