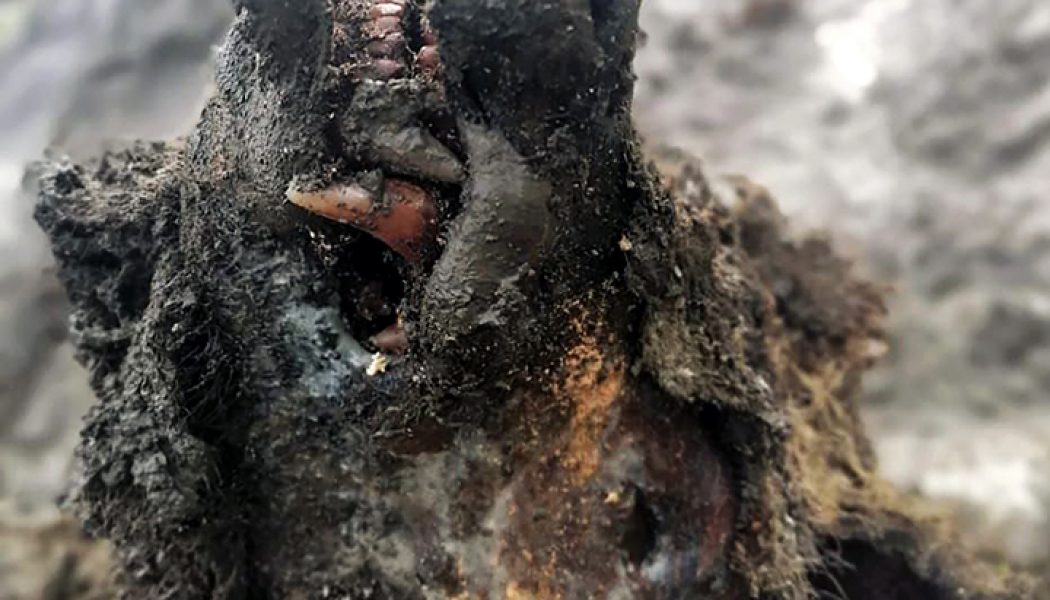 Unique discovery of the perfectly preserved extinct cave bear showing its teeth after up to 39,000 years. Picture: NEFU

More details of the finds are to be announced soon.

Until now only the bones of cave bears have been discovered.

The new finds are of ‘world importance’, according to one of Russia’s leading experts on extinct Ice Age species.

Scientist Lena Grigorieva said of the island discovery of the adult beast: ‘Today this is the first and only find of its kind – a whole bear carcass with soft tissues.

‘It is completely preserved, with all internal organs in place including even its nose.

“Previously, only skulls and bones were found. This find is of great importance for the whole world.’

First ever preserved grown up cave bear – even its nose is intact – unearthed on Bolshoy Lyakhovsky island, with at least one preserved carcass of a cave bear cub found on the mainland of Yakutia. Pictures: NEFU

The remains were found by reindeer herders on the island and the remains will be analysed by scientists at the North-Eastern Federal University (NEFU) in Yakutsk, which is at the forefront of research into extinct woolly mammoths and rhinos.

Russian and foreign colleagues will be invited to join the study.

The cave bear (Ursus spelaeus) is a prehistoric species or subspecies that lived in Eurasia in the Middle and Late Pleistocene period and became extinct about 15,000 years ago.

According to the rough preliminary suggestions the bear could live in Karginsky interglacial (this was the period between 22,000 and 39,500 years).

‘It is necessary to carry out radiocarbon analysis to determine the precise age of the bear,’ said senior researcher Maxim Cheprasov from the Mammoth Museum laboratory in Yakutsk.

The finder transferred the right to research to the scientists of NEFU, he said.

Bolshoy Lyakhovsky Island, or Great Lyakhovsky, is the largest of the Lyakhovsky Islands belonging to the New Siberian Islands archipelago between the Laptev Sea and the East Siberian Sea in northern Russia. Picture: Alexander Oboimov

‘A scientific programme for its comprehensive study will be prepared. We will have to study the carcass of a bear using all modern scientific research methods – molecular genetic, cellular, microbiological and others.

‘The research is planned on as large a scale as in the study of the famous Malolyakhovsky mammoth,’ said Dr Grigorieva, leading researcher of the International Centre for Collective Use of Molecular Paleontology at the NEFU’s Institute of Applied Ecology of the North.

Lena Grigorieva, first from the left, leading researcher of the International Centre for Collective Use of Molecular Paleontology at the NEFU’s Institute of Applied Ecology of the North. Lena is pictured by the carcass of a 42,000 year old foal found inside the Batagai depression in Yakutia