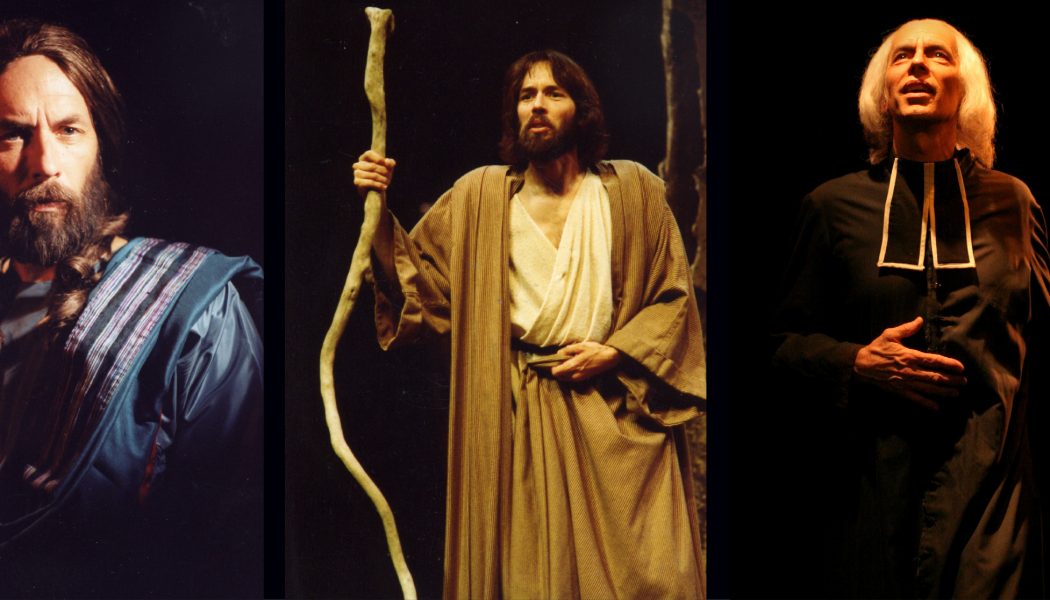 Seeking guidance, Leonardo wrote to Mother Teresa of Calcutta, who wrote back telling him to “do something beautiful for God.” That Advent, he began performing The Gift of Peace: The First Six Chapters of Saint Luke’s Gospel, a title inspired by Mother Teresa’s Nobel Peace Prize acceptance speech. The following Lent, he toured the Northwest with The Passion According to Luke.

Forty years and more than 4,000 performances later, Leonardo and his wife, Patti — who met in 1980 as actors at the Oregon Shakespearean Festival — have created 11 dramatic productions about the Gospels and saints, and produced seven films and numerous audio projects (including daily meditations from the writings of Pope Emeritus Benedict XVI), under their umbrella of Saint Luke Productions. They’ve performed live shows in six countries for diverse audiences, from parish gatherings to survivors of the Auschwitz concentration camp and thousands of young people at World Youth Days in Denver and Rome.

Oh, and they raised seven children at the same time (the youngest is now a college senior).

“It’s been a wonderful way to evangelize and I guess to pour ourselves out for God,” Patti said of their life’s ministry. “You only have a short amount of time on this earth [to] do something that would do some good for souls.”

It’s amazing, Leonardo said, to read the letters from people who have been deeply affected by their shows. They have had their faith sparked, found strength in trying times, or discerned vocations as priests and religious, he said.

Their ministry, he said, is not about “fame or any of that kind of stuff.”

“It’s about touching people’s lives, and hopefully it touches us, too.”

Leonardo Defilippis portrays Christ in The Gospel According to John, Jesus in The Passion According to Luke, and St. John Vianney. Photos: Courtesy Saint Luke Productions

Based in the Vancouver, Washington, area, Saint Luke Productions is the longest continuously running professional Catholic theater group in the nation. Supported by donations, Leonardo has performed all over the country, including at about half of the parishes in the Archdiocese of Seattle.

When Leonardo and Patti met working at the Shakespearean Festival, he had returned to the church and was discerning whether he had a vocation as a priest. Patti, raised Presbyterian, recalled that Leonardo was different from the other actors — he skipped the post-performance bar outings and went to Mass every morning. One day, Leonardo asked Patti to go to Mass with him. “I just had kind of an immediate conversion to Catholicism when I went to Mass there,” Patti said; she joined the church in 1981 and they married in 1983.

The couple had their first child in 1985 and toured as a family; after their second child was born in 1987, Patti toured less frequently, and then only intermittently after their next two children came along. While Leonardo continued touring, Patti stayed home with the kids, juggling homeschooling, writing, directing, fundraising and other home and business responsibilities.

As the years went on, Patti and Leonardo developed more shows and their reach expanded to bigger parishes, theaters and events — such as performing for all the priests in a diocese. It was definitely a change from the “little Bethlehem type of experience” of the early days, Leonardo said.

Saints for our times

Their shows have gotten more sophisticated, combining multimedia elements with the live actor’s performance. They produced their first feature-length film, Thérèse, in 2004 (Patti wrote the screenplay). In 2021, they’re planning to release Heart of Mercy, a film about St. Faustina. Leonardo calls their films “a movement of the people,” because they have been completely funded by donations. Today, they have two other actors touring in addition to Leonardo.

Some of their live productions, Leonardo noted, have come at key moments in the U.S. — the life of St. John Vianney, “one of the greatest priests of all time,” when Catholics were reeling from the priest sex abuse crisis; and St. Faustina, who brought the message of God’s divine mercy, during this time of society’s “moral decay.” And their show about Venerable Augustus Tolton, America’s first Black priest, which was touring before COVID-19 hit, coincides with current discussions of racial justice across the country.

These saints provide lessons for people in the modern world, Leonardo said.

“They’re an answer or they help solve the problem, if we only listen to them,” he said. “If [more] people saw these kind of truths, it could truly transform their lives.”

Staying focused on ‘the things above’

Patti and Leonardo certainly have been influenced by the saints they portray, but they also look for “inspiring people in society that sustain us to keep us going,” Leonardo said. That includes Benedictine Abbot Jeremy Driscoll of Mount Angel Abbey in Oregon, who sits on the Saint Luke Productions board.

“He’s been a good friend and spiritually keeps us focused on the things above and not so much on the things below,” Leonardo said.

Patti and Leonardo, members of Holy Rosary Parish in Portland, also find encouragement in modern-day saints: St. Teresa of Calcutta, of course, and St. John Paul II, whom they met in Rome shortly before his death, when they presented him with a copy of Thérèse. “I got that wonderful privilege of seeing him,” Patti said. “He was pretty infirm at that time, but I was still able to ask him to pray for my kids. So that was pretty cool.”

Leonardo and Patti Defilippis portray St. John of the Cross and St. Teresa of Avila, left, and the bridegroom and bride in Song of Songs. At right, a scene from the St. Faustina movie Heart of Mercy. Photos: Courtesy Saint Luke Productions

Prayer is a regular part of the couple’s life. The rosary “has always been our bedrock in our mission, in our lives,” Leonardo said. “That’s what helped convert me over when I came back to the church. That’s been part of our family and our history.”

The Divine Mercy chaplet has become more important to them since they began telling the story of St. Faustina. In the morning, they do the readings from the Divine Office together, and then pray morning prayer during their team meeting (with most of their staff now working remotely). “I think it’s helped our ministry a lot, praying that,” Patti said.

They also ask their supporters for prayer intentions, an experience that is “very, very moving and very humbling,” Leonardo said, even more so when priests are the ones asking for their prayers.

One of the things Patti enjoys most about their ministry is interacting with supporters, “just trying to find ways that we can be inspiring to people.” Her most recent project is the Hope and Trust Rosary, a new set of meditations intended to encourage people during this time of COVID-19, when “there’s a lot of discouragement,” she said.

Leaving the future up to God

The past 40 years haven’t always been smooth sailing for Patti and Leonardo, but their faith and trust in God has carried them through.

“When you take a lot of risks you find out how faithful God is,” Patti said. “He’s pulled us out of some incredible situations, times when I’ve said, ‘If this works out, I’m never going to distrust God again.’ And then I go on and distrust God,” she said, laughing.

After 40 years, Patti and Leonardo Defilippis are leaving the future of their ministry up to God. Photo: Courtesy Saint Luke Productions

As they look to the future, Patti and Leonardo hope to find young, energetic leaders with experience and skills in theater, film, writing, the technical side and other aspects to continue their ministry into the next generation — God willing.

“We really do need to have God show us who’s going to lead us into the future,” Patti said. “Of course, it could be something that we were just meant to do with our lives, but it also has the potential to be something that could really grow with young energy and talent.”

Their kids have helped with the “family business” over the years and know how much work it is, Leonardo said. Now all adults, some of them still help out, but “to take it over, it’s just a different charism. We need to pray as we go forward on how to pass the baton.”

The archdiocese and its people are key to helping proclaim the Gospel through a ministry that could inspire the faith of so many clergy, laypeople and youth, Leonardo said. “We need their input, their advice, their support and prayers, financially and spiritually, so that we can continue to come and perform or create shows.”

There are still life stories Leonardo and Patti would like to tell — including St. John Paul II, St. Teresa of Calcutta, Fulton Sheen, St. Gianna Molla, other women saints and saints of diverse cultural backgrounds.

“Our mission is to remind people there is another home,” Leonardo said. Everyone wants something, he noted — whether it’s power, fame or a new kitchen.

“But you know in the end that you’re not going to take any of that with you except your faith … and that’s the greatest treasure. And I think that’s what these saints, every one of them, is trying to tell us.”

Live dramas (some available on DVD)

Tolton: From Slave to Priest

The Confessions of Saint Augustine

John of the Cross

The Gift of Peace: The First Six Chapters of Saint Luke’s Gospel

The Gospel According to John

Thérèse: The Story of a Soul

The Passion According to Luke