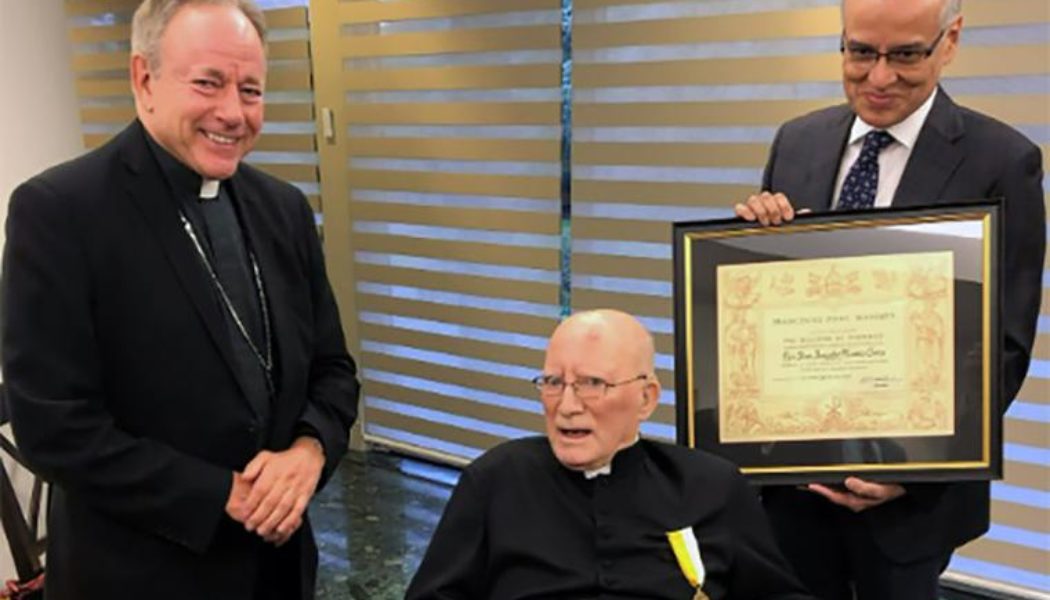 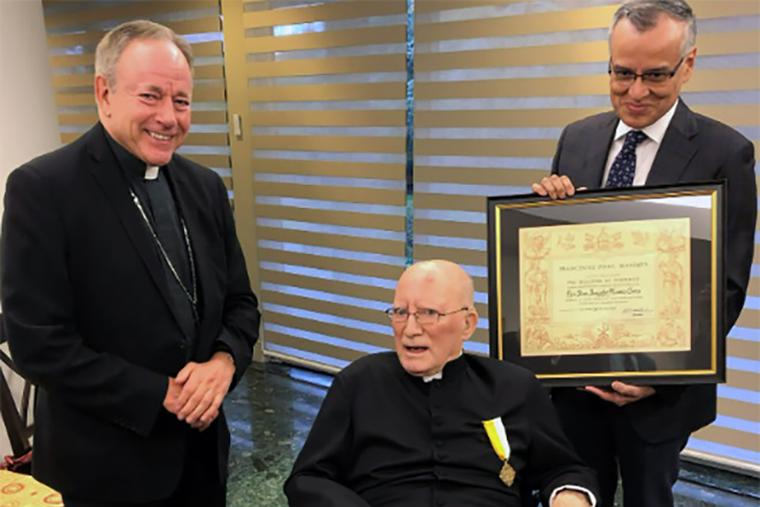 That was a widely shared judgment upon the death of Father José Luis Soria, an Opus Dei priest who died in Vancouver on Oct. 3.

“Canonizable” is the key. Opus Dei’s raison d’être is that ordinary people can become holy — saints in heaven — in the most mundane circumstances, attracting no particular attention from the world. Being a saint is rather the default position from their members. A “canonizable” saint is something different, one who attracts widespread attention for his holiness.

One story making the rounds about Father Joe — as he was universally known — was that Archbishop Michael Miller of Vancouver was once asked why there were no canonized saints from his diocese. “Because Father Soria has not died yet,” Archbishop Miller replied.

At age 90, Father Soria’s death was long expected, and even a desired blessing. After two strokes in 2014, he was unable to continue his rather intense ministry of preaching, confessions, spiritual direction and travel. In recent years his physical diminishment advanced and it was difficult for him to move and speak.

Father Soria was best known in Opus Dei for the first half of his life. His mother was one of the first married women (“supernumerary”) to join Opus Dei, not long after it was founded by Msgr. Josemaría Escrivá in 1928. Growing up in Valladolid, Spain, Soria studied medicine there. He joined Opus Dei as a celibate member (“numerary”) in 1949, aged 17. Having qualified as a medical doctor, he moved to Rome in 1953 to study for the priesthood, and was ordained in 1956.

Given senior positions in central offices of Opus Dei, for 20 years (1956-1976) he also served as Escrivá’s personal physician. He thus lived in close proximity to the future saint for reasons both of governance and medical care.

He was with Escrivá when the Opus Dei founder suffered a sudden heart attack in June 1975 and tried to revive him.

“After an hour and a half of vain efforts by a small group, some of them also physicians, I closed his eyes with my fingers,” Soria would later write.

“In Opus Dei, he became a master of the interior life and a historical reference point for all. He was a great witness to the life of the founder,” preached Msgr. Antoine de Rochebrune, vicar of Opus Dei in Canada, at Soria’s funeral Mass Oct. 14, imagining a “reunion in heaven” between patient and doctor, founder and follower.

In 1976, at age 44, Father Soria was sent to Canada, where he would work in Opus Dei apostolates for the second half of his life. While Opus Dei was first established in Canada in the 1950s, it has relatively few numerary male vocations, so leadership was often sent from other countries. Soria was the vicar for Canada from 1977 to 1984.

It was after that service that another missionary phase of his life began, traveling monthly to Alberta and British Columbia to plan the seeds of Opus Dei in western Canada. After 13 years of frequent travel, he moved permanently to Vancouver in 1997, where he lived for 25 years, becoming such a beloved part of the local Church that Archbishop Miller granted him the Pro Ecclesia et Pontifice medal in 2020. It was a recognition not only of the patriarch of Opus Dei in western Canada, but his fatherhood to many priests in Vancouver.

Why the extraordinary esteem for Father Soria, given that the last 25 years of his life were absolutely routine, following the highly regulated, inflexibly scheduled life of an Opus Dei priest?

Three aspects of his priestly witness come to mind: humility, serenity and preaching.

Father Soria had extraordinary natural gifts and was, to use a favorite Opus Dei term, a man of great refinement. One of his priestly brothers told me that had he not become a priest, he would have certainly been one of Spain’s most senior ambassadors. Either that or perhaps minister of health.

His work in Canada was not so exalted, preaching for years in various parishes and retreat houses, often having to put up with makeshift arrangements and, lacking a permanent Opus Dei center in the cities he visited, taking his meals in with families in sometimes chaotic circumstances. He embraced all of this, not thinking himself above it all, or appealing to his closeness to St. Josemaría for special treatment.

As my family was one of those who occasionally hosted Father Soria, we saw his unusual serenity. It is easy enough for a priest to be serene in the sanctuary, another thing in a family home. Yet he was calm amidst the disruptions of family life, and carried dice in his pocket to entertain children with one of his favorite magic tricks.

The hundreds of people who went to him for confession and spiritual direction often commented upon his serenity. Whatever chaos might be reigning in their lives, Father Joe, in both manner and substance, brought wisdom and peace to the situation. It seemed that he never doubted that in God’s providence all would be well. In his last years of severe physical diminishment, deprived of the ability to speak, he never gave any sign of frustration or resentment. The “canonizable” holiness of which so many spoke became more evident in those last years.

Most of all though, Father Soria was renowned as a superlative preacher. Like many new institutions in the Church — Sant’Egidio or Communion and Liberation, for example — Opus Dei has a lot of talking. Their standard pious exercise is the “meditation” in which the priest preaches for a full 30 minutes. It would not be unusual for Soria and his brethren to have this duty daily, or even twice daily. During the frequent preached retreats, there are four meditations per day.

Not surprisingly, very few priests can be interesting or engaging for that volume of preaching, especially given the largely ascetical character of Opus Dei preaching. Father Joe was exceptional, managing to preach at a level of sustained excellence that people who heard him decades apart shared the impact his words made on them.

Laypeople were occasionally reluctant to praise Father Soria too lavishly, lest it appear (correctly!) that his brother priests were less inspiring, repetitive or even dull by comparison. No matter; the most fulsome praise for Father Soria’s preaching came from his fellow priests in Opus Dei. And given how critical priests can be of each other, that is the highest praise indeed.

As he aged, Father Soria became not only a wise elder, but something a spiritual grandfather to many of the families he guided. He was frequently invited to family functions, which was a bit of a departure from Opus Dei custom. He was present at my first Mass in my home parish, and at my sister’s wedding. Everyone recognized that Father Joe was in a category of his own.

But not entirely of his own, as he would be first to insist. For to be in heaven is to be part of a Communion of Saints. Whether Father José Luis Soria is eventually declared as such remains to be seen — but many people in Canada already believe that he is.