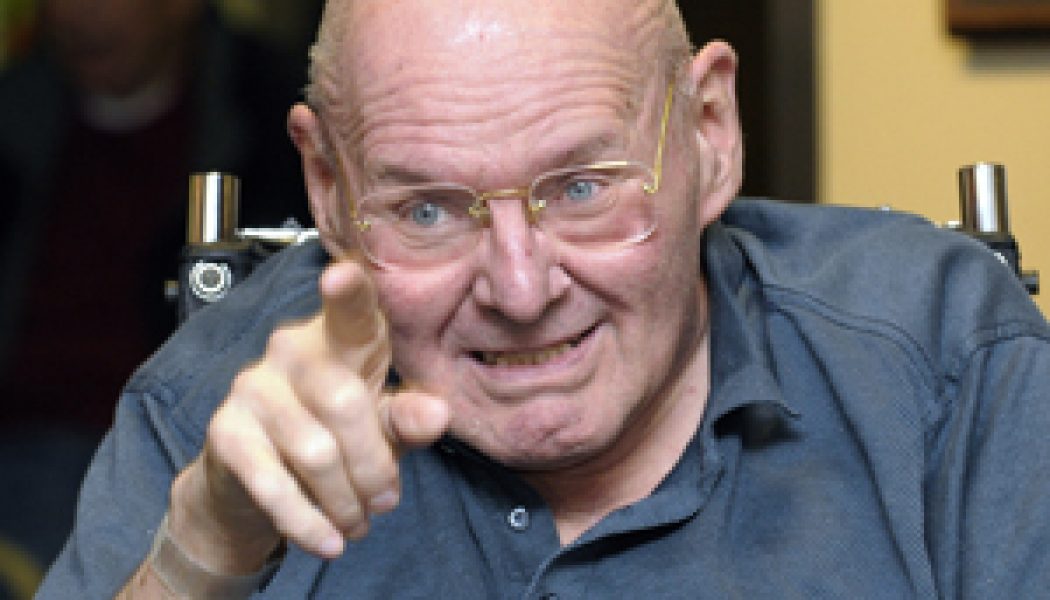 This homily was preached at the funeral of Fr. Reginald Foster, OCD on January 21, 2021, at Holy Hill Basilica by Fr. Michael Berry, OCD, Provincial.

I wish to first welcome Fr. Reginald’s family, the children of his siblings John and Susan, who are with us today and have come both to honor the memory of and to pray for their uncle and great-uncle. I welcome those very close friends of his from the Milwaukee area who have known and loved him for many, many years, as well as those who have been so faithful in visiting with him regularly at St. Anne’s. I welcome the small representation of Fr. Reggie’s students who have come to pay their respects to their beloved teacher. I am sorry that the circumstances of the pandemic and present restrictions in place do not permit today for a larger attendance. No doubt, in pre-pandemic times without present restrictions, there would have been a standing-only crowd here for Father’s funeral Mass.

I wish to acknowledge in the sanctuary the presence of another student of Fr. Reggie, Archbishop Jerome Listecki of our Archdiocese of Milwaukee. Archbishop, we know of your great esteem for Fr. Reggie, having studied Latin with him for four years during your postgraduate years in Rome. We Carmelites are grateful that you join us today. And I wish also to acknowledge Fr. Daniel Chowning of our own province, a Definitor General of the Order serving in Rome, who also represents our Superior General, Fr. Saverio Cannistrà. Fr. Daniel, we are pleased that you are here for Fr. Reginald’s funeral and that you bring the condolences of Father General.

Let me finish this lengthy introduction by reading aloud the telegram of Our Holy Father, Pope Francis, sent through the Office of the Secretariat of State to our Father General. Father Reginald had worked in the Latin Language Office of the Secretariat of State for forty years. And, of course, the original text of telegram was written in LATIN. I am grateful for an English translation provided by Fr. Dan McCarthy, OSB, a dear friend of Fr. Reginald and coauthor of their work, Latinitatis Corpus.

THE SUPREME PONTIFF, FRANCIS,
HAS RECEIVED NEWS THAT FATHER REGINALD FOSTER, O.C.D.,
HAS DEPARTED FROM THIS WORLD TO PASS OVER TO THE FATHER’S HOUSE,
REGINALD WHO COMPLETED VERY MANY YEARS IN THE SECRETARIAT OF STATE,
AND WHO BRIGHTENED INNUMERABLE PONTIFICAL DOCUMENTS
WITH LATIN’S SPLENDOUR…
WHICH HE, UNREMITTING, ALSO HANDED ON ABUNDANTLY AND PLENTIFULLY
TO HIS MANY RETURNING STUDENTS,
AND THE HOLY FATHER HIMSELF PRAYS
THAT FR. REGINALD, FILLED WITH MERITS,
MAY RECEIVE A REWARD FROM THE LORD IN A FULL MEASURE.

Dear friends, there have been numerous articles and obituaries that have been written about Fr. Reginald in the past two weeks concerning his extraordinary career as a brilliant Latinist who served four popes, his often-gruff, no-nonsense manner and impatience with ecclesiastical pomp or concern with appearances, and his readiness to give you his opinion, regardless of in what place or in whose company he stood. That he was unique if not iconoclastic as he walked all over Rome in his J.C. Penney’s “dress blues.” Or else how he was a dedicated teacher who tirelessly taught countless students over the course of some 35 years in Rome, offering “experiences” rather than “classes” and then continuing another eleven years back in Milwaukee, in the classroom or by correspondence or videoconferencing.

I did not have the opportunity to study under Fr. Reggie or to enjoy one of his magnificent tours of the Vatican or the Roman Forum. But becoming more acquainted with some of the details of Fr. Reggie’s life during the past month since his death has afforded me the opportunity to better appreciate him through a different lens concerning his passion for God, the Church and his love of teaching Latin.

His mom and dad, Margaret and Gordon, were married right here at Holy Hill by Fr. Corbinian in June of 1930. At the time, all the entries for sacramental registry of the parish of St. Mary of the Hill were written in German, since the friars were from Bavaria. But oddly enough, the entry for Reginald’s parents’ wedding was written in LATIN. His dad was a plumber as was his grandfather. Known then by his baptismal name of Thomas, he entered St. Francis Minor Seminary in Milwaukee at the age of 13, where his pastor Fr. Bronner at St. Anne’s parish attested that in Tom’s second year there “he had the highest marks the Seminary ever gave in its entire history” (Fr. W. Bronner to Carmelite Novitiate, April 12, 1955). At age 14 he decided to seek admission to the Discalced Carmelite minor seminary in Peterborough, NH. Fr. Bronner wrote to the friars: “he is a little more religious in his practices of devotion than boys ordinarily are. He often spends many hour[s] a day in church in prayer. He is not excentric [sic], however. …[I] feel privileged to recommend him. I feel confident that you will find him a desirable student” (ibid.).

Reginald himself, at age 15, wrote in a letter to the friars why he wanted to enter the Carmelite seminary, saying: “I figure it is exactly what God has cut me out for. Nothing else could satisfy me now but your order, the order of Mary, the order of Mount Carmel. There is so much beautiful history behind your order; there is so much joy and contentment behind closed doors of the monastery, but this is all for me. … Nothing could please me more or help me to please God more than living the Carmelite way” (Letter to Fr. Peter-Thomas Rohrbach, 1955, [before Sept.]). Fr. Reginald would say repeatedly throughout his life that he appreciated the aspects of both solitude and community life within the Order.

Concerning his passion for the Latin language, I came across a most extraordinary letter which Fr. Reginald wrote to his provincial in December 1966. He was 27 years old and only ordained a priest not quite eight months. It was almost exactly a year after Second Vatican Council had come to an end, and he writes that he was “troubled because of the terrible uncertainty of the future.” Frankly, he was fearful at that time that he would soon be asked (without any further consideration) to go on for a doctorate in theology following his licentiate. He wrote: “If the superiors … decide on that, I will have to obediently satisfy this obligation first, before anything else that may be in view. What my one concern is at the present, my study, my interest, love, hope, ambition, my life in so many ways for the glory of God, the good of the church and the honor of the Order is in one word LATIN” (Letter to Father Provincial, Rome, December 1, 1966). He goes on to ask to whether it would be possible for him to study at the newly-founded Pontifical Latin Institute dedicated by Pope Paul VI.

Clearly, Reggie’s draw to the Latin language was for him vocational. And the language was not about dead letters but rather something revelatory concerning the mystery of our humanity, a wisdom which could be discovered in the experience of human beings across centuries and millennia. Reggie was a man passionate about the beauty of the Latin language. He seemed also to revel in Latin’s capacity as a language to express what is real in our human experience, and thus, WHAT RELATES US TO ONE ANOTHER as human beings. Whether the words were written on the walls of an ancient church or chiseled onto columns of the Roman Forum or even on the walls of a first-century lavatory, those written words could lead one to reflect and to identify with others’ experience. It is fair to say, too, that he reveled in leading his students to comprehend and to better appreciate, by various Latin texts they translated, what it means to be human. To be awed by it and to be humbled by it, to be humored by it and to be changed by it.

It seems most fitting that Fr. Reginald “passed over to the Father’s house” on Christmas precisely when the Church celebrates the birthday of the Word Made Flesh, when the One, through Whom all things in heaven and on earth were made, assumed our humanity and became one of us. What can be more real than this? And who can better show us the truth and the meaning of who we are as human beings?

A beautiful email was recently shared with me, sent by our Carmelite nuns in Rome, to acknowledge Fr. Reggie’s death. The nuns wrote: “We remember him very fondly. He came to celebrate Christmas Mass or chant the Exsultet at the Easter Vigil. His love for poverty, especially the poverty of Jesus in the manger, was overwhelming. It seems to be a sign of Jesus’ love for him, the fact that he entered eternal life on Christmas Day.”

Those who had visited him in Rome would be struck by the austerity of his workspace, a closet-sized office with manual typewriter and Latin dictionary on his desk and walls lined with paper-bag covered books. But just as astonishing was how much time he would generously offer to those visiting him, even while doing all of his translation work in the Vatican and teaching hundreds of students and correcting their homework daily.

Those who knew Fr. Reginald were well aware of his rough edges and the places of personal struggle, his occasional growling with some discontent. He was fiercely determined to live as he believed and no doubt often experienced the pain of loneliness in being set apart. I think that, as a man with a brilliant mind and single-minded passion, desirous to live a life of integrity, but keenly aware of life’s incongruities, Reginald wrestled at times with his own humanity and with remaining patient in his longing for beauty and for truth. Still, he remained a man of hope and he found strength and great solace in his friendships with others. His passion for teaching Latin has been caught by countless students who now in turn educate new generations of Latin learners.

Today, as we celebrate his funeral Mass, we recall the beautiful words of St. John’s Gospel: “In my Father’s house there are many dwelling places.” Christ Jesus promises us that there is an answer to the deepest longing of our hearts, the desire for beauty and for truth, the hunger for communion with others, to understand and to be perfectly understood. The Lord drew Fr. Reginald in all his zeal to seek after Him. Now we, his Carmelite brothers his family members and friends, pray and entrust his soul to Christ whom he followed faithfully as “VIA ET VERITAS ET VITA.” Requiescas in pace, Frater Reginalde.