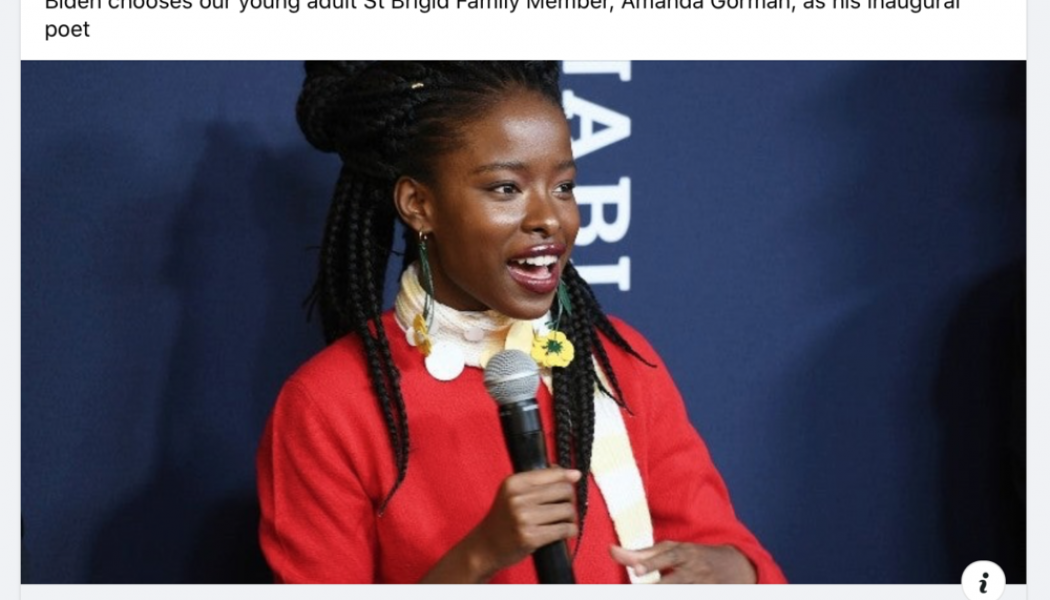 After Inauguration Day, everyone was buzzing — obviously — about weary Sen. Bernie Sanders and his mittens, as well as Lady Gaga’s massive social-distance enforcing dress. Commentators explored the socio-political importance of the various shades of purple worn by female Democrats, while Garth Brooks raised eyebrows with blue jeans and maskless-hugs of assorted presidents.

Oh, and President Joe Biden belted out an address that was Bill Clinton-esque in terms of length.

But there was no question that the day’s rising star was Amanda Gorman, the young poet in the canary-yellow coat who certainly didn’t throw away her shot. The question, for GetReligion readers, was whether there was a religion angle in her work that meshed with the rest of the Inauguration Day celebration of the Gospel according to the Religious Left.

Anyone with a computer-based device and a search engine could easily learn that the answer was, “Yes.”

As one would expect, the New York Times offered the definitive faith-free story: “Amanda Gorman Captures the Moment, in Verse.” Now, it was totally valid that the overture underlined the role that the January 6th conspiracy-theory apocalypse played in the creation of the poem. The question is whether this young Catholic woman’s faith was part of her response to it.

Two weeks ago, the poet Amanda Gorman was struggling to finish a new work titled “The Hill We Climb.” She was feeling exhausted, and she worried she wasn’t up to the monumental task she faced: composing a poem about national unity to recite at President-elect Joseph R. Biden Jr.’s inauguration.

“I had this huge thing, probably one of the most important things I’ll ever do in my career,” she said in an interview. “It was like, if I try to climb this mountain all at once, I’m just going to pass out.”

Gorman managed to write a few lines a day and was about halfway through the poem on Jan. 6, when pro-Trump rioters stormed into the halls of Congress, some bearing weapons and Confederate flags. She stayed awake late into the night and finished the poem, adding verses about the apocalyptic scene that unfolded at the Capitol. …

At one point, this Times piece came close to exploring the DNA of key passages in her poem. Of course, the “Hamilton” influence was relevant (hold that thought). Then there was this:

Gorman began the process, as she always does, with research. She took inspiration from the speeches of American leaders who tried to bring citizens together during times of intense division, including Abraham Lincoln and the Rev. Dr. Martin Luther King Jr.

But that was that.

The Associated Press report came closer, in the report (“Inaugural poet Amanda Gorman: ‘Even as we grieved, we grew’ “) that would have reached ordinary news consumers outside elite zip codes. Here is the overture on that news feature:

NEW YORK (AP) — The country has a new president and a new literary star. In one of the inauguration’s most talked about moments, poet Amanda Gorman summoned images dire and triumphant Wednesday as she called out to the world “even as we grieved, we grew.”

The 22-year-old Gorman referenced everything from Biblical scripture to “Hamilton,” and at times echoed the oratory of John F. Kennedy and the Rev. Martin Luther King Jr. With urgency and assertion she began by asking “Where can we find light/In this never-ending shade?” and used her own poetry and life story as an answer. The poem’s very title, “The Hill We Climb,” suggested both labor and transcendence.

At that point, I thought AP would explore the rest of that equation. But, no.

If you wanted to know more, you needed to turn commentaries at niche media that serve religious liberals of various kinds — such as Sojourners, America or Religion News Service. For non-Donald Trump evangelicals, there was an insightful piece at Christianity Today.

I was somewhat amused that the National Catholic Reporter missed the Catholic angle of this story, but them corrected itself with a strategic correction:

Amanda Gorman, a National Youth Poet Laureate, delivered a poem that was stunning in its energy and beauty. The poise of one so young could not have contrasted more starkly from the images of the crude and crass Trump backers who had defiled the Capitol during the insurrection. Her words spoke of healing and, like a sacrament, they effected what they signified. Gorman is a star, and her performance at the inaugural will be remembered for many years when her future artistic efforts capture our hearts again. She may not be Catholic, but I think of her now as an honorary Catholic.*

That asterisk pointed to this:

* Editor’s note: After publication of this column, NCR learned that Gorman is Catholic and a member of St. Brigid Church in Los Angeles.

As it turned out, Gorman was a perfect fit for the day — a brilliant Ivy League woman of color whose popular-culture-edged work suggested that her Catholic faith resonates with Biden’s own intense, personal and Catechism-optional commitment to progressive culture, including a strong commitment to abortion rights.

Amanda Gorman performs a poem in support of abortion rights.

Sadly, she never once considers the humanity of the unborn.

Instead, she offers a virulent argument that it should be legal to kill unborn babies at any point during a pregnancy.https://t.co/YeWo5Cn2wM

Amanda Gorman performs a poem in support of abortion rights.

Sadly, she never once considers the humanity of the unborn.

Instead, she offers a virulent argument that it should be legal to kill unborn babies at any point during a pregnancy.https://t.co/YeWo5Cn2wM

The Catholic Outlook offered the most intense take on her day in this feature: “Amanda Gorman: Poet Laureate, bestseller, Ivy Leaguer and Black Catholic.”

In an inauguration ceremony saturated with the faith, there was one hidden Catholic figure that slipped even my own eye.

Most of the world knows that President Biden is a practising Catholic, and also that Kamala Harris was also sworn in by Catholic Supreme Court Justice Sonia Sotomayor. Many are even aware that Lady Gaga, perhaps the day’s principal musician, is known to attend Mass as well.

But contrary to my claim yesterday that no notable Black participants in the proceedings are Catholic, the reality is that the nation’s youngest poet laureate (and newest celebrity best-seller), Amanda Gorman, is.

Yes, despite the media and the masses alike being unaware, the best-dressed lady of the day, speaking the day’s best words, is herself a Mass-going practitioner. Her parish, St Brigid’s in Los Angeles, is even staffed by the Josephites, the society of priests founded to (and who still) serve African-Americans as a rule. (A priest in the society reached out to me with the news, circulated in an email this morning from a diocesan priest in New Orleans.)

However, the best analysis of the key faith content in Gorman’s reference came from The Forward, a progressive Jewish website. See: “Amanda Gorman’s Bible quote endorses religious liberty — but it’s still from the Bible.”

This is the piece that you need to read.

Right at the top, there is this — a passage that is long, but essential:

Amanda Gorman, the 22-year-old National Youth Poet Laureate, shot into the spotlight instantly after she recited her powerful poem “The Hill We Climb” for Joe Biden’s inauguration. Her words, her Prada headband and her “Hamilton” references all drew chatter online; she tweeted that she is a big fan of the musical about the nation’s founding.

The “Hamilton” reference, however, is itself a reference, which quotes a prophetic promise repeated in Micah 4:4, Zechariah 3:10 and 1 Kings 5:5. “Scripture tells us to envision that everyone shall sit under their own vine and fig tree and no one shall make them afraid,” Gorman said on the inaugural stage. The same biblical line about figs and vines is also featured in Lin-Manuel Miranda’s musical because George Washington cited it in his famous letter to the Hebrew Congregation in Newport, Rhode Island.

In its context in Micah, the line describes peacefulness following violence and suffering in a country that has finally found its way back to God. Each farmer can have their own plot of land, without worrying about destruction to their well-being and sustenance. In Zechariah and 1 Kings, it also refers to a new and prosperous time after suffering.

Quoting Jewish scripture to a Jewish congregation was likely meant by Washington to show that the Jewish community would be welcomed and respected on their own terms in a country where they could be full citizens. They would be able to prosper on their own land, in contrast to their former homes in Europe, where Jews were often not allowed to own land, and were tolerated at best and persecuted at worst. Washington was trying to emphasize the importance of religious liberty in the new country.

Gorman’s use of this line during the inauguration could also be understood as an acknowledgement of the religious liberty allowed to each citizen of this country.

So what is the key journalism point that needs to be made?

Many journalists grasped that Biden’s ver American Catholic faith played a key role on Inauguration Day. I was surprised that the biblical reference — especially since it was linked to “Hamilton” — zipped right past the scribes writing about Gorman’s star turn.

Honest. I was surprised, because this latest surge of power on the religious left is a big story.