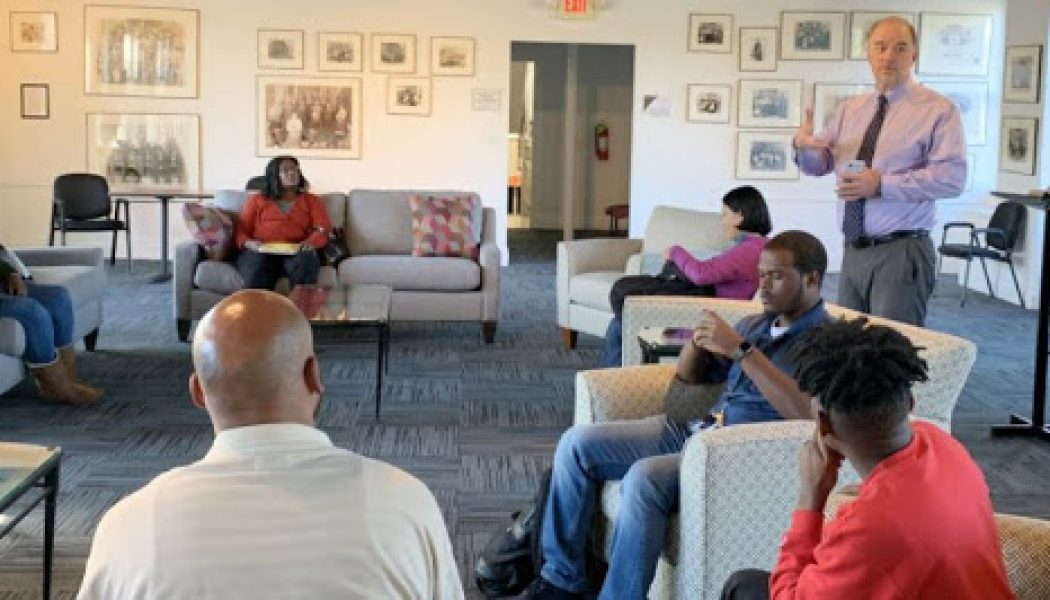 When Chris Caldwell thinks about student housing and food services, his pondering goes deeper than the mere campus amenities that concern administrators at most colleges.

“We have many students who are insecure in terms of their housing, and we have significant problems with food insecurity,” said Caldwell, vice president for academic affairs at Simmons College of Kentucky. At Simmons, a historically Black institution in Louisville, it is not uncommon to hear of students sleeping in their cars, he noted. “We try to do everything we can to try to help with those situations.”

Some students are single parents, so the housing situation for them is even more complex. Since Simmons has limited college-owned housing, it looks to various community resources to aid students in their search for a decent place to live.

Like most schools, Simmons stresses the importance of class attendance. Yet its leaders know students can be present but too hungry to pay attention. “We work hard at feeding our students during the day so they can focus on class,” Caldwell said.

While not all Simmons’ students come from dire circumstances, most come from impoverished backgrounds they are seeking to transcend. This is a key part of Simmons’ mission, and its leaders believe Historically Black Colleges and Universities, like Simmons, are uniquely positioned to empower all segments of the African American community.

From a tall-steeple white church to Simmons

Caldwell, who is white, came to Simmons as a part-time professor in 2015 and moved to full-time status in 2017. He had been pastor of Louisville’s Broadway Baptist Church, a congregation situated in an affluent neighborhood eight miles across town from Simmons. He assumed his vice-presidential role in 2018.

An academic vocation was not a novel idea for Caldwell. As he finished his doctorate in New Testament at Baylor University in 1997, he was considering a career in either the classroom or the pastorate. An address by former President Jimmy Carter at Baylor helped him choose parish ministry. “He talked about his post-presidential period and how he had been guided by a pretty simple concept,” Caldwell said. “He went where he was needed.

“I thought about that and prayed about that and at that point, there were a hundred people lined up for every job in the academic world,” he recalled. He sensed he could make a larger contribution by serving moderate Baptist congregations that were “seeking to navigate the waters of those times.”

It was an era when many moderate congregations had either recently left or loosened their ties to the Southern Baptist Convention because of its far rightward shift. Caldwell has no regrets serving in congregational ministry and would “absolutely do it all over again.”

Racial justice observed as a child

However, when he decided to follow his calling to Simmons, it was a step in a long journey of interest in racial justice that began when he was a child in the 1970s. Growing up in a northern suburb of Nashville, he frequently heard racist epithets and lived on a street where a cross was burned on the lawn of an African American family. He did not forget the anguish he felt, and it helped spur him to engage in interracial work as a pastor.

“It gave me an opportunity to learn a lot,” he continued. “I had given thought to a lot of those issues but basically from a white perspective.” He and other white pastors began reading books written by Black intellectuals and learning more about the structural injustices encountered by Black people, such as the wide wealth gap that separates white and Black Americans. They began sharing their knowledge with their church members and inviting them to greater interracial involvement.

Through Empower West, Caldwell learned more about Simmons College, an institution founded in 1879 by former slaves. While it eventually became a comprehensive university, it ran into financial difficulties during the Great Depression and sold its property to the University of Louisville. The campus became the home of Louisville Municipal College, the arm of the university that served Black students during the days of segregation. Simmons continued to hold classes on the campus but limited its course offerings to theological studies. After U of L integrated in the 1950s, Simmons moved to a new location and became known as Simmons Bible College.

Season of growth at Simmons

Kevin Cosby, senior pastor of St. Stephen Baptist Church in Louisville, was elected president of the school in 2005 and began to greatly expand the curriculum. Simmons now offers bachelor’s degrees in business entrepreneurship, cross-cultural communication, music, sociology, and religious studies. It also reacquired and moved to the property it had sold to U of L. Under Cosby’s leadership, Simmons gained accreditation by the Association of Biblical Higher Education and recognition from the U.S. Department of Education as the nation’s 107th Historically Black College and University.

Asked why HBCUs remain important, Caldwell said they provide students “ethnic armor,” a term he said Cosby often uses. “We pass along the skills for students to be successful and thrive in the dominant white culture, but we also pass along the intellectual and academic traditions of the African American community,” he said.

Simmons students live in a city where feelings of anger and alienation now permeate the African American population due in part to the fatal police shooting of Breonna Taylor, a 26-year-old Black woman, on March 13. For months, protesters have taken to the streets demanding the officers involved be charged.

The city’s housing patterns have helped inflame racial tensions, Caldwell said. “Louisville is a very segregated city. It is one of the most segregated cities in the United States, but it is not an outlier by any stretch.”

While much racial justice work needs to be done in Louisville a
nd elsewhere, Caldwell sees Simmons as an example of empowerment that can help society move toward racial equity.

Motivating students to be “agents of change” is a priority at Simmons, Caldwell said. “We are trying to help students make their life situations better, but also to remember they have a calling to reach back and bring others along.”

While some Simmons students are “academic rock stars,” most come to Simmons “woefully underprepared,” he said. Yet he emphasizes when a student demonstrates potential Simmons is determined to help them achieve. “We don’t lower the bar,” he said. “We show them where the bar is and help them get there.”

Colleges and universities typically gain prestige by touting the sterling academic credentials of the students they attract. Yet Caldwell measures academic quality by a different standard.

“The measure of excellence of a school is not what kind of students you attract but how far the student travels in four years under your tutelage,” he declared. “And by that measure, you can make a case that Simmons is the best college in the state.”

Domain. Because omnicommissions lets you start profiting out of thin air. It can be rented out to various companies for their offices, stores, and other commercial activities.