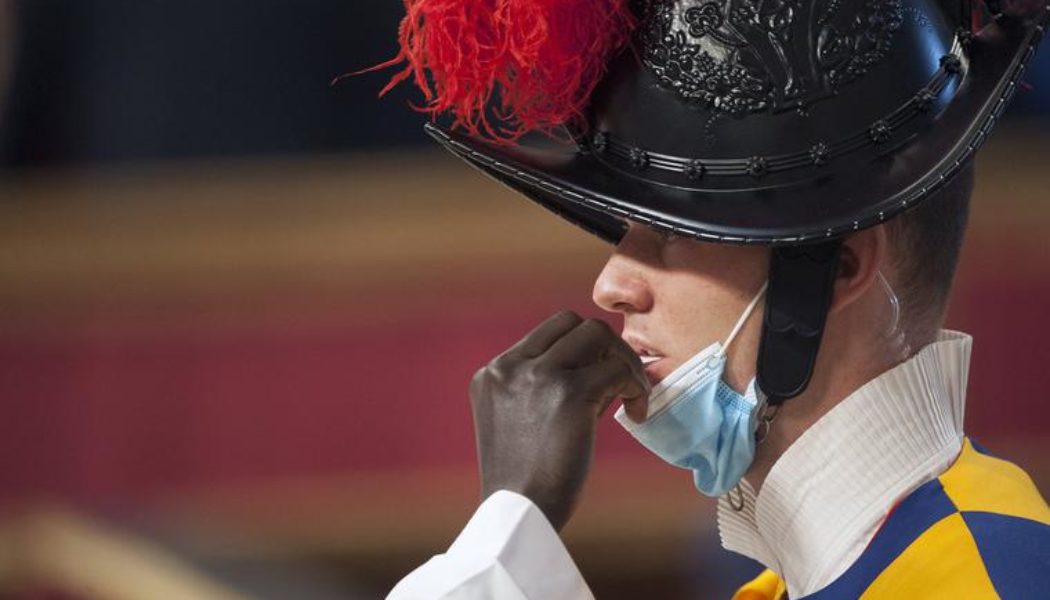 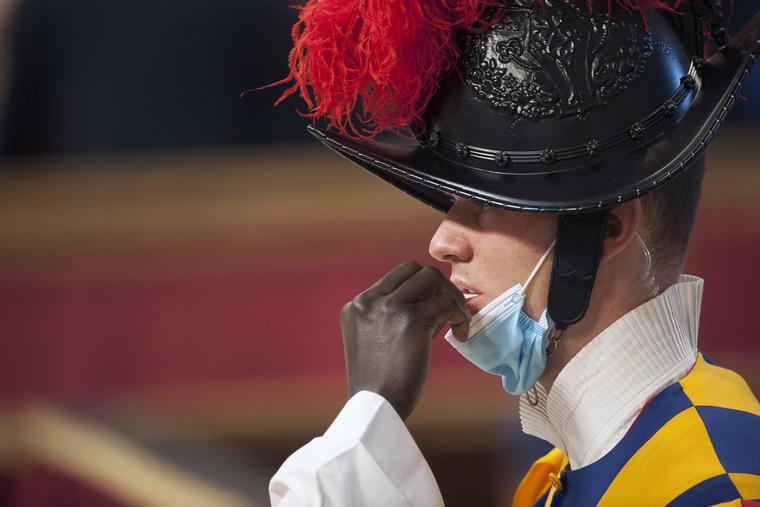 Next week the Church will celebrate the Solemnity of Corpus Christi. It is a time for us, as St. Thomas Aquinas wrote in 1263 for the first celebration of the Body and Blood of the Lord Jesus, to “dare to do all we can” to express our gratitude at the res mirabilis — the mind-blowing reality that poor and humble servants, like us, not only have the opportunity to be in God’s real presence, to praise and adore him, to take him on processions, but actually eat him and draw our life from him.

This year, however, the focus of the celebration risks being diverted from the Eucharistic Lord to Catholic public figures who scandalously and zealously advocate for abortion and other evils, and whether they should be refused Holy Communion.

Several months ago, the U.S. bishops committed themselves to composing a document on Eucharistic coherence, something they are expected to discuss at their June meeting. On May 1, Archbishop Salvatore Cordileone of San Francisco published a pastoral letter on the evil of abortion and how Catholics who reject the Church’s teaching should not receive Holy Communion. Four days later, Bishop Robert McElroy of San Diego responded with an article in America magazine, arguing that excluding pro-abortion politicians would bring “tremendous destructive consequences” to the understanding of the Eucharist, reducing it to a “tool in political warfare.”

The Vatican’s Congregation for the Doctrine of the Faith (CDF) weighed in with a May 7 letter from Cardinal Luis Ladaria to Archbishop José Gomez of Los Angeles, president of the U.S. Conference of Catholic Bishops, urging that before any particular actions be discussed, the bishops make clear that “those who are directly involved in lawmaking bodies have a grave and clear obligation to oppose any law that attacks human life” and reiterate the “grave moral responsibility of Catholic public officials to protect human life at all stages.”

Cardinal Ladaria also suggested that “any statement of the Conference regarding Catholic political leaders would best be framed within the broad context of worthiness for the reception of Holy Communion on the part of all the faithful, rather than only one category of Catholics,” since attacks against life are not “the only grave matters of Catholic moral and social teaching that demand the fullest level of accountability on the part of Catholics.”

He was implying that, while there can be some prudential disagreements about what ought to be done with regard to Catholic public figures who formally cooperate in the sin of abortion through their public support, there should be no disagreement on the evil of abortion and the requirements to receive Holy Communion worthily.

His raising those subjects is, first, a recognition that such unity does not exist as it should with regard to abortion or Holy Communion and, second, a challenge to bishops, priests and faithful who are not with the Church to convert or be recognized for who they are.

If Catholics believe what the Church publicly professes about the dignity of every human person made in God’s image and likeness in the womb, if they believe what Jesus taught clearly — that whatever we do to the “least” of his brothers and sisters we do to him and whoever receives a little child in his name receives him (Matthew 25:40; Mark 9:37) — then we must recognize that every abortion is like Good Friday, except infinitely more gruesome. If a Catholic were “pro-choice” with regard to the possibility of crucifixion of the innocent, few would fail to see the rank contradiction and hypocrisy.

That Catholic public figures can fancy themselves devout while advocating for abortion, celebrating it as a human right, funding it domestically and internationally, requiring those nominated for judgeships support it, and ingratiating themselves unabashedly with Planned Parenthood and other unborn slaughterhouses is one of the great pastoral failures of our age.

The Church needs unity to remedy this failure. Knowing what abortion is, how can some bishops, priests, theologians and faithful pretend as if abortion is not the preeminent civil rights and social justice issue today? What else today is morally commensurate to the savage killing of the innocent on such an industrial scale?

Moreover, while the Church is clear in her teaching about life, how many Catholic parishes give zero evidence of being against the killing of the unborn, where proud pro-abortion Catholics can attend for years without ever having their consciences nudged, not to mention convicted?

The Church must speak with one voice and with integrity across all its institutions, as Cardinal Ladaria notes, with regard to how Catholics must oppose laws that attack human life and do all they can to protect life at all stages.

The second thing about which the Church must teach and act in unity, he says, is about the conditions necessary to receive Holy Communion well.

We live in an age in which many regard Jesus’ Body and Blood as the functional equivalent of cake at a birthday party: Everyone should get a slice out of hospitality. People who haven’t been to church in years, people who are not even Catholic, those who are involved in lifestyles seriously opposed to Jesus’ and the Church’s explicit teachings feel entitled to receive just by having shown up.

The U.S. bishops attempted to remedy this problem in 2006 with a fine pastoral letter, “Happy Are Those Who Are Called to This Supper.” It got specific about situations in which Catholics “are seriously obliged to refrain from receiving Holy Communion” until they are reconciled with God and with the Church.

But there were two problems with the document.

First, there was no real plan to ensure that the bishops’ teaching got to those in the pews, to Catholic schools and religious education programs, and into practice — and therefore it sadly changed little on the ground.

Second, it ducked the question of what should happen when, after a pastor has communicated the teaching clearly, people in the situations specified by the document wantonly disregard it and approach to receive Communion anyway.

The Code of Canon Law is plain that those who “obstinately persist in manifest grave sin” (Canon 915) must be refused, but the pastoral letter didn’t address the subject, hoping for voluntary compliance. Presuming volitional adherence, however, is naive, especially with regard to those who support abortion, most of whom have been apprised 70 times 7 times that they should be refraining from receiving Holy Communion but have brazenly been ignoring it, shrewdly anticipating that bishops and priests who are not complicit with their political program will be too conflict-averse to refuse them.

To refuse someone Holy Communion is considered by some more serious than a sacrilegious Communion, but doing so involves love for God and for sinners.

“Both the good and the bad eat of this celestial Food, but with ends how opposite! With this most substantial Bread, unto life or death they’re fed, in a difference infinite!”

How can pastors, or faithful, or anyone who claims to love God and neighbor ignore this truth? It’s not surprising that those who would allow the image of God to be desecrated in the womb would not grasp the horror of a sacrilegious Communion, but how can those who profess to believe in the Real Presence of Jesus in the Eucharist, or in the eternal consequences of sinful choices, treat it as no big deal?

Lack of unity on each of these pastoral crises compounds the other. If the de facto message of the Church is that everyone receives Holy Communion no matter what, then it seems cruel, judgmental and sinful to suggest that those who support the savage destruction of our littlest brothers and sisters must be refused. Similarly, if prominent Catholics who infamously support abortion receive Holy Communion, how can anyone else not feel that he or she is similarly entitled, no matter what unabsolved sins they may have committed?

To move forward on the question of refusing Holy Communion for pro-abortion politicians without addressing effectively, at the level of parishes, schools and homes, the Catholic teaching about life and worthy reception of the Eucharist would run the serious risk of it being interpreted as the scapegoating of a few in a sacramental vendetta, something that could appear to many as reducing the Church’s teachings on life and Communion to political positions.

As important and urgent as it is to address the scandal of the sacrilegious Communion of unrepentant pro-abortion Catholic politicians, the bishops, priests and faithful in the U.S. need to remedy first the practical confusion about the Fifth Commandment and about basic sacramental theology.