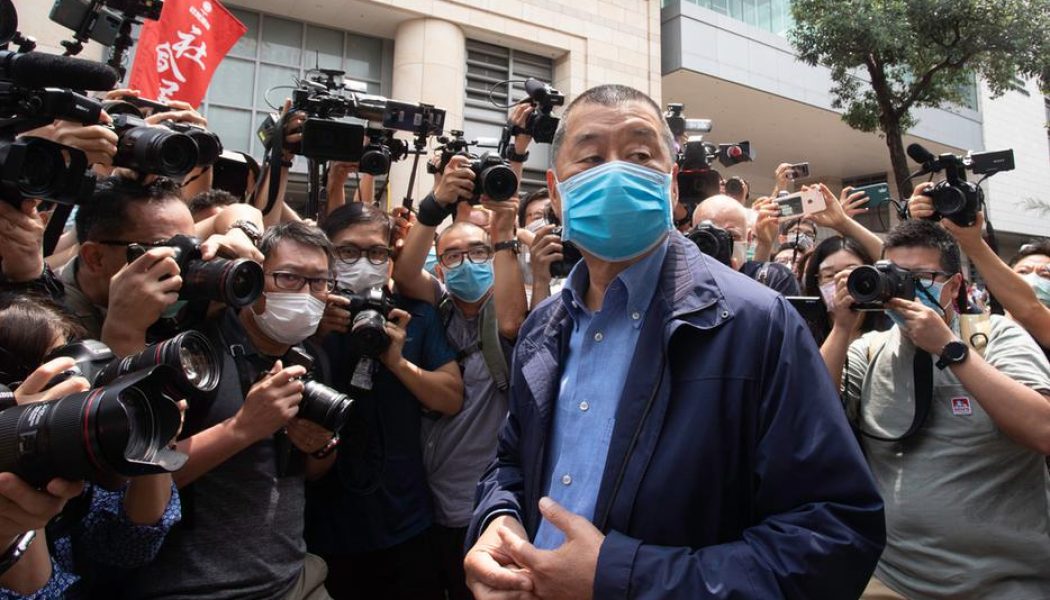 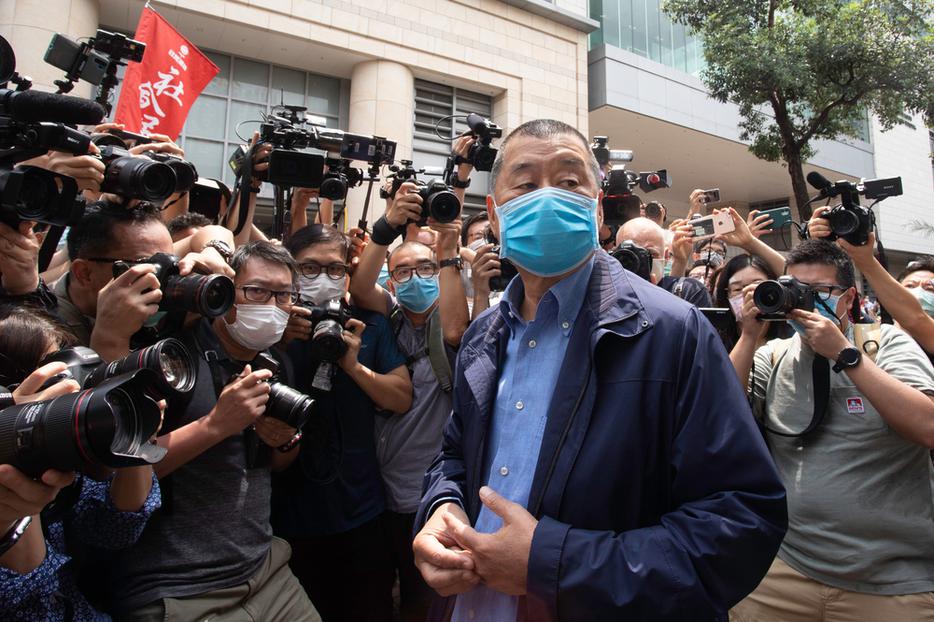 HONG KONG — A recently arrested Hong Kong entrepreneur and media executive said this week that he plans to stay in Hong Kong to face criminal charges stemming from his support for democracy on the island territory. The executive, Jimmy Lai, said that the Chinese Communist Party wants to supplant religion with government control.

“When you lift yourself above your own self-interest, you find the meaning of life. You find you’re doing the right thing, which is so wonderful. It changed my life into a different thing,” Jimmy Lai said in an Oct. 5 interview.

The interview was conducted by Fran Maier, a senior fellow at the Ethics and Public Policy Center and senior research associate at the University of Notre Dame. It was produced and released by the Napa Institute, of which Maier is a board member.

Lai, a Catholic, said he has supported the Hong Kong pro-democracy movement for the past 30 years, because of “the Lord’s teaching that your life is not about yourself.”

“The way I look at it, if I suffer for the right cause, it only defines the person I am becoming. It can only be good for me to become a better person. If you believe in the Lord, if you believe that all suffering has a reason, and the Lord is suffering with me…I’m at peace with it.”

A band of nearly 200 police officers arrested Lai on Aug. 10, along with at least nine others connected to Apple Daily, the newspaper Lai founded in 1995, as part of an apparent crackdown on civil liberties in the island territory.

Apple Daily has distinguished itself over the years as a strongly pro-democracy publication critical of the Chinese government in Beijing.

Lai is out on bail, but faces charges under Hong Kong’s new national security law, which took effect July 1, when it was imposed on the territory by the Chinese Communist Party, bypassing the Hong Kong legislature.

Under the new law, a person who is convicted of secession, subversion, terrorism or collusion with foreign forces will receive a minimum of 10 years in prison, with the possibility of a life sentence.

Lai came to Hong Kong at age 12 as a stowaway, penniless, from mainland China. His mother spent the early years of Lai’s life in a labor camp. In Hong Kong, Lai saw a need for affordable, quality clothing for middle-class people, and founded a chain of clothing stores called Giordano’s— a venture which would make him rich, and allow him to launch pro-democracy magazines and newspapers in Hong Kong and Taiwan.

Lai is a British citizen, but he said he does not plan to leave Hong Kong. He said his family is very supportive of his decision to stay, but he fears for their safety.

“I am what I am. I am what I believe. I cannot change it. And if I can’t change it, I have to accept my fate with praise.”

Lai said his wife has always been a pious Catholic, and even before his conversion he always went to church with her. But in 1997, he realized that he needed the protection and help of a higher power. He was baptized and received into the Church by Cardinal Joseph Zen, bishop emeritus of Hong Kong.

Hong Kong has historically enjoyed freedom of religion, unlike mainland China, where religious believers of all stripes endure persecution. The Catholic Church in China has since 1951 been split between the so-called underground church, which is persecuted and loyal to Rome, and the state-sanctioned Chinese Patriotic Church.

Lai said China needs moral leadership from the Vatican, but he expressed disappointment in the Vatican’s negotiations with CCP, particularly the Sept. 2018 agreement between the Vatican and the CCP on the appointment of bishops, which the two parties are expected to renew later this month.

The Vatican’s power is moral and virtuous rather than temporal, Lai said. The Vatican should uphold moral values when they need it the most, he added.

When the pope and the Vatican remain silent on the CCP’s actions, “that is very disappointing, very damaging, for a world that looks up to the Vatican for their moral leadership.”

Lai said in his opinion, the West erroneously thinks of China that “the richer they become, the more they will be like us.”

But values are important, Lai said, and the CCP’s behavior is threatening Christian values, extending their influence into international spheres like Hollywood and professional sports.

The COVID-19 pandemic, Lai said, is a “Pearl Harbor event” for the world, which ought to shake the world out of complacency.

“The issue we are facing now is: China is going to be the most powerful, economically, in the world. Now is the time for us to change China’s attitude…otherwise they will change us to theirs.”

Morality and values are where the CCP are most vulnerable, Lai said, because the CCP does not just want to eliminate God, they want to “be” God.

Chinese President Xi Jinping wants to be respected as all-powerful, and that is why the CCP seeks to control religion, he said.

That the CCP wants to supplant religion is a “moral perversion,” Lai said, aiming to see people “suffer for [Jinping’s] sins.”

“Once you don’t have a religion, you can easily be dictated by their order,” he said.

Catholics have been strongly involved in pro-democracy protests in Hong Kong, which came to a head during summer 2019.

“Our instinct urges us to stand up to injustice, to evil. I think this is just an instinct. Being a Catholic, you have the instinct to stand up [to] what is wrong, because that’s the way we walk in the way of the Lord,” Lai observed.

In Hong Kong and in mainland China, Christians are looking to the Vatican for moral leadership, Lai said.

“The Vatican can only depend on its virtue and moral power to convert the Chinese people from the dictatorship of atheism. Chinese people are looking for faith, in addition to their material life. Where they lack is not material, because China has certainly improved people’s wealth and livelihood in the last 40 years. The greater material success they have, the more of a void they feel in their heart,” Lai said.

The moral vacuum in China is an opportunity for Catholicism to fill in, Lai said, to teach people that “life is more than just bread.”

Chinese people, he said, “want religion, the more they want virtue and morals, to live a meaningful life— which the Vatican is not giving them. Which the Vatican is taking away from them when they align with the CCP, who has repressed them in their spiritual pursuit. This is really ridiculous. This is something very disappointing.”

Hong Kong is a “special administrative region” of China, meaning it has its own government but remains under Chinese control. It was a British colony until 1997, when it was returned to China under a “one country, two systems” principle, which allowed for its own legislature and economic system.

Hong Kong’s openness to the outside world, and transparency in business and banking regulation, in contrast to mainland China, has made it a center of global business, banking, and finance.

Pro-democracy protests in Hong Kong — in which many Christians and Catholics participated — successfully rebuffed the legislature’s efforts last year to pass a controversial bill that would have allowed mainland China to extradite alleged criminals from Hong Kong.

With the passage of the new security laws, the Communist Chinese government seized more power to suppress the protests in Hong Kong, which it sees as a direct challenge to its power.

Similar security rules have been proposed before; in 2003, the Communist government attempted to use Hong Kong’s own legislative and executive councils to pass the anti-sedition measures, but massive protests led lawmakers to abandon the proposal.

On May 27, the US Department of State announced that, in light of China’s actions, it no longer recognizes Hong Kong as politically autonomous from China — a designation the region has enjoyed under US law since 1992.