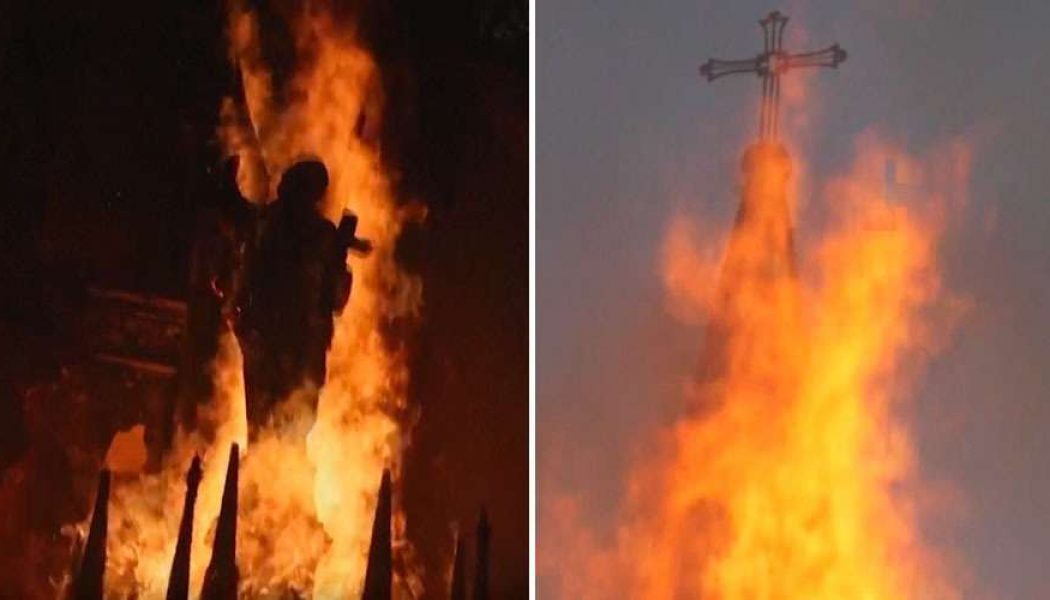 The Archbishop of Santiago de Chile condemned arson attacks that destroyed two Chilean churches Sunday, and called on Catholics to carry out acts of reparation for the attacks.

📹VIDEO | On Sunday, Oct. 18, groups of hooded protesters entered two of the oldest churches in #Chile’s capital city, setting fire to the St. Francis Borgia Church and to the Church of the Assumption.
Read more: https://t.co/OMQIpeZHlT#Catholic pic.twitter.com/l4reQ5rS99

On Oct. 18, groups of hooded protesters entered two churches in Chile’s capital city, setting fire to the St. Francis Borgia Church, which is the church of the country’s national police force, and to the Church of the Assumption of the Blessed Virgin Mary. Both churches are among the oldest in Santiago.

The spire of the Church of the Assumption collapsed as the church burned, drawing cheers from demonstrators protesting outside the building. The interior of the St. Francis Borgia Church was gutted by the fire, and both buildings may be beyond repair.

The attacks came as demonstrators across the country called for a constitution, and marked the one year anniversary of large anti-government protests that took place across Chile last year, during which riots destroyed supermarkets and other businesses, and reportedly caused more than 30 deaths.

The demonstrations began last October in Santiago over a now-suspended increase in subway fares. Other regions joined in the protests, expanding their grievances to inequality and the cost of healthcare.

A number of churches across Chile have been attacked and looted amid the demonstrations in the country.

Rioters have previously set fires inside St. Francis Borgia Church; in January the church suffered heavy damage after fires were set and demonstrators blocked firefighters trying to access the Church.

“Violence is evil, and whoever sows violence reaps destruction, pain and death. Let us never justify any violence,” for political or social purposes, the archbishop said.

“The poor are the most affected” by these acts of vandalism, the archbishop said, as he expressed solidarity with parishioners from both churches destroyed by the fires.

Aós called on Catholics not to lose faith or hope, because “love is stronger.”

“Let us not justify the unjustifiable. God does not want violence. We will come together to do acts of penance and reparation as a believing community,” he said.

A version of this report was first published by ACI Prensa, CNA’s Spanish-language news partner. It has been translated and adapted by CNA.

Pave set stones in a wrapped design create this of-the-moment fashion ring. 5 ecommerce trends you need to follow for maximum growth in 2022. These items and services are mentioned because i believe in them and wish to assist you in improving your life.