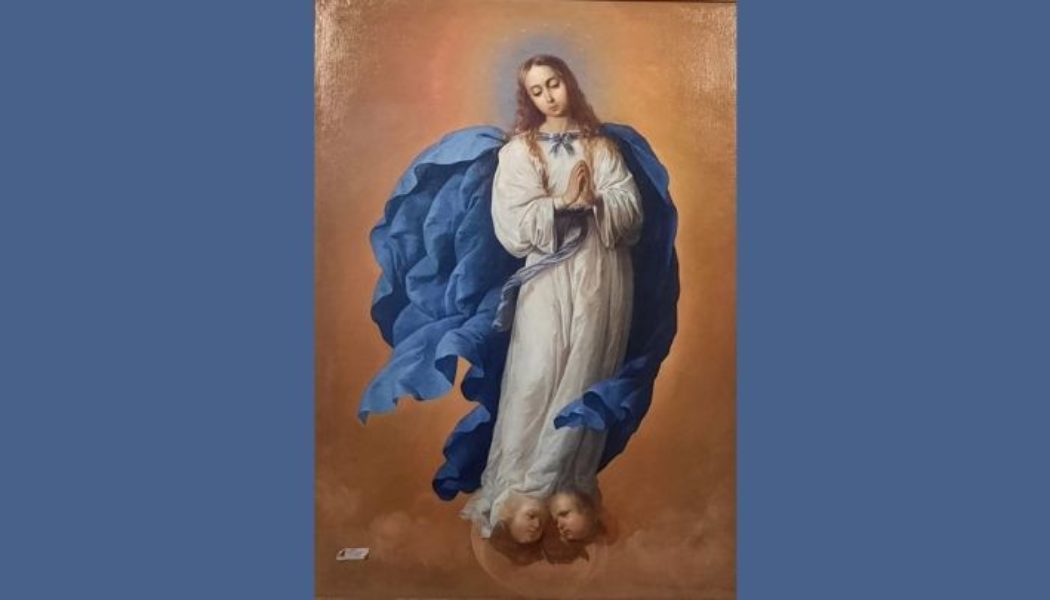 A painting representing the Immaculate Conception, produced in 1661 by Francisco de Zurbaran, almost fell into oblivion.

This rare masterpiece by a great Spanish master is not kept in a museum. Francisco de Zurbaran’s painting of the Immaculate Conception sits discreetly behind grills in a recess of the church of Saint Gervais-Saint Protais, in Langon, a small town in the Gironde department of southwestern France.

The work was painted in the last years of the painter’s life, and has as its subject the Virgin Mary at the moment of the Assumption, praying, wrapped in a blue cape billowing in the air which seems to push her towards heaven. Zurbaran painted several canvases representing the Immaculate Conception, in which the Virgin appears almost as a child, with the moon under her feet and a crown of twelve stars above her head, as described in the Apocalypse. One of them is kept at the Museum of Fine Arts in Budapest, two others at the Prado Museum, and others in the church of St. John the Baptist in Seville and in the diocesan museum of Sigüenza, also in Spain. This abundance of paintings has not prevented the Immaculate Conception of Langon from being requested by European museums for numerous exhibitions. In recent years, it has traveled to Paris, Bilbao, and Dusseldorf, among others.

Interestingly, the painting’s location was unknown for years. It was discovered in the sacristy of Saint Gervais in 1966 by Fr. Ferbos, the parish priest. The official story is that the priest discovered the painting hanging high in the sacristy, covered with dust and pigeon droppings. However, the description posted inside the church tells a much more entertaining story. The canvas had been covered with paint to prevent thieves from stealing it, and its true identity and value had been forgotten. Children taking catechism class had used the painting as target for their chewing gum. After it had been hit many times, presumably the weight of the gum on the extra layer of paint made it peel off, and the masterpiece was revealed. The painting was originally donated to the city of Langon in 1863 by Emile Pereire, deputy of the 3rd district of Gironde from 1863 to 1869. It was classified as a historical monument on March 5, 1969.