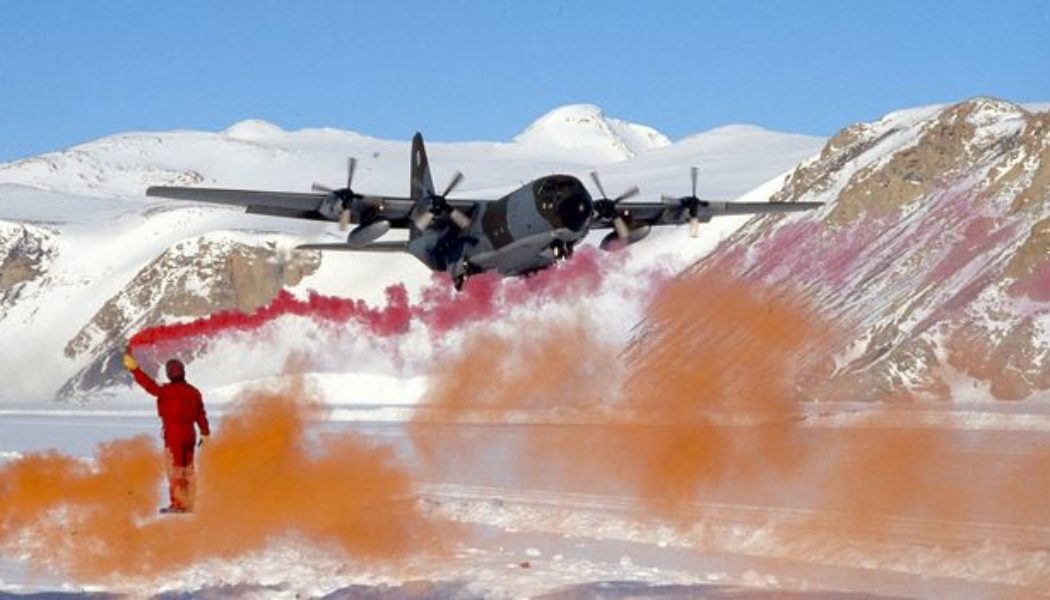 In 1928, the bullet-shaped aircraft that Wilkins and his co-pilot Carl Ben Eielson flew was the cutting-edge craft of its day. Their Lockheed Vega was designed by Jack Northrop, who later founded the Northrop Corporation, famous for the B-2 Stealth Bomber. Earlier in the year, in another Vega, the two pilots had become the first to cross the Arctic Ocean from Alaska to Svalbard, Norway.

On the opposite side of the world, the explorers raced above the Antarctic Peninsula. In just 20 minutes, the Vega covered 40 miles (65km), a distance that would have taken months to traverse on foot. After nearly 4.5 hours, with half his fuel spent, Wilkins opened a hatch, dropped a proclamation (a flag and document) claiming the land for King George V of Great Britain, and reluctantly turned back.

In the 10-hour flight – filmed by two movie cameras on board – the Australian and his American colleague had crossed at least 1,000 miles (1,600km) of previously unrecorded Antarctic territory. During the flight they were able to get a view over 100,000sq miles (258,998sq km) of Antarctica, according to estimates from the time. Wilkins named the bays, land and mountains he discovered after his supporters: Hearst Land, Mobiloil Inlet and Lockheed Mountains. “For the first time in history, new land was being discovered in the air,” he wrote.

From his flight, Wilkins mistakenly concluded that the Antarctic peninsula was three islands rather than an extension of the mainland.

But the Australian soon had company in Antarctica. In January 1929, American explorer Richard Byrd’s “million-dollar expedition” had arrived in the Bay of Whales, near Scott’s base for his ill-fated expedition. This was the largest expedition yet sent to Antarctica, and with it came three aircraft and the men to build an underground base in which to overwinter. It was named Little America, and three radio antennae marked its spot. A large slice of Western Antarctica was named after Byrd’s wife, Marie Byrd Land.

Wilkins’s arctic flight had been a triumph, but many doubted that Byrd had flown to the North Pole two years earlier as he claimed. Now the American had to beat his rival to the South Pole, but he lost nerve. He feared that his Trimotor was too heavy, unreliable, and thirsty for such a flight.

The winter months gave Byrd a brief respite, but by November 1929 Wilkins was on his way back to Antarctica, and Jack Northrop told the newspapers that “we will see a race between Wilkins and Byrd”. Byrd also knew that an Australian expedition led by Douglas Mawson was on its way to explore from the coastline around Enderby Land by air to claim it for Britain, and a Norwegian expedition was heading to roughly the same area, to use the same method. Among them was explorer Ingrid Christensen, who became the first woman to see Antarctica, fly over it, and maybe even the first woman to set foot on the Antarctic mainland.

So, at 3.30pm on Thanksgiving Day, 28 November 1929, Byrd took off for the South Pole and headed out into the polar wasteland.

The plane raced across the Ross Ice Shelf, and then laboured to climb up the Liv Glacier to the High Polar Plateau and the pole, but the glacier brought them face to face with a giant ice wall that appeared to be at least 1,500ft (500m) too high for the aircraft to fly over.

Desperately they cast their supplies out of the plane until, at the last minute, close to the ice wall, an updraft picked them up and threw them over the top.

Ten hours later, at 1am on 29 November 1929, Byrd reached the South Pole and dropped the US flag. Wilkins made several further flights, but none came close to rivalling Byrd’s achievement.

Then on Christmas Day, tragedy struck: another Norwegian aviator took off on a short flight, a storm blew up and was never seen again.

Princess aurora ring. , if it doesn’t integrate seamlessly with your policy systems), then its value might not be so high as far as insurance. What rights you have over your data.