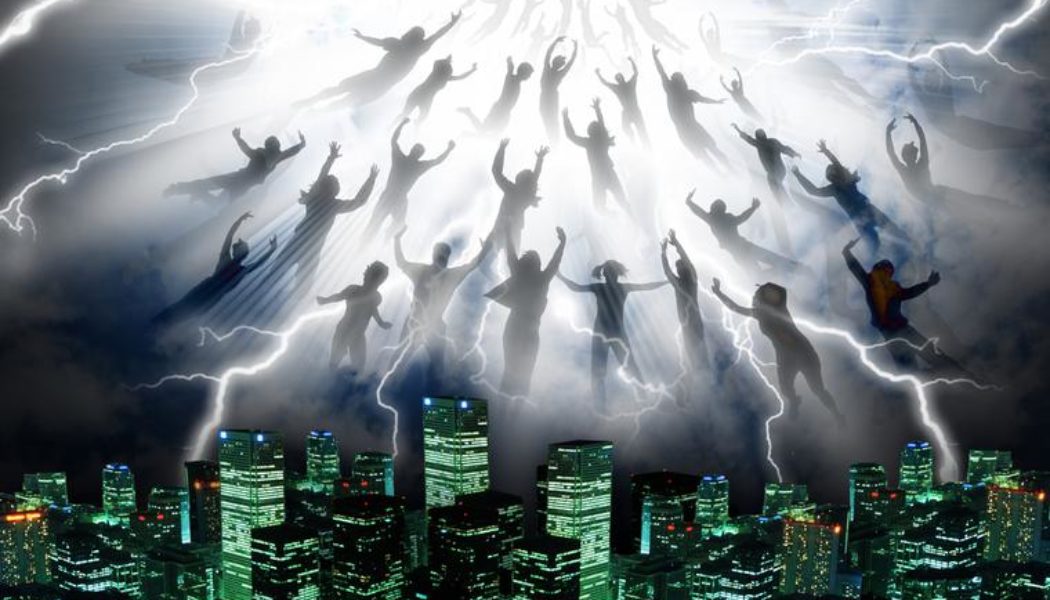 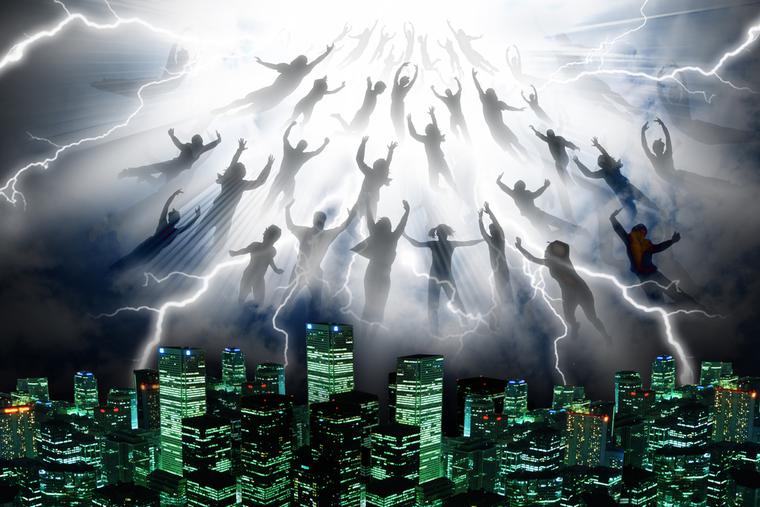 The house was empty. “Where is everyone?” I thought. I was 9 years old, and had just returned home from school. We lived in a quiet town, and my parents were rarely away.

“Mom?” I called out. Nothing. I began to feel anxious. It occurred to me that my parents may have been “raptured,” taken up suddenly into the heavens by Jesus. Was I “left behind?” But I knew that my urgent prayer to Jesus at the age of 5 had saved me once and for all. If my parents were raptured, the Tribulation was now beginning, and seven years of horrific trials would follow, and I was all alone and — “Carl? Is that you?”

My mother came through the door. She had been visiting the neighbor. My anxiety about the Rapture evaporated. For a while.

A turning point came in my second year of Bible college. One day, after a visiting speaker gave an impassioned talk about the Rapture, I asked a favorite professor, “What did you think? Do you believe Christ is returning soon to rapture out true believers?” He chuckled and answered, “I think that when Christ comes again, he will surprise nearly everyone, just as he did when he first came.” He planted a seed.

A dozen years later, my book Will Catholics Be “Left Behind”? A Catholic Critique of the Rapture and Today’s Prophecy Preachers (2003) was published by Ignatius Press. It was the culmination of several years of study, during which time my wife and I — both raised in evangelical Protestant homes and graduates of evangelical Bible colleges — entered the Catholic Church in 1997. The book was, without doubt, a work of emotional catharsis.

The Rise of ‘Rapture Anxiety’

I’d never heard the term “rapture anxiety” until I read a Sept. 27 CNN article titled, “For some Christians, ‘rapture anxiety’ can take a lifetime to heal.” The author, A.J. Willingham, begins with the testimony of an “exvangelical” named April Ajoy, who had experienced “religious trauma” because of the fear and stress caused by belief in the Rapture, being “left behind” and being killed during the post-apocalyptic time of tribulation. The article quotes a former “Baptist preacher and religious scholar,” Darren Slade, who has since abandoned Christianity:

“This is a real thing. It’s a chronic problem. …This is a new area of study, but in general, our research has revealed that religious trauma leads to an increase of anxiety, depression, paranoia and even some OCD-like behaviors: ‘I need to say this prayer of salvation so many times,’ ‘I need to confess my sins so often.’”

A “latent fear of an impending, inevitable end,” the article states, is common “among communities of religious trauma survivors.” There are accusations of fear tactics, propaganda and emotional coercion.

The article then shifts to the topic of leaving Christianity altogether:

“For Christians who begin to question their beliefs, the fear of what could happen if they name their doubts out loud can be just as overwhelming as rapture anxiety itself.”

The article focuses in conclusion on how those who are leaving Christianity say they “don’t feel the church matches their personal values. They are tired of what they see as a system peddling in shame and rejection.”

First, I’m certainly not dismissive of the very real anxiety and distress caused by belief in the Rapture. But anxiety and difficulty are real for everyone in some way or another. The past three years have seen an escalation in the number of cases of people suffering from severe anxiety, depression and fear. The severe and negative impact of COVID-19 lockdowns cannot be ignored, especially for the elderly, the young and those without much of a support system. None of us can avoid anxiety; the question is: how do we address it?

Secondly, the Rapture event is indeed a theological falsehood, created in the 1830s by ex-Anglican priest John Nelson Darby (1800-1882) and popularized by Cyrus Scofield, Hal Lindsey and Tim LaHaye. But if someone wishes to avoid a “latent fear of an impending, inevitable end,” how do they handle the reality of death?

Ironically, many Rapture believers — including best-selling authors Lindsey and LaHaye — claim most Christians living today won’t have to face death because they will be raptured. However, LaHaye died in 2016 and Lindsey is now 92. So while it’s wise to flee from unreality of the Rapture, there is still the reality of death itself. What to do?

Third, what about truth? The CNN article quotes Ajoy as saying that “you shouldn’t have to be afraid of the answer.” I agree. But if truth really is the goal, leaving Christianity because of a belief that isn’t biblically or historically accurate is irrational. For me, recognizing that the Rapture theology could and should be questioned was not a reason to flee, but to go deeper. Plus, citing one’s “personal values” only raises more questions: Why those values? Based upon what? How do they fit into a larger view of life, death and reality?

My wife and I became Catholic for many reasons, but the Eucharist was central to our decision. We came to recognize that the Blessed Sacrament is “the sacrament of the kingdom of God,” as the Orthodox theologian Father Alexander Schmemann wrote in The Eucharist.

“A sacrament,” Schmemann explained, “is both cosmic and eschatological … oriented toward the kingdom which is to come.” (“Eschatology” comes from the Greek word eschata, meaning “last things.”) As the Catechism states (1491, 1402), the Eucharist is “an anticipation of the heavenly glory.”

In April 2003, St. John Paul II released his final encyclical, Ecclesia de Eucharistia, on the Eucharist and the Church. He offered some insights into the “eschatological tension” faced by Christians. He notes “the eschatological thrust which marks the celebration of the Eucharist” and states: “The Eucharist is a straining towards the goal, a foretaste of the fullness of joy promised by Christ (cf. John 15:11) …” Members of the mystical body of Christ are already participating in the reality of the Kingdom of God; those “who feed on Christ in the Eucharist need not wait until the hereafter to receive eternal life: they already possess it on earth …” (EE, 18).

However, we live in tension between the “now” of this world and the “future” of life hereafter. We are on earth, but meant for heaven; we are spiritual, but also material; we are sinful, and saved. Dying, we are filled with divine life. Our preparation for eternal life and participation in the fullness of the Kingdom must be centered upon the Eucharist.

First, the “eschatological tension kindled by the Eucharist expresses and reinforces our communion with the Church in heaven” (EE 19). Mass is a real participation in the heavenly worship (see Revelation 4:1-11; 7:10). The Eucharist “is truly a glimpse of heaven appearing on earth.” The Eucharist brings us into intimate union with the communion of the saints.

Second, “the eschatological tension inherent in the Eucharist … plants a seed of living hope in our daily commitment to the work before us” (EE, 20). Our heavenly destination gives us the proper perspective on the real meaning and purpose of life. We see the cares of this world in the light of eternity. The Eucharist is a commitment to continual conversion and a growth in holiness that is the “fruit of a transfigured existence and a commitment to transforming the world in accordance with the Gospel …” Rather than fear, then, we have joy!

Third, the Eucharist is profoundly Marian. While Mary uniquely contained her Lord and Savior, we receive the Body, Blood, Soul, and Divinity of her Son into our very bodies. The Magnificat, John Paul II says in his encyclical, “reflects the eschatological tension of the Eucharist.” It points to God’s astounding plan of salvation. “The Eucharist has been given to us so that our life, like that of Mary, may become completely a Magnificat!”

Mary, approached by the angel Gabriel, was “greatly troubled …” (Luke 1:29). But being told, “Do not be afraid,” she accepted the word (and Word!) of God. Later, she pondered and held “these things … in her heart.” Those things are the truths about God’s loving plan of salvation and the identity of her Son. Christ did come, and he will come again. May we say each day: “Amen. Come, Lord Jesus!” (Revelation 22:20).