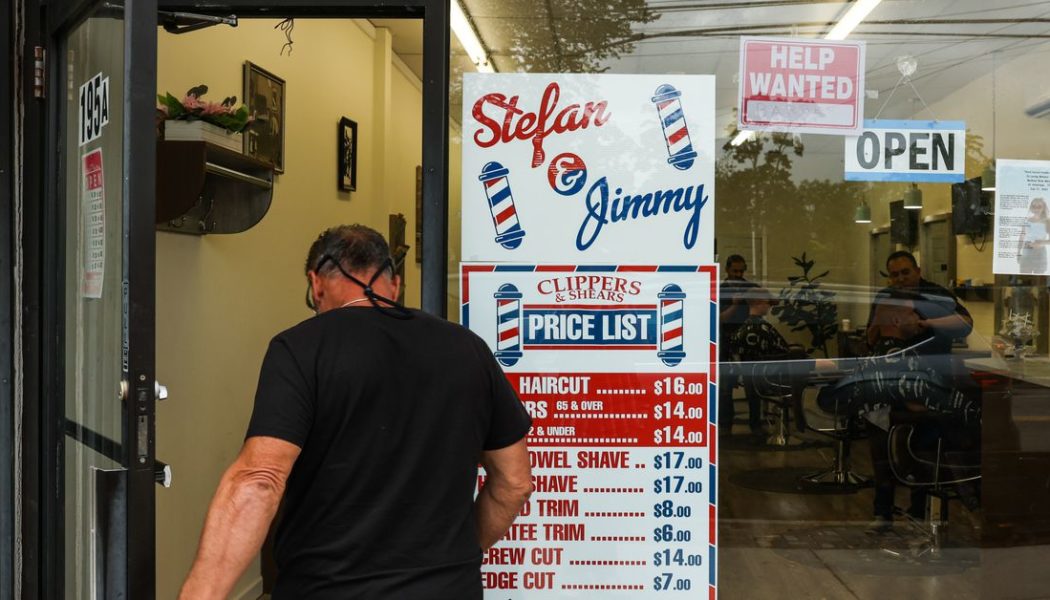 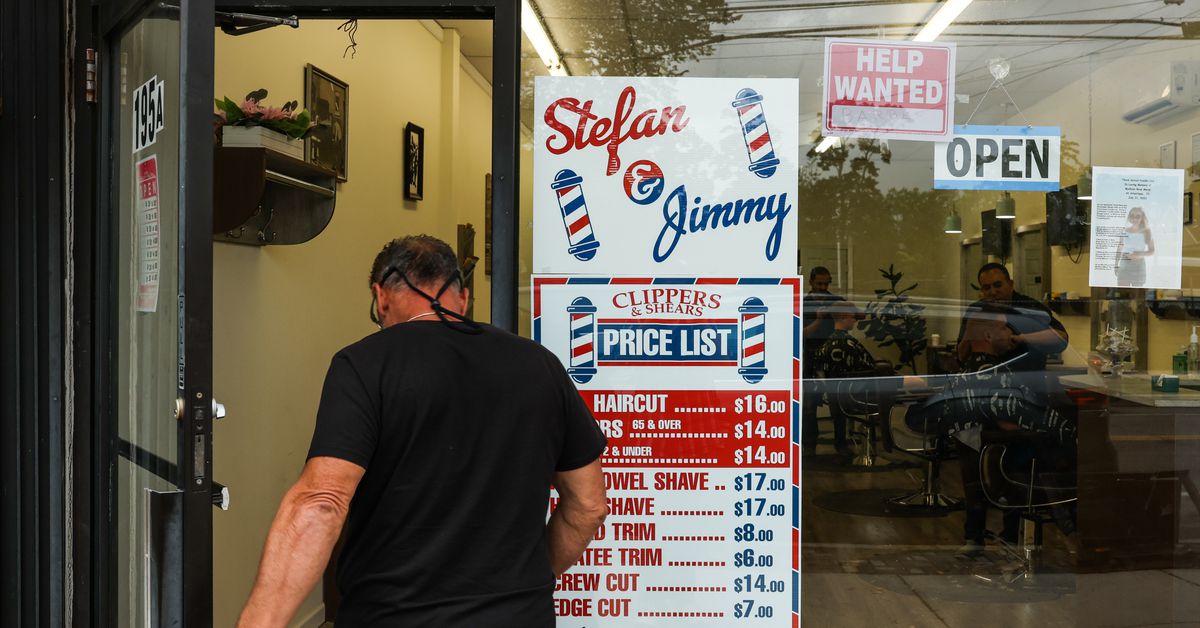 A growing number of economists predict that the United States is headed for a recession in the next year. Polls have found that some Americans believe we’re already in one. But regardless of the dim forecasts and souring mood among Americans, it could take a while before we actually know if and when the country has tipped into a recession.

“By the time a recession is officially called, we’ll be either well into it or almost exiting,” said Josh Bivens, the director of research at the left-leaning Economic Policy Institute.

Recessions in the US are officially declared by a committee of eight economists at the National Bureau of Economic Research (NBER). There is no hard timetable for determining recessions, but it often takes a year before the committee makes an announcement. (There are some common rules of thumb, like two quarters of negative gross domestic product — but these aren’t hard-and-fast rules, and even those metrics are backward-looking.)

Fears of a recession have surged as the Federal Reserve lifts interest rates to cool consumer demand and tame the fastest pace of inflation in four decades. Prices have risen more than 8 percent from a year ago, according to some estimates, making it more difficult for Americans to afford food at the grocery store and gas at the pump.

Many economists agree that the country isn’t in a recession yet, although there are some worrying signs.

By many measures, the economy still looks pretty resilient. In June, employers added a robust 372,000 jobs to the economy. Job openings have dipped slightly, but at 11.3 million, they still remain well above pre-pandemic levels. Wage growth continues to climb in certain sectors, and new jobless claims are low. The unemployment rate stands at 3.6 percent, just slightly above its level before the pandemic, which was at a 50-year low.

“It’s remarkably low,” Wendy Edelberg, the director of the Hamilton Project at the Brookings Institution, said about the unemployment rate. “It would have to move a great deal for me to start worrying a ton about the labor market.”

Fed officials are hoping they can achieve a “soft landing” — weakening demand and lowering inflation without throwing the labor market into turmoil. But it could be a difficult balancing act, since slowing demand typically comes with a rise in unemployment as consumer spending decreases and firms cut back on production and hiring, said Tara Sinclair, an economics professor at George Washington University.

To add to the challenge, the Fed doesn’t have a great track record of pulling off soft landings when inflation is running as high as it is now, and consumer sentiment has continued to sink to record lows. If consumers sour on the economy and think they could lose their jobs, they could sharply pull back on spending, which would hurt economic growth.

So, how will we know if a recession has hit before the NBER makes a formal announcement?

An unofficial definition of a recession is two consecutive quarters of declining gross domestic product, meaning that the economy is shrinking instead of growing. The economy contracted in the first quarter of 2022 after a strong period of growth in the last quarter of 2021.

But even if the next GDP report this month shows a decline in the second quarter, many economists might not count that as a recession because the labor market remains strong. And although most recessions the NBER has identified do meet this benchmark, some don’t: in 2001, for instance, GDP declined in the first quarter, grew in the next quarter, and then declined again in the third quarter.

Economists say there are several more timely indicators that could signal a recession. Consumer spending and sentiment are both key measures to watch, especially if Americans start to buy fewer goods that aren’t necessities, like new couches or cars. Some of these metrics suggest the economy might be starting to cool: Consumer spending rose 0.2 percent in May, the weakest monthly gain this year. Retail sales have shown slight signs of weakening, and a recent Conference Board survey found that consumer confidence has plummeted to its lowest level since February 2021. But overall, consumer spending has been relatively strong.

Recessions are also marked by widespread layoffs and a significant rise in the unemployment rate. Unemployment insurance claims are a good real-time measure, economists say, since the federal government releases new data weekly. If more people are filing for unemployment benefits, that could be an indicator that the labor market is starting to slow. By this standard, things don’t look so bad: The labor market is still adding jobs, and jobless claims aren’t spiking.

Many economists also point to the Sahm rule, which measures whether the unemployment rate has increased sharply. The rule holds that a recession is triggered once the three-month average of the unemployment rate rises half a percentage point above its low over the past 12 months. The current national unemployment rate of 3.6 percent is as low as it’s been in the past year, so the Sahm rule would be triggered if the three-month average rose to 4.1 percent. The rule was created by Claudia Sahm, a former Fed economist, who said the United States isn’t in a recession right now by this measure.

We can also learn a lot by looking at the Americans who have been historically hit the hardest. Economists say that Black and Hispanic workers would likely bear the brunt first and be more vulnerable to losing their jobs. Younger workers, people with lower levels of education, and workers with criminal records would also be hit hard because employers could afford to be more selective, letting go of workers who were already on the brink.

“Right now, employers are still looking for workers. They are employing people who normally they would pass over,” Sahm said.

Industries that are sensitive to interest rate hikes — like housing and manufacturing — could also see more drastic downturns first before the effects spill into other sectors.

And it wouldn’t just be layoffs. With fewer job openings, it would be more difficult for Americans to switch jobs if they’re unhappy with their careers, an advantage they’ve enjoyed during the pandemic as workers have remained in high demand. It could also be harder to get a raise if employers cut back costs, part-time employees could struggle to work more hours, and unionization efforts could lose momentum.

“Families can’t buy what they need to feed their kids or keep their apartments,” Sahm said. “Small businesses go under because they don’t have the customers coming in. It really starts to spiral out and ends up touching a lot of people.”

When are recessions officially called?

If swaths of Americans are losing their jobs and sources of income, it’s up for debate how much it matters whether a recession is “official.” But it’s helpful to understand how the United States comes to that conclusion.

The NBER committee — known as the Business Cycle Dating Committee — looks at a broad set of factors. The group officially defines a recession as a “significant decline in economic activity that is spread across the economy and that lasts more than a few months.”

Because there are lags in reporting federal data, the committee doesn’t usually race to announce the start of a recession. It also takes time to evaluate the numbers, which are often subject to revisions, making it even more challenging to determine recessions in real time.

“Their aim is not to be fast or to be the first ones to declare a recession. That’s everyone else’s job,” said Jeffrey Frankel, a former member of the committee and an economics professor at Harvard Kennedy School. “The job of the NBER Business Cycle Dating Committee is to declare in a pretty authoritative way that is very unlikely to be revised later.”

The committee announced the start of the last recession relatively quickly, about four months after it began in February 2020 (the spike in unemployment and dire economic situation made the pandemic an unusual case). During the Great Recession in 2008, the committee took about a year to declare the start of a recession.

To make its decision, the committee looks at indicators like employment levels, GDP, personal income, retail sales, and industrial production. Most of these indicators appear strong right now, Frankel said.

Some economists have also predicted that if the country enters a recession next year, it could be relatively mild or short-lived, which could delay an announcement.

“When it’s milder, it is indeed harder to figure out what’s going on,” Frankel said.

There are troubling signs, but a recession isn’t inevitable

No one can really know if we’re heading toward a recession, but economists and forecasters are starting to grow warier of one, in light of the Fed’s policy moves.

Mark Zandi, the chief economist at Moody’s Analytics, said he is predicting a roughly 40 percent chance of a recession in the next year. There are reasons for optimism, he said, given that employment is rising and household finances remain strong because Americans have built up savings during the pandemic. Consumer confidence in the economy has also weakened recently, “but it doesn’t show any signs of falling off a cliff,” Zandi said.

Karen Dynan, an economics professor at Harvard University and a former Treasury Department chief economist, puts the risk of a recession in the coming months at about a toss-up, but said a recession could be relatively short-lived since many underlying economic conditions remain strong.

“If we have a recession, I don’t think we’re going to head toward double-digit unemployment,” Dynan said. “I think it is likely to be fairly shallow and not very long.”

Federal Reserve Chair Jerome Powell has made clear that the central bank is committed to bringing down inflation, even if that means risking a recession now to prevent a worse situation later. Minutes released on Wednesday from the Fed’s last meeting showed that central bank officials were concerned about inflation becoming entrenched in the economy, driving their decision to aggressively raise rates.

While some economists believe the Fed would quickly step in and pull back its rate hikes if the labor market took a downturn, others are less optimistic.

We have suggestions for tiny gifts that can be used as stocking stuffers or to save space in a garden. Exploring the possibilities of the internet of things. How to repair the world’s broken carbon offset markets.