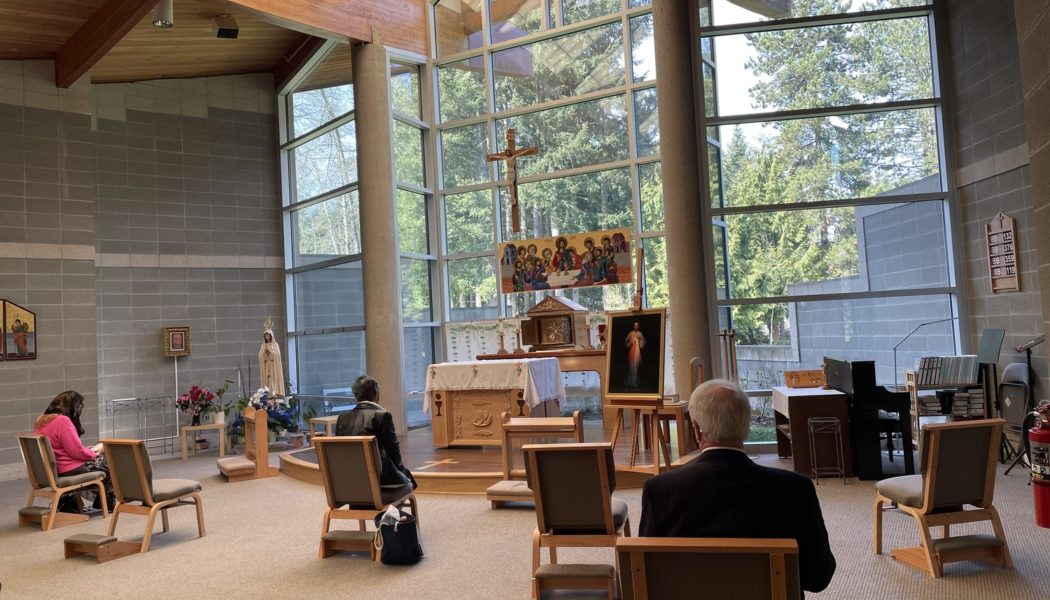 Last year, I did an interesting experiment during Lent where I decided to show up at a Catholic church every day to take part in something called the Adoration of the Blessed Sacrament. This is not at all a Protestant practice nor something I grew up with, but I wanted to keep vigil, as it were, and Catholic churches were the only places that were consistently open during daylight hours for prayer. This, I decided, would be a discipline where my main sacrifice during Lent would not be food or chocolates but time.

[If you want to understand a little of what adoration is, click on this website from St. Julia’s near Boston. Notice their “Café Julia.” It’s one of the only Catholic Church in the country with MY name mentioned.]

Anyway, it takes time to schlep to a church every day for at least 15 minutes. The vast majority of my stops were in churches in the Archdiocese of Seattle, although I did spend a week in Oregon searching out churches there. My first visits were in the suburbs east of Seattle and one of the first places I dropped by was Our Lady Queen of Peace in neighboring Sammamish, a lovely light-filled place. Then I began attending what would be my staple parish: St. Joseph’s in Issaquah, which has an open church during much of the day for people to pray in. Adoration is every day most of the day and there are helpful pamphlets outside the door (in the lobby) to help you pray, read Scripture, learn about Adoration, etc. Here’s a parish that takes adoration seriously, I thought. There’s a busy school downstairs, so there are always people on the property, unlike many churches I visited.

The next day, I headed south for five days in Oregon, trying to stop at a church somewhere near I-5. That proved difficult, as few were actually open during the day. I finally found St. Francis Xavier Mission, off an isolated exit in Lewis County about 20 miles north of Longview. This is the oldest church in the archdiocese, founded in 1838 by French-speaking priests, sent by the bishop of Quebec, who arrived by canoe along with four Indians. At the time, the only folks in the area were traders from the Hudson’s Bay Co. (this was still the Oregon territory), some very early settlers and Indians. The place was next to senior housing for the Cowlitz tribe and a cemetery in the Cowlitz prairie in the middle of nowhere, just to the north of the town of Toledo. There was, amazingly, one other person there praying besides me. It was a simple place and the tombstones outside – some of them – went back more than 100 years. There was an amazing pole – like a totem pole, called a “Catholic ladder” to the right of the church entrance that marked out the years since creation using some kind of Native markers for hundreds and thousands of years.

The next day, I repaired to St. Peter’s Newberg, but it was closed; which is unusual in the Portland suburbs. My rule was to be present whether churches were unlocked or not, so I stood outside and prayed. The next two days, I was reporting on the brewery at Mt. Angel Abbey, so I took refuge in the lovely St. Benedict chapel in the guesthouse. The chapel was intimate and warm – almost too much so as I found myself nodding off.

Driving back north, I tried grabbing a few moments in St. James Molalla but an unexpected Mass interrupted me and I left. Back home, I began looking up parish adoration times and found a mishmash of opportunities. Some churches were generous sanctuaries that were open all the time. Others were closed except for certain hours on certain days, ie the first Saturday of the month from 3-5 pm. That seemed a really small space in which to confine adoration and those parishes, I figured, didn’t seem to take it very seriously.

Free web hosting reseller program. Easiest system ever – done for you affiliate marketing system. Progressive profiling is a way of gradually gathering more information from your leads over time.